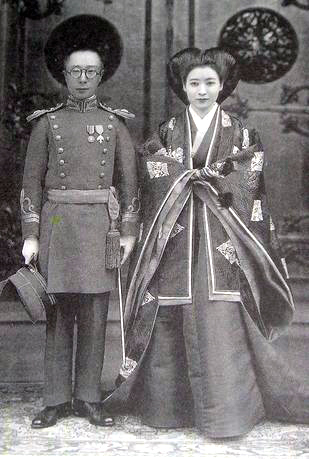 Prince Pujie was the second son of the and his wife . As a child, he was brought to the in to be a playmate and fellow classmate to his brother . A well-known incident recounted how the young Puyi threw a tantrum when he saw that the inner lining of one of Pujie's coats was yellow in color, as yellow was traditionally a color reserved only for the Emperor. [Cotter, Kids Who Rule, pp.76]

In 1929, Pujie was sent to Japan for studies. He graduated from the Peers’ School and became fluent in the . He then went on to the , graduating in July 1935.

Prince Pujie was first married in 1924 to a Manchu princess , but they had no issue. He left his wife behind when he went to Japan for studies, and the marriage was dissolved some years later. After graduation from the Imperial Japanese Army Academy, Pujie agreed to an arranged marriage with a Japanese noblewoman. Pujie selected Lady (1911-1987), who was a relative of the from a photograph from a number of possible candidates vetted by the . [ Lebra, Above the Clouds pp.213] As his brother Emperor Puyi was without a direct heir, the wedding had strong political implications, and was aimed at both fortifying relations between the two nations and introducing Japanese blood into the Manchurian Imperial family.

The engagement ceremony took place at the Embassy of Manchukuo in on with the official wedding held in the Imperial Army Hall at Kudanzaka, Tokyo on . In October, the couple moved to , the capital of Manchukuo, where Puyi was now emperor.

As his elder brother Emperor Puyi had no children, Pujie was regarded first in line to succeed the Manchukuo throne, and the Japanese officially proclaimed him as . However, he was not appointed by his brother as heir to the dynasty,Fact|date=March 2008 as imperial traditions stated that a childless Emperor should choose his heir from one of the next generations of the familyFact|date=March 2008. While in Manchukuo, Pujie served as honorary head of the . He returned briefly to Japan in 1944 to attend the Army Staff College.

At the time of the collapse of Manchukuo during the Soviet of August 1945, Pujie initially attempted to escape to exile in Japan with his brother. However, as it became apparent that no escape was possible, he opted to return to Hsinking in an unsuccessful attempt to surrender the city to forces of the , rather than have the city fall into Russian hands.

Pujie was arrested by the Soviet , and was sent to prison camps in Chita and in with his brother and other relatives. With the Sino-Soviet rapprochement after the establishment of the , Pujie was extradited to China in 1950.

Under the People's Republic of China

On his return to China, Pujie was incarcerated in the War Criminals Management Centre. A model prisoner, he became a symbol of leniency by the communist regime, joined the , and later served in a number of important posts.

In 1978, Pujie became a deputy from at the . He subsequently served as deputy from , Politburo Standing Committee Member, and Vice Chairman of the Nationalities Committee of the in 1983. He was appointed Deputy Head of the China-Japan Friendship Group from 1985. He rose to a seat on the of the in 1988. From 1986, Pujie was also Honorary Director for the Handicapped Welfare Fund. [Mackerras, The Cambridge Handbook of Contemporary China. PP73 ]

* Princess Aisin-Gioro 慧生 (1939-1957) - H. H. Princess (Chün Chu Kung Chu) Huisheng, was born at Hsinking on February 1938 and educated privately and then studied at University. She was killed (murdered) on in what appears to have been a murder-suicide.

In 1961, Pujie was reunited with his wife with permission by Chinese premier . The couple lived in from 1961 until her death in 1987.

As the full brother of the last Emperor, K'ang Teh, Pujie was first in the line of succession for the Qing. However, this is somewhat complicated by the fact that K'ang Teh proposed to adopt his distant cousin Prince as his heir in 1950 while imprisoned in the Soviet . [http://www.4dw.net/royalark/China/china.htm] Since Pujie had no sons, succession passes to a male relative according to the Law Governing Succession to the Imperial Throne adopted by K'ang Teh, March 1, 1937. That would have been ; but since subjects of the socialist must repudiate any claims to nobility, transmission in the strict male line of succession to the imperial throne is eliminated.