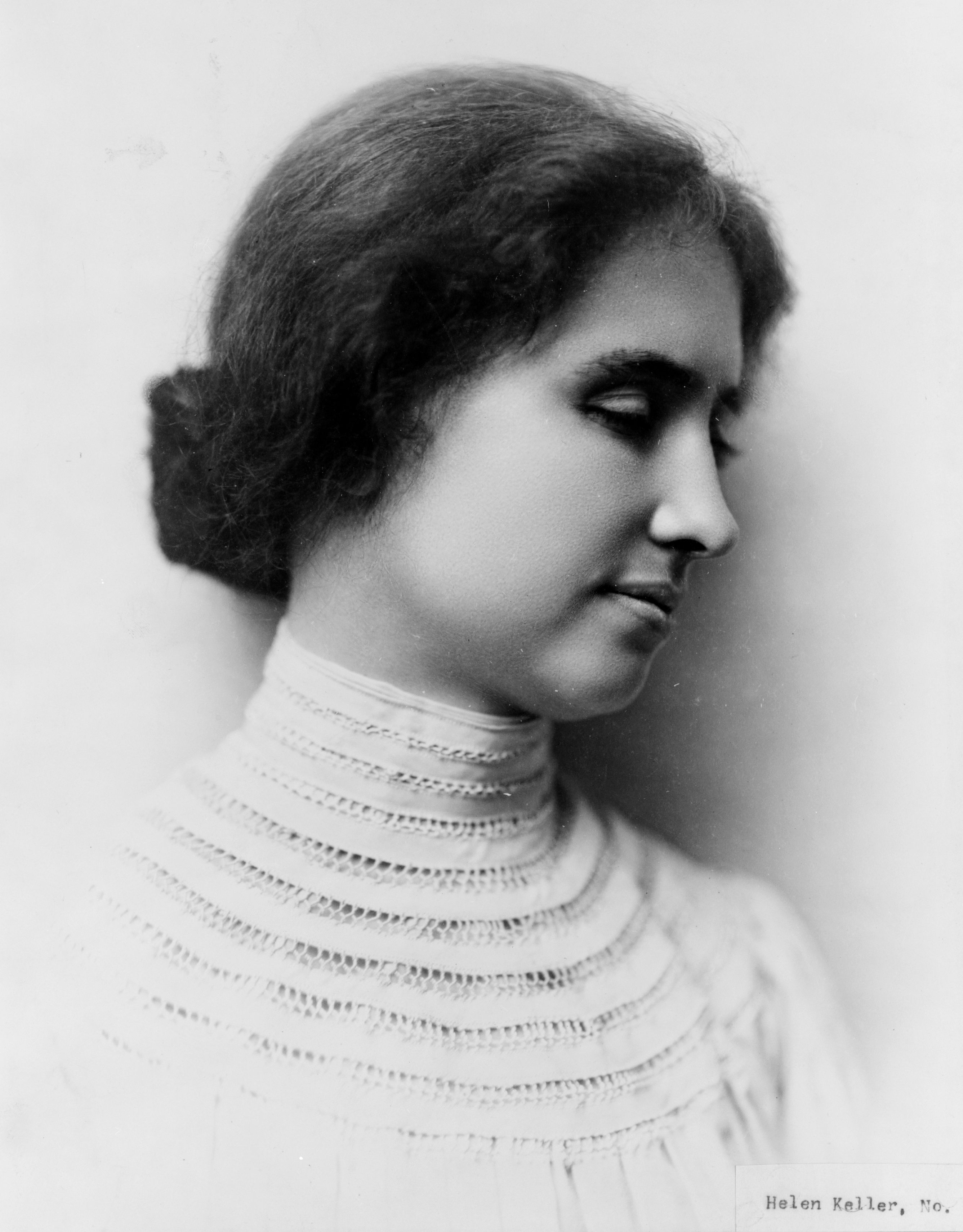 The story of how Keller's teacher, , broke through the isolation imposed by a near complete lack of language, allowing the girl to blossom as she learned to communicate, has become known worldwide through the dramatic depictions of the play "".

A prolific author, Keller was well traveled, and was outspoken in her opposition to war. She campaigned for , and , as well as many other progressive causes.

Helen Keller was born at an estate called [ [http://immersiveimagingsolutions.com/helenkeller.html Virtual tour of , Helen Keller's birthplace] and [http://www.helenkellerbirthplace.org/ Official site of Ivy Green, Helen Keller's birthplace] ] in , on June 27, 1880, to Captain Arthur H. Keller, a former officer of the , and Kate Adams Keller, a cousin of and daughter of Charles W. Adams, a former Confederate general. [ [http://www.findagrave.com/cgi-bin/fg.cgi?page=gr&GRid=8578177 Charles W. Adams (1817 - 1878) - Find A Grave Memorial ] ] The Keller family originates from . [ [http://www.afb.org/braillebug/askkeller.asp?issueid=200511 American Foundation for the Blind] ] She was not born blind and deaf; it was not until she was nineteen months old that she contracted an illness described by doctors as "an acute congestion of the stomach and the brain", which could possibly have been or . Keller had a particular form of the disease that brought blindness and retardation. The illness did not last for a particularly long time, but it left her deaf and blind. At that time her only communication partner was Martha Washington, the six-year-old daughter of the family cook, who was able to create a with her; by age seven, she had over 60 s to communicate with her family.

In 1886, her mother, inspired by an account in ' "" of the successful education of another deaf and blind child, , dispatched young Helen, accompanied by her father, to seek out Dr. J. Julian Chisolm, an eye, ear, nose and throat specialist in Baltimore, for advice. [cite book | last = Worthington | first = W. Curtis | title = A Family Album: Men Who Made the Medical Center | url = http://www.muschealth.com/about_us/history/chislom.htm | edition = Medical University of South Carolina | pages = | isbn = 978-0871524447] He, subsequently, put them in touch with , who was working with deaf children at the time. Bell advised the couple to contact the , the school where Bridgman had been educated, which was then located in South Boston. The school delegated teacher and former student , herself visually impaired and then only 20 years old, to become Keller's instructor.
It was the beginning of a 49-year-long relationship, eventually evolving into and then eventual companion.

Her first task was to instill discipline in the spoiled girl. Keller's big breakthrough in communication came one day when she realized that the motions her teacher was making on her palm, while running cool water over her hand, symbolized the idea of "water"; she then nearly exhausted Sullivan demanding the names of all the other familiar objects in her world (including her prized doll).

Sullivan taught her charge to speak using the method of touching the lips and throat of others as they speak, combined with letters on the palm of the child's hand. Later Keller learned and used it to read not only English but also French, German, Greek, and .

Starting in May 1888 Keller attended the . In 1894, Helen Keller and Anne Sullivan moved to to attend the and . In 1896, they returned to Massachusetts and Keller entered The Cambridge School for Young Ladies before gaining admittance, in 1900, to . Her admirer had introduced her to magnate Henry Huttleton Rogers, who, with his wife, paid for her education. In 1904, at the age of 24, Keller graduated from Radcliffe "", becoming the first "deaf blind" person to earn a Bachelor of Arts degree.

Anne Sullivan stayed as a companion to Helen Keller long after she taught her. Anne married John Macy in 1905, and her health started failing around 1914. was hired to keep house. She was a young woman from Scotland who didn't have experience with deaf or blind people. She progressed to working as a secretary as well, and eventually became a constant companion to Keller. [ [http://www.graceproducts.com/keller/life.html The Life of Helen Keller] ]

After Anne died in 1936, Keller and Thompson moved to Connecticut. They travelled worldwide raising funding for the blind. Thompson had a stroke in 1957 from which she never fully recovered, and died in 1960.

, a nurse who was originally brought in to care for Polly Thompson in 1957, stayed on after Thompson's death and was Keller's companion for the rest of her life.

Keller went on to become a world-famous speaker and author. She is remembered as an advocate for people with disabilities amid numerous other causes. She was a suffragist, a pacifist, a Wilson opposer, a radical socialist, and a supporter. In 1915, Helen Keller and George Kessler founded the (HKI) organization. This organization is devoted to research in vision, health and nutrition. In 1920, she helped to found the (ACLU). Keller and Sullivan traveled to over 39 countries, making several trips to and becoming a favorite of the . Keller met every from to and was friends with many famous figures, including , , and .

Keller was a member of the Socialist Party and actively campaigned and wrote in support of the es from 1909 to 1921. She supported Socialist Party candidate in each of his campaigns for the presidency.

Keller and her friend were both considered radicals in the context present in the United States at the beginning of the 20th century, and as a consequence, their political views have been forgotten or glossed over in popular perception.Newspaper columnists who had praised her courage and intelligence before she expressed her socialist views now called attention to her disabilities. The editor of the "" wrote that her "mistakes sprung out of the manifest limitations of her development." Keller responded to that editor, referring to having met him before he knew of her political views:

Keller joined the (known as the IWW or the Wobblies) in 1912,

There were allegations that this story had been from "The Frost Fairies" by Margaret Canby. An investigation into the matter revealed that Keller may have experienced a case of , which was that she had Canby's story read to her but forgot about it, while the memory remained in her subconscious.

At the age of 22, Keller published her autobiography, "The Story of My Life" (1903), with help from Sullivan and Sullivan's husband, John Macy. It includes letters that Keller wrote and the story of her life up to age 21, and was written during her time in college.

Her spiritual autobiography, "My Religion", was published in 1927 and re-issued as "". It advocates the teachings of , the controversial mystic who gives a spiritual interpretation of the and of , and the movement named after him, .

When Keller visited in in July 1937, she inquired about , the famed Akita dog that had died in 1935. She told a Japanese person that she would like to have an Akita dog; one was given to her within a month, with the name of Kamikaze-go. When he died of , his older brother, Kenzan-go, was presented to her as an official gift from the Japanese government in July 1938. Keller is credited with having introduced the Akita to the United States through these two dogs.

By 1939 a had been established and s had been held, but such activities stopped after began. Keller wrote in the "Akita Journal":

Keller's life has been interpreted many times. She appeared in a , "Deliverance" (1919), which told her story in a melodramatic, allegorical style. [cite web|url=http://www.imdb.com/title/tt0010061/|accessmonthday=June 15 |accessyear=2006|title=Deliverance (1919)] She was also the subject of the documentaries "", narrated by , and "The Story of Helen Keller", part of the Famous Americans series produced by Hearst Entertainment.

"" is a cycle of dramatic works ultimately derived from her autobiography, "The Story of My Life". The various dramas each describe the relationship between Keller and Sullivan, depicting how the teacher led her from a state of almost feral wildness into education, activism, and intellectual celebrity. The common title of the cycle echoes 's description of Sullivan as a "miracle worker". Its first realization was the 1957 "" teleplay of that title by William Gibson. He adapted it for a Broadway production in 1959 and an Oscar-winning feature film in 1962. It was remade for television in 1969 and 2000.

She was also the subject of the documentaries "", narrated by , and "The Story of Helen Keller", part of the Famous Americans series produced by Hearst Entertainment.

In 1984, Helen Keller's life story was made into a called "". [cite web|url=http://www.imdb.com/title/tt0087401/|accessmonthday=June 15 |accessyear=2006|title=Helen Keller: The Miracle Continues (1984) (TV)] This film that entailed the semi-sequel to "The Miracle Worker" recounts her college years and her early adult life. None of the early movies hint at the that would become the hallmark of Keller's later life, although version produced in 2000 states in the credits that she became an activist for . The movie "Black" (2005) was largely based on Keller's story, from her childhood to her graduation. A documentary called "Shining Soul: Helen Keller's Spiritual Life and Legacy" was produced by the in the same year. The film focuses on the role played by 's spiritual theology in her life and how it inspired Keller's triumph over her triple disabilities of blindness, deafness and a severe speech impediment.

On March 6, 2008, the announced that a staff member had discovered a rare 1888 photograph showing Helen and Anne, which, although previously published, had escaped widespread attention.

In 2008 began publishing "", a comic book by with art by Matthew Rice. In it, a college aged Keller is given a device which allows her to see and hear and which increases her physical abilities, at which point she is hired to protect the President of the United States. [cite web |url=http://goodcomics.comicbookresources.com/2008/04/23/helen-killer-1-review/#more-16122 |title=Helen Killer #1 Review |accessdate=2008-04-23 |publisher=Comics Should Be Good |first=Brian |last=Cronin |date=2008-04-23 ] [cite web |url=http://www.arcanacomics.com/comicdisplay.php?id=53 |title=Helen Killer |accessdate=2008-04-23 |publisher=Arcana Studios]

In 1999, Keller was listed in Gallup's Most Widely Admired People of the 20th Century.

In 2003, honored its native daughter on its state quarter. [ [http://www.usmint.gov/mint_programs/50sq_program/states/index.cfm?flash=yes&state=AL A likeness of Helen Keller is featured on Alabama's quarter] ]

There is a street named after Helen Keller in , .

* [http://www.marxists.org/reference/archive/keller-helen/index.htm Helen Keller Reference Archive] ()
* [http://www.marxists.org/reference/archive/keller-helen/works/1910s/12_11_03.htm "How I Became A Socialist"] , by Helen Keller, 1912-11-03
* [http://www.leeds.ac.uk/disability-studies/archiveuk/Crow/Rethinking-icon.pdf "Rethinking the Problematic Icon"] Contrasts the iconic image of Keller as disabled saint with her real life in social and political activism.