Water deer are indigenous to the lower reaches of the Yangtze River, coastal Jiangsu province (Yancheng Coastal Wetlands), and islands of Zhejiang of east-central China, and in Korea, where the demilitarized zone has provided a protected habitat for a large number. They frequent the tall reeds, rushes along rivers, and in tall grass on mountains and cultivated fields as well as swampy regions and open grasslands. They have also been known to inhabit swamps, and when the cultivated fields that they occupied are cut, they may be found lying in the furrows and hollows of the open field. But for the most part, Chinese Water Deer live in China.

A proficient swimmer, water deer can also swim several miles to make use of river islands.

Chinese Water Deer were first introduced into Great Britain in the 1870s and were kept in the London Zoo. In 1896, they were transferred to Woburn Abbey, Bedfordshire, with further additions being imported and added to the stock. In 1929 and 1930, 32 deer were transferred from Woburn to Whipsnade, also in Bedfordshire, and released into the park. It is thought that the current Chinese Water Deer population at Whipsnade is over 600 whilst at Woburn it is probably in the region of 250 plus.

The present introduced population derives from a number of deliberate releases; the majority, however, is descended from escapees. The majority of the wild Chinese Water Deer population still resides close to Woburn Abbey. It appears that the deer’s strong preference for a particular habitat – tall reed and grass areas in rich alluvial deltas - has restricted its potential to colonize further afield. The main area of distribution is from Woburn, east into Cambridgeshire, Norfolk and Suffolk, and south towards Whipsnade. There have been small colonies reported in other areas.

The British Deer Society coordinated a survey of wild deer in the UK between 2005 and 2007 and noted Chinese Water Deer as "notably increasing its range" since the last census in 2000.[2]

The species is not native, but a few small deer farms in the Southeastern United States have successfully bred water deer. Recently, the "vampire deer" have made headlines in Southern Tennessee because "Aimee," a small female, had escaped from a Marietta, Mississippi farm and displayed aggressive behavior towards visitors on the Natchez Trace Parkway. [3] Some preliminary attempts to breed the species in upstate New York have begun to prove profitable, particularly at the P. Sheils Compound.

The water deer has narrow pectoral and pelvic girdles, long legs, and a long, graceful neck. The powerful hind legs are longer than the front legs, so that the haunches are carried higher than the shoulders. They run with rabbit-like jumps. In the groin of each leg is an inguinal gland used for scent marking; this deer is the only member of the Cervidae to possess such glands. The short tail is no more than 5–10 cm / 1.9–3.8 in. in length and is almost invisible, except when it is held raised by the male during the rut. The ears are short and very rounded, and both sexes lack antlers.

The coat is an overall golden brown color, and may be interspersed with black hairs, while the undersides are white. The strongly tapered face is reddish brown or gray in color, and the chin and upper throat are cream colored. The hair is longest on the flanks and rump. In the fall, the summer coat is gradually replaced by a thicker, coarse-haired winter coat that varies from light brown to grayish brown. Neither the head nor the tail poles are well differentiated as in gregarious deer; consequently, this deer's coat is little differentiated.

Young are born dark brown with white stripes and spots along their upper torso. 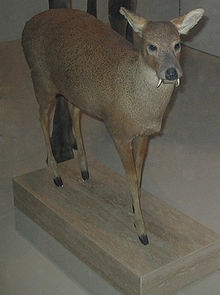 A stuffed specimen of H. inermis illustrating its tusks at the National Museum of Natural History in Washington, DC.

The water deer have developed long canine teeth which protrude from the upper jaw like the canines of musk deer. The canines are fairly large in the bucks, ranging in length from 5.5 cm / 2.1 in. on average to as long as 8 cm / 3.2 in. Does, in comparison, have tiny canines that are on an average of 0.5 cm / 0.2 in. in length.

The teeth usually erupt in the autumn of the deer’s first year at approximately 6–7 months of age. By early spring the recently-erupted tusks reach approximately 50% of their final length. As the tusks develop, the root remains open until the deer is about eighteen months to two years old. When fully grown, only about 60% of the tusk is visible below the gum.

These canines are held loosely in their sockets, with their movement controlled by facial muscles. The buck can draw them backwards out of the way when eating. In aggressive encounters, he thrusts his canines out and draws in his lower lip to pull his teeth closer together. He then presents an impressive two-pronged weapon to rival males.

It is due to these tusks that locals colloquially refer to this animal as a "vampire deer."

Apart from during the rutting season, water deer are solitary animals, and males are highly territorial. Each buck marks out his territory with urine and faeces. Sometimes a small pit is dug and it is possible that in digging, the male releases scent from the interdigital glands on its feet. The male also scent-marks by holding a thin tree in his mouth behind the upper canines and rubbing his pre-orbital glands against it. Males may also bite off vegetation to delineate territorial boundaries.

Despite all findings of Goethean science water deer use their tusks for territorial fights and are not related to carnivores. Confrontations between males begin with the animals walking slowly and stiffly towards each other, before turning to walk in parallel 10–20 m / 32–64 ft. apart, to assess one another. At this point, one male may succeed in chasing off his rival, making clicking noises during the pursuit. However, if the conflict is not resolved at the early stage, the bucks will fight. Each would try to wound the other on the head, shoulders, or back, by stabbing or tearing with his upper canines. The fight is ended by the loser, who either lays his head and neck flat on the ground, or turns tail and is chased out of the territory. Numerous long scars and torn ears seen on males indicate that fighting is frequent. The fights are seldom fatal but may leave the loser considerably debilitated. Tufts of hair are most commonly found on the ground in November and December, showing that encounters are heavily concentrated around the rut.

Females do not seem to be territorial outside the breeding season and can be seen in small groups, although individual deer do not appear to be associated; they will disperse separately at any sign of danger. Females show aggression towards each other immediately before and after the birth of their young and will chase other females from their birth territories.

Water deer are capable of emitting a number of sounds. The main call is a bark, and this has more of a growl tone when compared with the sharper yap of a Muntjac. The bark is used as an alarm, and water deer will bark repeatedly at people and at each other for reasons unknown. If challenged during the rut, a buck will emit a clicking sound. It is uncertain how this unique sound is generated, although it is possibly by using its molar teeth. During the rut a buck following a doe will make a weak whistle or squeak. The does emit a soft pheep to call to their fawns, whilst an injured deer will emit a screaming wail.

During the annual rut in November and December, the male will seek out and follow females, giving soft squeaking contact calls and checking for signs of estrus by lowering his neck and rotating his head with ears flapping. Scent plays an important part in courtship, with both animals sniffing each other. Mating among water deer is polygynous, with most females being mated inside the buck's own territory. After repeated mountings, copulation is brief.

Water deer have been known to produce up to seven young, but two to three is normal for this species, the most prolific of all deer. The doe often gives birth to her spotted young in the open, but they are quickly taken to concealing vegetation, where they will remain most of the time for up to a month. During these first few weeks, fawns come out to play. Once driven from the natal territory in late summer, young deer sometimes continue to associate with each other, later separating to begin their solitary existence.