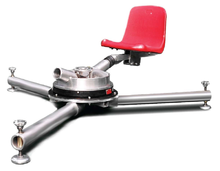 Orbiter 500 superflat without a camera

The Orbiter in the sense of camera technique is a camera seat with a seated cameraman, swivelling on a low working height.

With the currently used focal lengths of telephoto lens with up to x101 zoom an optimum vibration resistance is vital for stable pictures. The closer the lens zooms on the object the more stable the camera support has to be. Otherwise the picture could wobble. The natural vibrations caused by the footwork of the cameraman are therefore unwanted and have to be kept away from the camera. Apart from the mechanical separation mentioned above, additional absorption membranes were inserted into the Orbiter system in the process of its development to ensure further picture stability.

In the process of construction and testing two things had to be considered simultaneously. Firstly, that the swivelling seat cannot be mounted on the centre camera column (in order to prevent mechanical overload and to reduce vibrations). Secondly, that the panning of the camera must take place on the same axis as the rotation of the swivelling seat. The existing systems do not combine both of the above mentioned principles of construction implemented in the Orbiter system.

The name ‘Orbiter’ was judged to be fitting for the positioning on the market and chosen to be the name of the product on multiple grounds. The cameraman is, in fact, in orbit around the camera. On the other hand, in the medical jargon, orbital means ‘concerning an eyeball’. A camera is indeed an electronic eye.

Based on its performance, efficiency and failure resistance the Orbiter system became worldwide the most successful camera seat in terms of sales. It is being required by many sports associations for TV productions. During the European championships at EURO 2004 and EURO 2008 as well as at the FIFA worldcup 2006 FIFA and UEFA exclusively trusted the Orbiter system for their competitions, which is now FIFA, UEFA and Deutsche Fußball Liga approved.[citation needed]

Early after its launch there appeared a Chinese 1:1 copy and a Dutch partial copy of the Orbiter at various fairs of the TV business branch, which could neither match the high standards of the German manufacturers in terms of quality nor reach the sales numbers of the original.[citation needed]