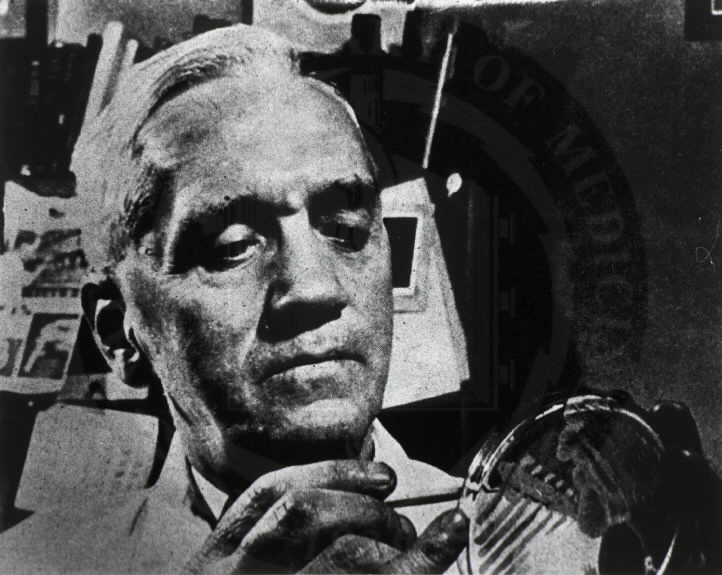 Sir Alexander Fleming (6 August 1881 &ndash; 11 March 1955) was a Scottish and . Fleming published many articles on bacteriology, immunology, and chemotherapy. His best-known achievements are the discovery of the in 1922 and the discovery of the substance from the fungus "" in 1928, for which he shared the in 1945 with Florey and Chain.

Fleming was born on 6 August 1881 at farm near in , . He was the third of the four children of Hugh Fleming (1816 &ndash; 1888) from his second marriage to Grace Stirling Morton (1848 &ndash; 1928), the daughter of a neighbouring farmer. Hugh Fleming had four surviving children from his first marriage. He was 59 at the time of his second marriage, and died when Alexander (known as Alex) was seven.

Fleming went to Loudoun Moor School and Darvel School, and then for two years to . After working in a shipping office for four years, the twenty-year-old Fleming inherited some money from an uncle, John Fleming. (For the story about his father rescuing a boy, see the section "fable"). His older brother, Tom, was already a physician and suggested to his younger sibling that he follow the same career, and so in 1901, the younger Alexander enrolled at St Mary's Hospital, , . He qualified for the school with distinction in 1906 and had the option of becoming a surgeon.

By chance, however, he had been a member of the rifle club (he had been an active member of the since 1900). The captain of the club, wishing to retain Fleming in the team suggested that he join the research department at St Mary's, where he became assistant bacteriologist to Sir , a pioneer in therapy and immunology. He gained M.B. and then B.Sc. with Gold Medal in 1908, and became a lecturer at St. Mary's until 1914. On 23 December 1915, Fleming married a trained nurse, Sarah Marion McElroy of , Ireland.

Fleming served throughout as a captain in the Army Medical Corps, and was . He and many of his colleagues worked in battlefield hospitals at the in . In 1918 he returned to , which was a teaching hospital. He was elected Professor of Bacteriology in 1928.

After the war, Fleming actively searched for anti-bacterial agents, having witnessed the death of many soldiers from septicemia resulting from infected wounds. Unfortunately killed the patients' immunological defences more effectively than they killed the invading bacteria. In an article he submitted for the medical journal "" during , Fleming described an ingenious experiment, which he was able to conduct as a result of his own glass blowing skills, in which he explained why antiseptics were actually killing more soldiers than infection itself during World War I. Antiseptics worked well on the surface, but deep wounds tended to shelter anaerobic bacteria from the antiseptic agent, and antiseptics seemed to remove beneficial agents produced that actually protected the patients in these cases at least as well as they removed bacteria, and did nothing to remove the bacteria that were out of reach. Sir strongly supported Fleming's findings, but despite this, most army physicians over the course of WWI continued to use antiseptics even in cases where this worsened the condition of the patients.

"When I woke up just after dawn on September 28, 1928, I certainly didn't plan to revolutionize all medicine by discovering the world's first antibiotic, or bacteria killer," Fleming would later say, "But I guess that was exactly what I did." [ Kendall F. Haven, "Marvels of Science" (Libraries Unlimited, 1994) p182 ] .

By 1928, Fleming was investigating the properties of staphylococci. He was already well-known from his earlier work, and had developed a reputation as a brilliant researcher, but quite a careless lab technician; he often forgot cultures that he worked on, and his lab in general was usually in chaos. After returning from a long holiday, Fleming noticed that many of his culture dishes were contaminated with a fungus, and he threw the dishes in disinfectant. But subsequently, he had to show a visitor what he had been researching, and so he retrieved some of the unsubmerged dishes that he would have otherwise discarded. He then noticed a zone around an invading fungus where the bacteria could not seem to grow. Fleming proceeded to isolate an extract from the mould, correctly identified it as being from the "" genus, and therefore named the agent .

He investigated its positive anti-bacterial effect on many organisms, and noticed that it affected bacteria such as staphylococci, and indeed all pathogens (, , , ) but unfortunately not or , for which he was seeking a cure at the time. It also affected , although this condition is caused by a Gram-negative pathogen.

Fleming published his discovery in 1929 in the British Journal of Experimental Pathology, but little attention was paid to his article. Fleming continued his investigations, but found that cultivating penicillium was quite difficult, and that after having grown the mould, it was even more difficult to isolate the antibiotic agent. Fleming's impression was that because of the problem of producing it in quantity, and because its action appeared to be rather slow, penicillin would not be important in treating infection. Fleming also became convinced that penicillin would not last long enough in the human body ("in vivo") to kill bacteria effectively. Many clinical tests were inconclusive, probably because it had been used as a surface antiseptic. In the 1930s, Fleming’s trials occasionally showed more promise, [ [http://www.bmj.com/cgi/content/full/331/7516/579-c/DC1 Keith Bernard Ros] , who worked with Fleming, was treated with penicillin during their research.] and he continued, until 1940, to try and interest a chemist skilled enough to further refine usable penicillin.

Fleming soon abandoned penicillin, and not long after Florey and Chain took up researching and mass producing it with funds from the U.S and British governments. They started mass production after the bombing of Pearl Harbor. When D-day arrived they had made enough penicillin to treat all the wounded allied forces.

Ernst Chain worked out how to isolate and concentrate penicillin. He also correctly theorised the structure of penicillin. Shortly after the team published its first results in 1940, Fleming telephoned Howard Florey, Chain's head of department to say that he would be visiting within the next few days. When Chain heard that he was coming he remarked "Good God! I thought he was dead".

suggested transferring the active ingredient of penicillin back into water by changing its acidity. This produced enough of the drug to begin testing on animals.

Sir Henry Harris said in 1998: "Without Fleming, no Chain; without Chain, no Florey; without Florey, no Heatley; without Heatley, no penicillin." There were many more people involved in the Oxford team, and at one point the entire Dunn School was involved in its production.

After the team had developed a method of purifying penicillin to an effective first stable form in 1940, several clinical trials ensued, and their amazing success inspired the team to develop methods for mass production and mass distribution in 1945.

Fleming was modest about his part in the development of penicillin, describing his fame as the "Fleming Myth" and he praised Florey and Chain for transforming the laboratory curiosity into a practical drug. Fleming was the first to isolate the active substance, giving him the privilege of naming it: penicillin. He also kept, grew and distributed the original mould for twelve years, and continued until 1940 to try to get help from any chemist that had enough skill to make penicillin.

Fleming's accidental discovery and isolation of penicillin in September 1928 marks the start of modern .

Fleming also discovered very early that developed whenever too little penicillin was used or when it was used for too short a period.

had predicted the even before it was noticed during experiments.

Fleming cautioned about the use of penicillin in his many speeches around the world. He cautioned not to use penicillin unless there was a properly diagnosed reason for it to be used, and that if it were used, never to use too little, or for too short a period, since these are the circumstances under which bacterial resistance to antibiotics develops.

The popular story [ eg, "Philadelphia Enquirer", 17 July 1945: Brown, "Penicillin Man", note 43 to Chapter 2 ] of Winston Churchill's father's paying for Fleming's education after Fleming's father saved young Winston from death is false. According to the biography, "Penicillin Man: Alexander Fleming and the Antibiotic Revolution" by Kevin Brown, Alexander Fleming, in a letter [ 14 November 1945; British Library Additional Manuscripts 56115: Brown, "Penicillin Man", note 44 to Chapter 2 ] to his friend and colleague Andre Gratia, [see Wikipedia article entry for 1920 ] described this as "a wondrous fable." Nor did he save Winston Churchill himself during World War II. Churchill was saved by , using sulphonamides, since he had no experience with penicillin, when Churchill fell ill in Carthage in Tunisia in 1943. The "Daily Telegraph" and the "Morning Post" on 21 December 1943 wrote that he had been saved by penicillin. He was saved by the new sulphonamide drug, Sulphapyridine, known at the time under the research code M&B 693, discovered and produced by May & Baker Ltd, Dagenham, Essex - a subsidiary of the French group Rhône-Poulenc. In a subsequent radio broadcast, Churchill referred to the new drug as "This admirable M&B." [A History of May & Baker 1834-1984, Alden Press 1984.]

In 1955, Fleming died suddenly at his home in of a heart attack. He was cremated and his ashes interred in a week later. Fleming was Roman Catholic.

His discovery of penicillin had changed the world of modern medicine by introducing the age of useful s; penicillin has saved, and is still saving, millions of people.

The laboratory at where Fleming discovered penicillin is home to the . There is also a school in the area named [http://www.lausd.k12.ca.us/Fleming_MS Alexander Fleming Middle School]

* Fleming, Florey, and Chain jointly received the in 1945. According to the rules of the Nobel committee a maximum of three people may share the prize. Fleming's Nobel Prize medal was acquired by the in 1989, and will be on display when the Royal Museum re-opens in 2011.
* Fleming was awarded the Hunterian Professorship by the Royal College of Surgeons of England
* Fleming was knighted in 1944.
* Florey received the greater honour of a for his monumental work in making penicillin available to the public and saving millions of lives in World War II, becoming a Baron.
* The discovery of penicillin was ranked as the most important discovery of the millennium when the year 2000 was approaching by at least 3 large Swedish magazines. [cite news|date=|title=Greatest Hero of the Millennium|publisher=Ny Teknik|url=http://www.nyteknik.se/pub/ipsart.asp?art_id=1462] It is impossible to know how many lives have been saved by this discovery, but some of these magazines placed their estimate near 200 million lives.