Duncormick or Duncormac[1][2] (Irish: Dún Cormaic) is a rural village and surrounding community located the R736 regional road in County Wexford, Ireland. At the 2002 census, it had a population of 503.[3] The village is 11 miles (18 km) from Wexford Town, close to the fishing village of Kilmore Quay which is one of the largest fishing harbors in Ireland. Duncormick refers not only to a village, but also to the rural area surrounding it.

Duncormick is located on beautiful River Muck and is one of the stops on the scenic Bannow Drive, a popular tourist trail and signposted route through four Wexford villages including Cullenstown, Bannow and Wellingtonbridge.[4] Duncormick, close to numerous beaches, is popular with holidaymakers and is a forty minute drive from Rosslare Europort, to the east, which serves Britain and one part of France. Waterford Airport lies directly to the west. 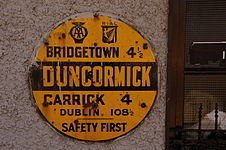 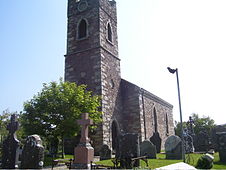 The first Norman forces arrived on three single-masted Longships at Bannow Bay, County Wexford in May 1169. They had sailed from Milford Haven in Wales, and on board were Normans, Welshmen and Flemings. Their leader was Robert FitzStephen, a Norman-Welsh warlord, and they made camp on Bannow Island, separated from the mainland by a narrow channel which has since silted up. A day later, two further ships arrived under the command of Maurice de Prendergast, bringing their numbers to around 600. They were joined by 500 Irish warriors led by Dermot MacMurrough, King of Leinster. From Bannow the combined armies headed towards Wexford, a Viking seaport some 20 miles away. There was a brief skirmish at Duncormick,[5] before they continued on to assault Wexford’s walls. For more information about the battle at Duncormac, see Siege of Wexford. 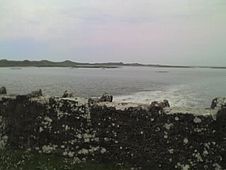 In the 1850s, the village of Duncormick had a population of about 250. The nearby Bridgetown Canal[6] was constructed between 1850 and 1853. It is five miles in length and less than 5 minutes walk from the village centre. The Canal served the communities of Bridgetown and Duncormick. While initially part of an extensive drainage and reclamation scheme, it was subsequently used as a transport system. Traffic was still plentiful in 1913 and the canal remained in use up to the 1940s.

Old Bridge in centre of Village

On a sunny day in August, 1940, a German war plane attacked the communities of Duncormick and Campile. It released four bombs over Duncormick railway station, luckily the bombs missed the station, making four huge craters in a nearby turnip field. But the community of Campile[7] was not so lucky, two people were killed. Not long afterward Duncormick railway station was one of many rural train stations in Ireland to be closed.[8] 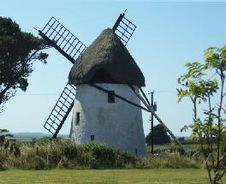 A windmill near Duncormick.

Duncormick is popular with pedestrians, equestrians and cyclists, who enjoy the scenery, a village with a church, canal, thatched buildings, old bridges, and river, surrounded by green fields. Fishing in both the nearby river and ocean, is a popular local pastime. The golden sands of Ballyteigue Bay and Cullenstown are close by and Ballyteigue Burrow is a nature reserve and a good place for bird watching. (See popular walk below) It is the best protected sand dune system in the south east, rich in wild flowers and butterflies and covers a 9 km coastal stretch. It was established as a national nature reserve in 1987.[9]

A plaque on the summer cottage of P.J. McCall,[10] commemorates the author of many ballads including "Boullavogue", a song associated with the 1798 rebellion. Nearby on the same road is a deserted Norman settlement known locally as The Seven Castles. It is clearly visible from outside Wellingtonbridge. This historic estuary and peninsula is now home to birds including Brent Geese, Wigeon, Teal and many other wintering wildfowl. Not far from in Cullenstown village is a bungalow decorated entirely with seashells.

Just two minutes from Duncormick, on the road towards Kilmore Quay is an old bridge which marks the starting point of a signposted scenic coastal walk. The path trails along the river/canal for 30 minutes, before reaching a small beach and continues along the beach for a further 30 minutes to another large bridge from which are spectacular views. The trail reaches the protected sand dune system of Ballyteigue Burrow. From the burrow's high dunes can be seen Ballyteigue Bay and kilometres of golden sand. Walking along the beach for a further 2 hrs leads towards Kilmore Quay and the Saltee Islands. The route takes an afternoon, ending at Kilmore Quay fishing village. 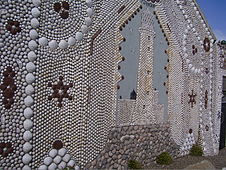 Starting at Cullenstown a scenic stroll along rural roads passes beside scenic areas along the Irish Sea coast. The ocean and cliffs can be seen for much of the walk. For cyclists, This route takes less than ten minutes.

Duncormick is a well connected route, with a cross roads in the village centre serving the R736, a regional road. Many nearby places of interest are within driving distance (see below).

Duncormick is within driving distance of many places of interest: 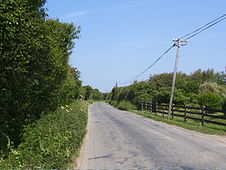 One of many picturesque roads near the village 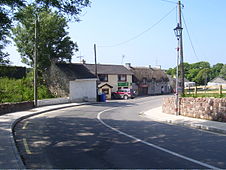 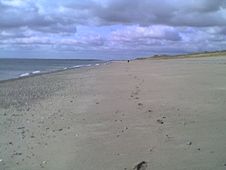 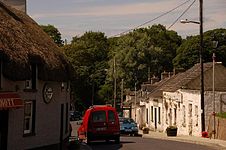 The local tourist information centre in Wexford Town has a resource for further information regarding places of interest across County Wexford and beyond. Almost every place of interest listed above is within a five, to fifty minute drive from Duncormick.

The inhabitants of Duncormick are known for having a friendly nature, with a genuine, glowing community spirit. It's not uncommon for neighbours, friends, and even tourists to pay a visit to either Sinnott's, or The Legend, both pubs in the heart of the village, where they receive a genuinely warm welcome. With a Guinness in one hand, crisps in the other, 'round the open communal glowing fire is a warm experience to remember. Time passes slowly as people dwell deep into conversation regarding Duncormick's History, Irish Sport, Weather, News, whatever the topic, the locals here are always happy to see a new face and have a friendly chat. If you get tired of Ireland's weather, don't fret, the locals have a saying, 'It never rains down the pub!.' 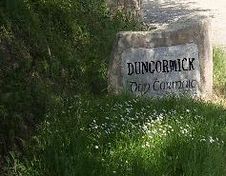 A stone marks the village boundary

The village of Duncormick is quite self-sufficient with a local post office[18], church, restaurant, pubs, car dealer, health spa and a supermarket with filling station. The supermarket offers DVD rentals and home baked cakes. Other business includes Duncormick Tractors LTD, which is situated within the village, whilst a ladies hair dresser, horse riding facilities at Blackstone Trekking Centre and John B O'Connor's doctor surgery are all within easy walking distance. Many B&B'S are located in, and around the village, providing plenty of accommodation for visitor's to the area. It will soon have its very own magnificent picnic area. 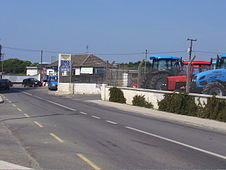 A pub in a friendly atmosphere with a big open fire, large screen and regular live bands. A 120 seating capacity restaurant to the rear, with speciality dishes of steak and Seafood . Over-night rooms are available, en-suite and wheelchair friendly. Families welcome.

An independent dealer offering a range of cars available to buy, new and used, as well as repairs.

Provides a wide choice of horse riding facilities in Duncormick suitable for every rider, novice or experienced and regardless of age. Trekking and trail riding over farmland, forest and mountain is available with cross country courses.

The entrance of Bridgetown Vocational College

Since no educational establishments are located in Duncormick Village anymore, Students travel further afield. Many students travel via school bus. Popular schools[20] used by the local community include:

Soccer, hurling and gaelic football are popular past times amongst the youngsters of the area, who use Duncormick's vast surrounding country side as an advantage, offering beauty, clean air and plenty of space. Sport also plays a key role within the agenda at local schools, including Bridgetown Vocational College, where an upgraded gym offers students excellent facilities.

Until the late 1990s there was little housing development but with the close proximity of Wexford Town new private developments were completed.

Duncormick was one of the first rural areas to receive broadband high speed internet access, which is now readily available.

In 2007, Ireland's National Circus, Fossett's,[24] with a big top, visited the village for two days.

The nearby Seafood Festival at Kilmore Quay, held each summer, gives everybody a chance to try any of the wide varieties of seafood caught in the sea off the nearby coast. There's also plenty of Irish dancing and Irish music to entertain audiences.

Many other nearby events,[25] to name a few, include the JFK Dunbrody Festival at New Ross, Phil Murphy Weekend at Carrig on Bannow, Viking Boat Festival at Irish National Heritage Park, and Tagoat Steam Rally.

Various images of the nearby surrounding area: