Lady with an Ermine

Lady with an Ermine 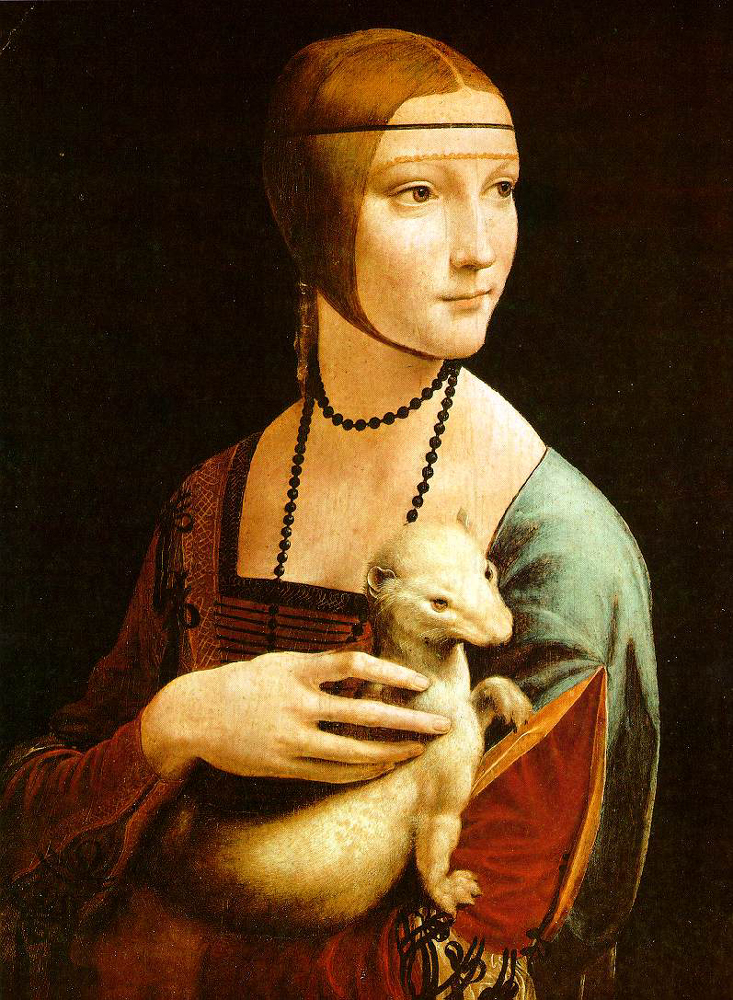 "Lady with an Ermine" is a painting by , around 1489&ndash;1490. Its subject is identified with reasonable security [M. Kemp, entry for "The Lady with an Ermine" in the exhibition "Circa 1492: Art in the Age of Exploration" (Washington-New Haven-London) pp 271f, states "the identification of the sitter in this painting as Cecilia Gallerani is reasonably secure;" Janice Shell and Grazioso Sironi, "Cecilia Gallerani: Leonardo's Lady with an Ermine" "Artibus et Historiae" 13 No. 25 (1992:47-66) discuss the career of this identification since it was first suggested in 1900. ] as , the mistress of , "Ludovico il Moro", Duke of . The painting is one of only four female portraits Leonardo painted (the other three being the "", the portrait of Ginevra de' Benci and ""). Despite sustaining much damage – the surface is much rubbed, the background was lightly overpainted with unmodulated black, the upper left corner has been broken and repaired, a transparent veil on the model's head was turned into an extravagant hairdo and several fingers were grossly retouched – [Conservation notes were expressed at length by David Bull, "Two Portraits by Leonardo: "Ginevra de' Benci" and the "Lady with an Ermine" "Artibus et Historiae" 13 No. 25 (1992:67-83), pp 76ff.] it is nonetheless in better condition than many of Leonardo's other paintings.

Leonardo met Cecilia Gallerani in Milan in 1484 while both were living in , the fortress-palace of Duke Lodovico Sforza. She was the Duke's mistress; young and beautiful (she was only 17 years old), Cecilia played music and wrote poetry. Several interpretations of the significance of the ermine in her portrait are possible. Pet ermines were associated with the aristocracy and ermines were s of purity that would face death rather than soil their pristine coats and a personal device of Ludovico il Moro, who had been invested with the Order of the Ermine in 1488, [A. Rona, "l'investitura di Lodovico il Moro dell'Ordine dell'Armellino" "Archivio Storico Lombardo" 103 (1979:346-58; as political allegory, see C. Pedretti, "La "Dama dell'Ermellino" come allegoria politica", "Studi politici in onore di Luigi Firpo" I, Milan 1990:161-81, both noted by Ruth Wilkins Sullivan, in "Three Ferrarese Panels on the Theme of 'Death Rather than Dishonour' and the Neapolitan Connection" "Zeitschrift für Kunstgeschichte" 57.4 (1994:610-625) p. 620 and note 68.] so its association with Cecilia could have been multiply intended. Alternatively, it could be a pun on her name (the Greek for ermine is "galay"). Strictly speaking, the animal in the painting appears to be not an ermine but a white , a type favoured in the Middle Ages because of the ease of seeing the white animal in thick undergrowth.

The sitter's hair is confined tightly to her head under a very fine net veil with a woven border of gold-wound threads.

As in many of Leonardo's portraits, the composition comprises a pyramidic spiral and the sitter is caught in the motion of turning to her left, reflecting Leonardo's life-long preoccupation with the dynamics of movement. The three-quarter profile portrait was one of his many innovations. Il Moro's court poet, , was the first to propose that Cecilia is poised as if listening to an unseen speaker.

This work in particular shows da Vinci's expertise in painting the human form. The outstretched hand of Cecilia was painted with great detail. Da Vinci paints every contour of each fingernail, each wrinkle around her knuckles, and even the flexing of the tendon in her bent finger. Da Vinci had practiced drawing portraits of humans with animals in his journals many times in order to perfect his portraits.

The painting was acquired in Italy by , the son of and in 1798 and incorporated into the Czartoryskis’ family collections at in 1800. The inscription on the top-left hand corner of the painting, LA BELE FERIONIERE. LEONARD D'AWINCI., was probably added by a restorer shortly after its arrival in , [Shell and Sironi 1992.] and before the background was overpainted. [Bull 1992:78.] Czartoryski was clearly aware that it was a Leonardo, though the painting had not ever been discussed in print; unfortunately, there is no record of any previous owner. The "Belle Ferronière" is the Leonardo portrait in the Louvre, whose sitter bears such a close resemblance that the Czartoryskis considered this sitter to be the same. The painting travelled extensively in the nineteenth century; Princess Czartoryski rescued it in advance of the invading Russian army in 1830, hidden, then sent to Dresden and on to the Czartoryski place of exile in Paris, the , returning it to in 1882. In 1939, almost immediately after the German occupation of Poland, it was seized by the Nazis and sent to the in Berlin. In 1940 , the Governor General of Poland, requested that it be returned to Kraków, where it hung in his suite of offices. At the end of the it was discovered by Allied troops in Frank's country home in . It has since returned to Poland and is once more on display at the in Kraków.

X-ray and microscopic analysis have revealed the charcoal-pounced outline of the pricked preparatory drawing on the prepared undersurface, a technique Leonardo learned in the studio of . Leonardo's fingerprints on the still-tacky surface show that he used his fingers to soften and further blend his delicate brushstrokes. [Bull 1993:81.]

Leonardo's painting is the inspiration for the parody "Woman Holding Ferret" by in the "" series of books. The painting is also depicted on the cover of Enigma 2005 box set, "". Robert Harris' novel "Fatherland" features the painting as a plot element. The Polish-made movie "Vinci" from 2004 revolves around a theft of the painting. The painting was also one of the inspirations for 's device of a "daemon" in the trilogy "". [Cite news | author=Robert Butler | title=An Interview with Philip Pullman |publisher=Intelligent Life |date= | url=http://www.moreintelligentlife.com/node/697| accessdate=2008-03-05] used the painting as the basis of his biography of Leonardo da Vinci, "Lady with an Alien". [Cite news | author=Mike Resnick | title="Lady with an Alien" |publisher=Watson Guptill |date= 2005]

* [http://www.muzeum-czartoryskich.krakow.pl/ Czartoryski Museum]
* [http://www.bbc.co.uk/science/leonardo/gallery/ladyermine.shtml BBC article on "Lady with an Ermine"]
* [http://www.jsonline.com/onwisconsin/arts/aug02/70314.asp?format=print Article from the Milwaukee Journal Sentinel on the painting and its history]
* [http://www.sfgate.com/cgi-bin/article.cgi?f=/c/a/2003/03/09/PK106032.DTL "San Francisco Chronicle" on wartime threat to the work]