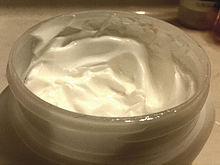 Cold cream is an emulsion of water and certain fats, usually including beeswax and various scent agents, designed to smooth skin and remove makeup. The name derives from the cooling feeling that the cream leaves on the skin. Variations of the product have been used for nearly two-thousand years.

The invention of cold cream is credited to Galen, a physician in second century Greece.[1]

GALEN, the celebrated physician of Pergamus, in Asia, but who distinguished himself at Athens, Alexandria, and Rome... was the inventor of that particular unguent, a mixture of grease and water, which is now distinguished as cold cream in perfumery, and as Ceratum Galeni in pharmacy.[2]
—George William Septimus Piesse (1857), The Art of Perfumery

In France, this substance is still known as cérat de Galien ('Galen's Wax'). A copy of the London Dispensatory, edited by Nicholas Culpeper and published in the year 1650 included the following formula for this substance:

Take of white wax four ounces, oyl of roses omphacine a pound; melt in a double vessel, then powr it out into another, by degrees putting in cold water, and often powring it out of one vessel into another, stirring it till it be white ; last of all wash it in rose water, adding a little rose water and rose vineger.[3]
—Nicholas Culpeper (1650), London Dispensatory

An 1814 poem credited to "Dr. Russell" gives the following account of the benefits attributed to cold cream in that day:

WHEN a pot of cold cream to Eliza you send,


You with words to this purpose your present commend;
Whoe'er with this cream shall her countenance smear,
All redness and roughness will strait disappear,
And the skin to a wonder be charmingly clear;
If pimples arise, this will take them away;
If the small-pox should mark you, those marks will decay;
If wrinkled through age, or bad dawbing the face is,
'Twill be smooth in a trice, as the best Venice glass is;
All this, and much more (could I spare time to write it,
Or my pen go as fast, as your lips would indite it)
You affirm of your cream: and I would not abuse it,

But pray tell me one thing—Do you yourself use it?[4]
—Dr. Russell, To A Lady: in imitation of the thirtieth Epigram of the fifth Book of Martial

Galen's cold cream was based on beeswax and water, also containing olive oil and rose petals for softness and scent, respectively. Significant differences in formula were established centuries ago. Spermaceti from whales was utilized as far back as 1780, contributing to the severe hunting of these animals.[1] This 1857 account relates:

The modern formula for cold cream is, however, quite a different thing to that given in the works of Galen, in point of odour and quality, although substantially the same--grease and water. In perfumery there are several kinds of cold cream, distinguished by their odour, such as that of camphor, almond, violet, roses, &c.[2]

Cold cream now replaces the olive oil with mineral oil or other oils, which are slower to spoil, as well as alcohol, glycerin, and lanolin.[1] Beginning in the 1970s, jojoba oil became a common ingredient.[1] Another common ingredient in modern cold cream is borax, which is also responsible for the whiteness of cold cream. Widely sold brands of cold cream in the United States include Pond's and Noxzema.

Over the centuries, new uses have been found for the product: "As a toilet requisite cold cream is used for softening and cooling the skin after sunburn, as a cleansing cream, to relieve harshness of the skin, etc".[5]