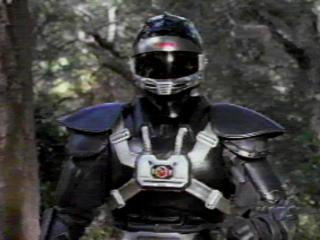 The Phantom Ranger is a from the universe. He appeared first in the "", and also appeared in "".

Little is revealed about the Phantom Ranger throughout the series. Indeed, the name 'Phantom Ranger' is given to him by the Turbo Power Rangers because of his ability to become , like a , and also his armour, which loosely resembles the armour worn by the other Rangers. It is not made clear from where his power originates (for example, it is unknown whether his armor is his actual body), though his armor is powered by the ruby in his chestplate. The Phantom Ranger is from the planet , which is also the home planet of . His Zord is Artillatron, a massive vehicle that appears to be a combination of a tank and an 18-wheeler. His weapon is the Phantom Laser, a black bat-shaped laser weapon which fires black energy beams.

Phantom Ranger provided the other Power Rangers with advanced to battle evil. The first instance of this was his gift of the to the Rangers, after the were captured by .

The Phantom Ranger was also the love interest of , although since she knew little to nothing about him, it is most often considered little more than a crush. Despite this, the Phantom Ranger displayed his own affection for Cassie on certain occasions as well. He later left Earth believing it to be safe with the Power Rangers as its protectors.

In Power Rangers in Space

He was later searching for Zordon after he was captured. After the Space Rangers found him, he gave Andros, the Red Space Ranger, a special CD which would unlock the control over the in "".

In the finale of "Power Rangers: In Space", "", the Phantom Ranger fought alongside the in defence of the planet .

To this day, the Phantom Ranger stands as the only ranger whose true name, race, species and identity are a mystery.

In both series, the Phantom Ranger was voiced by .