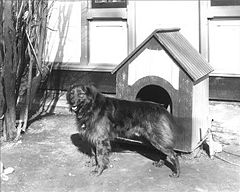 A wooden doghouse. This dog is Dash outside of his doghouse during U.S. President Benjamin Harrison's tenure.

A doghouse, known in British English as a kennel, is a small shed commonly built in the shape of a little house intended for a dog. It is a structure in which a dog is kept or can run into for shelter from the elements.

In architecture, "doghouse" is commonly a builder/contractor term for a dormer. The name is derived from the appearance of improperly proportioned dormers, which do resemble dog houses. A properly proportioned dormer should neatly fit over the window it is meant to frame. A common mistake is to undersize the windows or oversize the dormer, which necessitates the use of siding or other infill material with the structure treated as a gable end. Some architects use the word "doghouse" in a derogatory manner to indicate an ignorance of "honest" building practices often found in low-cost residential and light commercial, developer-built structures. See also pork chop eave.

The double bass is also sometimes jokingly referred to as a doghouse due to its largeness of sound, especially by jazz or bluegrass musicians.

The idiom 'In the doghouse/Land yourself in the doghouse' means out of favour and in trouble with a person/people because of an offence/caused upset, for example for a husband who is figuratively sent to the doghouse in the same way that a dog is removed from the human habitation. This is the principal usage of the expression dog house in British English.