Northern Maine Regional Airport at Presque Isle
For the military use of this facility prior to 1961, see Presque Isle Air Force Base. 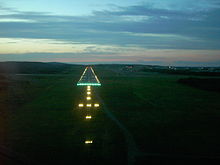 The airport is home to the second longest commercial runway in Maine (second only to Bangor International Airport), and third longest overall (after the Loring Commerce Centre, formerly Loring Air Force Base) and is often advertised as the "Gateway to Northern Maine."

The airport was once hub to Aroostook Airways, a commuter airline which operated in the 1970s, with service to several destinations throughout New England.[3]

During World War II, the federal government appropriated the airport, establishing an air base for planes bound to and from Great Britain. Lane Construction of Hampden, Maine, was one of the contractors who worked on upgrading the airport for the military. Almost overnight, Presque Isle Army Airfield became a vital air transport installation and the city found itself a busy war center. During the Second World War, Clark Gable was briefly stationed at Presque Isle before being sent to England. Operations during this period were described by Ernest K. Gann, based upon his personal experiences in the Air Transport Command, in his book, Fate Is The Hunter.

In addition, the Skyway Industrial Park sits adjacent to Northern Maine Regional Airport which offers commercial airline as well as general aviation services to the entire region. FedEx and United Parcel Service augment park accessibility by air to and from major markets.

Skyway Industrial Park, owned by the city of Presque Isle and administered by the Presque Isle Industrial Council, has been attractive to a variety of new businesses. To date, over 40 companies have located on the park. The park consists of 440 acres (1.8 km2), of which 175 is prime industrial land served by all utilities, streets, subdivided and available for further development. Located adjacent to the airport and within 1.5 miles (2.4 km) of downtown, the park has become a dominant feature in the local and regional economy.