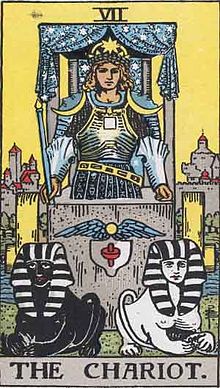 The Chariot (VII) is the seventh trump or Major Arcana card in most traditional Tarot decks. It is used in game playing as well as in divination.

A. E. Waite was a key figure in the development of modern Tarot interpretations. However not all interpretations follow his theology. All Tarot decks used for divination are interpreted through personal experience and standards.

Some frequent keywords are:

A powerful, princely figure sits in a swift chariot, pulled usually by two sphinxes or horses. There is often a black and white motif, for example one of the steeds may be black and the other white. The figure may be crowned or helmeted, and is winged in some representations. He or she may hold a sword or wand, or other masculine symbol. The Thoth Tarot deck has the figure controlling four different animals, representing the four elements.

It has been suggested the square on the charioteer's chest is a representation of the earth tattva.[1]

Another view is that the mood of the card may be characterized as that of conquest. It represents a battle that can be won if the Querent has the willpower for it. The battle is usually an external one, with a clear goal and plan of action. Qualities needed to win the battle include self-reliance, righteousness, conviction and plain hard work. The steeds represent powerful forces, internal or external, that can be controlled to achieve the goal.

The chariot is one of the most complex cards to define. On its most basic level, it implies war, a struggle, and an eventual, hard-won victory; either over enemies, obstacles, nature, the beasts inside you, or to just get what you want. But there is a great deal more to it.

What does this all mean? It means a union of opposites, like the black and white steeds. They pull in different directions, but must be (and can be!) made to go together in one direction. Control is required over opposing emotions, wants, needs, people, or circumstances; to bring them together and give them a single direction, your direction. Confidence is also needed and, most especially, motivation. The card can, in fact, indicate new motivation or inspiration, which gets a stagnant situation moving again. It can also imply, on a more pragmatic level, a trip (usually by car), a vehicle - in the repair shop if the card comes up reversed - or a message.

The Chariot is a fascinating card, but also frustrating. It is armored, but also cut off - a charioteer fights alone. It moves from one plane to the next (water to land and back again) - conscious and unconscious, earthly and spiritual. It succeeds by attacking from the side, rather than straight on.

On the one hand, the Chariot may indicate loyalty, faith, and motivation; a conviction that will lead to victory no matter the odds. On the other hand, however, the Chariot may signify a ruthless, diehard desire to win at any cost. The Querent should be reminded to save his energy for what comes after.

If inverted, the meaning remains the same, but the Querent is in danger of losing the battle due to a lack of control.

The Chariot has many allusions to the kabbalistic Ma’asei Merkavah. According to Waite, the figures on the charioteer's shoulders are supposed to be the Urim and Thummim which were divinatory tools often used by the Israelites for guidance during times of war. Waite describes the charioteer as conquest on all planes — in the mind, in science, in progress, and thus able to reply to the riddles of the sphinx, even though he is not of priest and thus unable to answer to the High Priestess.

Structurally, the Chariot follows The Lovers. After the impulse that pulls us out of the Garden, we get on our chariot and depart. At that point, we are the Hero of our own story; maybe the Hero of everyone’s story. That Hero might represent Helios, the Greek god who drives the Sun’s chariot across the sky, bringing light to the earth. The danger of this card is well illustrated by the myth of Phaëton. Among other things, this story illustrates the danger of reaching too high, unprepared.

The Chariot is Key Seven of the Major Arcana, it represents the possibility of traveling through the mysteries of the universe. It also evokes the seven gates of hell that Inanna passed through, required to partially disrobe at each one before finally being presented to the Queen of the Underworld, her own sister, Ereshkigal.

Ra from Egyptian mythology piloted the boat of the sun across the sky and back to the gates of dawn down the Nile every night. One night, Apophis, Chaos and Old Night swallowed the river to keep the sun from rising. Fortunately, Ra’s usual enemy, Set, took it upon himself to save the day by slicing Apophis open, allowing Ra to escape. This story bespeaks the reversals of the night, where our deadly enemies may be our best friends.

Another famous chariot driver was the god Krishna who in the Bhagavad Gita drove Arjuna’s chariot and gave him illumination.

Some authorities say that he is the God of Spring, the Son of the Queen of Heaven. The canopy of his chariot is her starry gown; he wears the waxing and waning moon on his shoulders; the circle of the Zodiac is his belt. He channels energy from the world above (signified by the eight pointed star on his brow, eight here representing Venus) to the world below (signified by the square on his chest, the four corners of the Earth). The star can also represent the infinite, the square the earthly spheres of time and space.

He is fueled by contradictory impulses, represented by the black and white sphinxes that pull his chariot.

When this card appears, it evokes the Querent’s own path - calling, exile or random journey. The danger is getting on the wrong path - being overwhelmed and dying before our due time.

He may warn that we are in danger of being pulled to pieces by forces we do not control and do not understand.