Charing railway station serves Charing in Kent. The station, and all trains serving it, is operated by Southeastern. The station was opened on 1 July 1884,[1] as part of the London, Chatham and Dover Railway (LCDR) extension to Ashford of the 1874 line to Maidstone, which itself was a branch off the LCDR's Sevenoaks branch of 1862, which joined the LCDR mainline of 1840 at Swanley.[1] In the wake of 1955 British Rail Modernisation plan, the "Kent Coast Electrification" scheme saw the suburban electrification of the previous Southern Railway extended from Maidstone East through to Ashford.[2] Electrification also saw the addition of a footbridge, but by 16 May 1964 freight operations ceased.[2] Charing's signal box closed on 14 April 1984, when the upgraded Maidstone East Panel was took control of the whole line.[2]

The ticket office is manned only during part of the day; at other times a PERTIS 'permit to travel' machine, located outside the station building on the 'down' side, suffices.

The next station eastwards (towards Ashford) used to be Hothfield, however it was closed in 1959, although it remained a 'request' stop throughout the 1960s.[2] 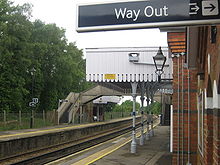 There is also a peak hour service via Thameslink across London, serving City Thameslink, Farringdon and St Pancras International before travelling onto Bedford.