The new flag of Iraq 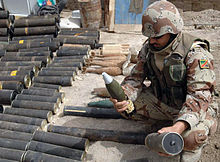 An Iraqi soldier from the 1st QRF division examines a mortar captured during clearing operations in Hayaniya, April 19 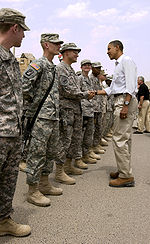 Senator Barack Obama shakes hands with a U.S. Soldier outside Multi-National Division South East Headquarters in Basra, during his visit in Iraq, 21 July 2008.

U.S. President George W. Bush ducking in a press conference as two shoes were thrown at him by the Iraqi TV journalist Muntadhar al-Zaidi.