Deal railway station serves Deal in Kent, England. The station and all trains serving it are operated by Southeastern. The station is on the Kent Coast Line 9½ miles (15⅓ km) north east of Dover Priory and 86¾ miles south east of London Charing Cross. 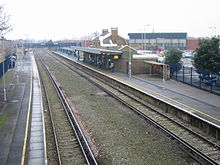 View north from London Road showing the gap between the tracks. 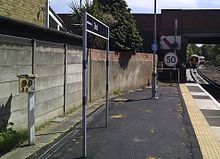 An Electrostar departs past the semaphore up starter signal with the 14:40 to Charing Cross on 23 May 2011

Deal was originally the terminus of a South Eastern Railway branch line from Minster Junction through Sandwich and opened on 1 July 1847. This meant the original services to London ran via Canterbury, Ashford, Tonbridge, Redhill and Croydon to London Bridge. Local sources say Charles Dickens attended the celebrations that accompanied the opening of the line.[1] The link south to Dover was delayed by commercial rivalry between the two Kent railway companies, the South Eastern Railway and the London, Chatham & Dover Railway. However, the companies finally agreed to build the line jointly and it opened on 15 June 1881.[2]

The original single platform with its 2-storey 1847 building became the new 'up' platform. This line now continued south under a new flyover carrying London Road and necessitated demolition of the middle houses in Sunnyside Terrace. The siding next to this was extended to become a through siding. Finally, a new 'down' platform was built to the west with buildings similar to those at Walmer. The existence of this middle siding explains the gap between the current tracks. The footbridge, which originally had a roof, also dates to 1881.[2][3][4]

Deal used to have extensive coal yards (bordered by St Patrick's Road), goods yards (now Sainsbury's) and a locomotive shed and turntable (now Bridgeside). The locomotive shed was shut in 1930. Albert Terrace was built in the 1860s for railway employees in a line with Lower Queen Street before the railway was extended to Dover. Hence the London Road flyover was built with a 'kink' around them. The station-master's house received a direct hit during World War 2 (although a garden wall still exists), as did the goods shed.[2][3] The substantial buildings on the 'down' platform were demolished about 1970 and replaced with small CLASP-style buildings.[2] These have since been replaced with a small modern shelter, as shown in the photograph on the right.

Deal retains its semaphore signals at the station and at Victoria Park. However as one of the last pockets of semaphore signalling in Kent, Network Rail has scheduled these to be replaced by colour light signals during its East Kent re-signalling scheme in 2012.

The signal box moved from the platform to the Western Road level crossing in 1939. It is a good example of a Southern Railway odeon/art deco ‘glasshouse’ signal box (a Type 13). One siding remains, occasionally used for infrastructure trains.[2]

During the 19th and early 20th centuries Deal enjoyed a higher status than now as a resort and, with extensive Royal Marine barracks, was a terminating/originating point for a number of trains travelling routes that seem unusual nowadays. Trains to/from London could run either north or south. For example, there were direct trains to Reading via Redhill, and a daily service to Birkenhead began in 1903 and continued for many years, surviving as a daily through train to Wolverhampton until 1962. There was also a daily train to Manchester before WW1 and regular daily trains to Victoria until the 1960s. From 1948-1962, the peak 16:56 service from Cannon Street that divided at Ashford was unusual in having both portions call at Deal. The portion via Dover called at Deal at 19:16, to Ramsgate. The portion via Canterbury called 3 minutes later, to Dover.[4][6][7]

Sadly, it was 16:56 service from Cannon Street that was involved in the fatal Lewisham crash of 4 December 1957 in which 90 people were killed, including at least one person from Deal.[8]

An earlier version of this service, the 17:00 Cannon Street to Deal via Minister, was also involved in a fatal crash when it derailed at Sevenoaks on 24 August 1927. 13 people were killed.[8]

The 1847 terminus was built across an ancient right of way between St Leonard’s and St George’s Churches (Upper and Lower Deal). When Connex South Eastern tried to gate the station in the 1990s to prevent vandalism and improve revenue collection, it emerged that this right of way still exists as a legal covenant and the company was unable to gate the station.[citation needed]

Services through Deal were electrified using the 3rd rail system at 750 volts DC as Phase 2 of British Rail’s Kent Coast Electrification Scheme. Some electric trains began running in 1961, with the full service beginning with the Summer timetable on 18 June 1962. There were 2 trains per hour (tph) off-peak, mostly from Charing Cross to Ramsgate, until May 1982, when the service was reduced to 1 tph off-peak (2 tph in the peaks).[2]

From 5 September 2011, three services daily to St Pancras station via Dover and High Speed 1 were introduced, taking approximately 80 minutes. There are two return services from St Pancras each evening.[10]

Deal and its station featured in an episode of the BBC TV Great British Railway Journeys, Series 2, that aired on BBC2 on 27 January 2011. Presenter Michael Portillo travelled from Ramsgate to Folkestone and spent the night at Deal's historic Royal Hotel. He explored local attractions including Walmer Castle and the Timeball Tower.[11]

Deal station has a ticket office and waiting room open: Monday to Friday 06:45 - 20:10 Saturday 05:45 - 19:10 Sunday 07:30 - 16:00. The station building incorporates toilets (including disabled access and baby-changing facilities), staff facilities, photo machine and snack machines. There is a help-point and automatic ticket machine on the platform.[12]

Due to former problems with cars clogging the vehicle access to the down platform, there is only pedestrian access to this platform. This means mobility-impaired passengers must either cross the footbridge or walk up the ramp to London Road. Many people choose to alight from down trains at Walmer as access from the down platform there to Sydney Road is easier.[citation needed]

In the early 1980s, the upstairs room used to house Deal & District Model Railway Society but has lain empty for many years despite efforts to rent it.[citation needed]