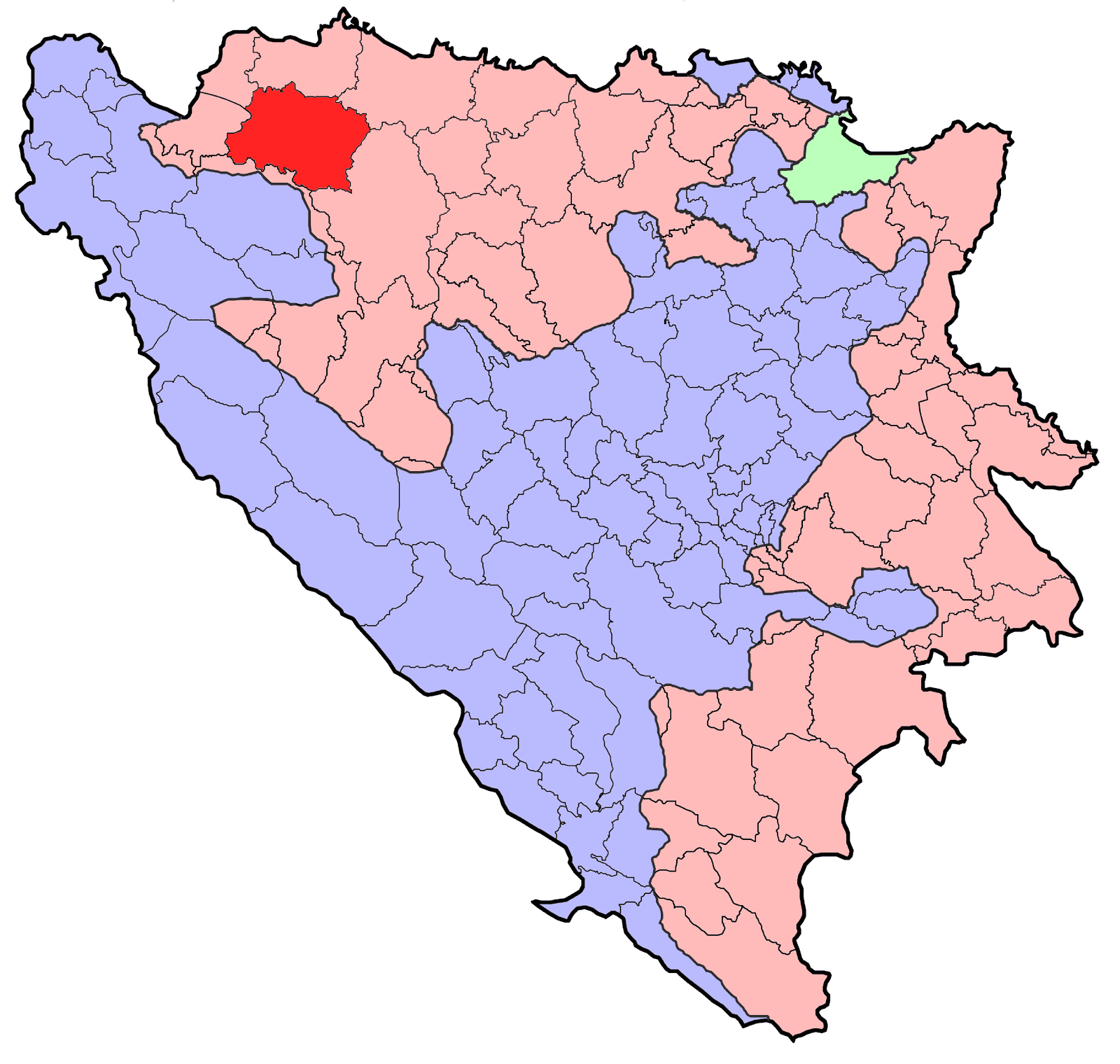 Prijedor (Serbian Cyrillic: Приједор) is a second largest town and municipality in RS .

Prijedor municipality sits in north-western part of Bosnia and Herzegovina, on the banks of the Sana river and Gomjenica and on hills of mountain. The area of the municipality is convert|833|km2|sqmi|0|abbr=on. The town lies on 44°N and 16°W from Greenwhich, at altitude of 135 m. convert|2|km|mi|0|abbr=on outside the town, to the northeast, the terrain ascends in waves and by degrees becomes a mountain range of , famous from the peoples' uprisings in the previous centuries and battles against fascism during . The level country in Prijedor lays is terrain created by the Sana river and its tributaries on the south western hillsides of the Kozara mountain. The structure of this level country depends upon the geologic composition of the ground through which run brooks and tributaries of the Sana river.

The town was developed on Svinjarica island separated from the Sana river and Berek. There are remains of the Roman and Illyrian civilizations in these regions.

Prijedor has been first mentioned in historical documents as a ground fortress, in letters of Count Adam Batschani during the so-called from 1683 till 1699. However, many things refer to the town's existence since ancient times and the ancient Roman presence in this region. In Ljubija were found many monuments from the Roman age as evidence of the iron production. In Zecovi there is n from the . A legend says that the river Sana had been named by the Romans. In the iron mine, used for production of weapons for the Roman legions, from Prijedor iron mine placers was melted in large smeltings&mdash;works of Salonica, Siscia and Sirmium.

Soon Prijedor has become a significant trade handcraft centre, thanks to the s, navigability of the and the first railway in which was built in 1873 during the time of Baron Hirsch. A century after, the town had burnt in a great fire which is why the Austro-Hungarian authorities had made the first in 1901.

Among important monuments there is a great monument on Mrakovica, the work of academic artist , another evidence of traditional freedom-loving of the people in this region.

During the , the area near Prijedor housed the infamous , , and established by Serb authorities for Bosniak and Croat population. Prijedor was also a place of mass [Marlise Simons, "5 Bosnian Serbs Guilty of War Crimes at Infamous Camp," "The New York Times", November 3, 2001.] [Marlise Simons, "3 Ex-Guards at Bosnia Camp Are Sentenced by Hague Panel," "The New York Times", November 14, 2001, p. A6.] and executions of , , s and non-cooperative s by the Bosnian Serb army. Bosnian Serb high-rank politician from Prijedor, , was found guilty by ICTY and was sentenced to 40 years for war crimes conducted by Serb authorities in Prijedor. [ [http://www.un.org/icty/stakic/appeal/judgement/index.htm Milomir Stakić judgement file] at ’ website]

According to the data from the 1910 Austro-Hungarian population census the Prijedor had a 59.08% Orthodox Serb majority.

According to data from the , the municipality of Prijedor had:

The population of non-Serbs has declined significantly since 1991, while the number of Serbs increased dramatically. This was caused by the of mostly Bosniaks and Croats by Bosnian Serb authorities, and by the influx of Serb refugees from other areas under Bosniak and Croat control.Fact|date=January 2008

The first forms of organized education can be tracked back in the first half of the 19th century. In 1834 Prijedor had the "Serbian elementary school" that later with so-called "Communal school" was transformed into "State school" in 1919. [ [http://www.opstinaprijedor.org/content.php?content_category=45 Oficijalna internet prezentacija Opštine Prijedor ] ]

Nowadays, there are 11 s with circa 8,000 students and 6 s attended by 4,000 students. A music school and a special school for mentally retarded persons are also part of the municipal educational system. Over the last several years, important steps were taken, aimed at establishing colleges. As a result, Prijedor now has a medical college, a business college, and a Mining Geology branch department of the .

The local football club, , plays in the .