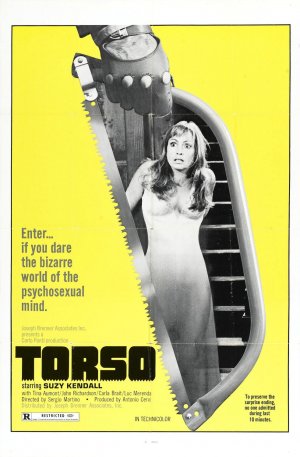 A series of sex murders shock a college campus, and four young beautiful girlfriends head for the safety of an isolated country villa. Soon a mysterious black-gloved killer begins to kill them one by one. While this film belongs in the Italian "giallo" genre, the third act is considered to be one of the kick starts of the mostly American "slasher" genre.

Sleazy sex and stylish violence are two of the main ingredients of the Italian giallo thriller. And though few genre aficionados consider Torso to be one of the better giallo offerings, it does nevertheless exemplify many of the genre's strengths and weaknesses. Anchor Bay Entertainment's disc has been beautifully transferred and restored from the film's original negative. Picture quality is strong, sharp, and clear throughout, allowing the viewer to revel in how technically polished and accomplished this film really is. Color and flesh tones are accurate and stable and there is hardly a trace of grain in the picture, especially during the nighttime scenes. The film's Dolby Digital Mono soundtrack is fine and is available in English or Italian. There is no Italian-language option with English subtitles. Portions of the film, though, are in Italian with subtitles. These scenes — which were taken from the Italian version — were never recorded in English. Two trailers have also been included on the disc — the U.S. and the international. Both are appropriately hysterical and sleazy.