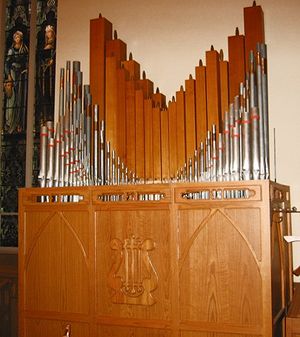 The choir division of the organ at St. Raphael's Cathedral, Dubuque, Iowa. Wood and metal pipes of a variety of sizes are shown in this photograph.

An organ pipe is a sound-producing element of the pipe organ that resonates at a specific pitch when pressurized air (commonly referred to as wind) is driven through it. Each pipe is tuned to a specific note of the musical scale. A set of organ pipes of similar timbre tuned to a scale is known as a rank or a stop.

Organ pipes are generally made out of either metal or wood. Very rarely, glass, porcelain, plastic, paper, Papier-mâché, or even stone pipes may be seen. A historical organ in the Philippines has pipes made exclusively of bamboo.

Metal pipes are usually made of an alloy of lead and tin, along with trace amounts of antimony and copper for increased rigidity. The percentage of each metal in the alloy depends on the desired characteristics of the resulting pipe. The more lead used in the alloy, the darker the resulting tone will be. Conversely, if a pipe has a high proportion of tin, it will have a brighter tone. In addition, high amounts of tin give a gleaming and long-lasting polish, which may be desired if the pipe is clearly visible. The cost of each metal is also a factor, as tin is more expensive than lead. The usual exceptions to tin-lead alloys are very lowest pipes in a rank, which are sometimes made of rolled zinc. In addition, pipes have been made of many metals, including copper, aluminium, gold electroplate, silver, brass, and iron.

Metal pipes are made by first casting a metal alloy of the desired metallurgical composition onto a long flat surface. Once the metal cools, it is cut into pieces, which are then rolled into shapes around molds called mandrels and soldered together. Thus, the cross-section of a metal pipe is usually circular.

The body of a wooden pipe can be made of either a coniferous wood or hardwood, although the lower section of the pipe (comprising the foot, cap, block and mouth) will nearly always be made from hardwood to provide a precise edge for the pipe's mouth. Using screws and glue, the pipes are assembled from wooden pieces of various shapes and sizes. In contrast with the circular cross-section of a metal pipe, the cross-section of a wooden pipe is most commonly square or rectangular. 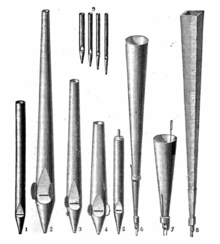 The bodies of organ pipes are generally made in three shapes: cylindrical, conical, or rectangular. Cylindrical pipes are simple cylinders, while conical pipes are in the shape of a tapering or expanding cone. Rectangular pipes form cuboid shapes with either a square or rectangular cross-section when viewed from above. There are some irregular shapes as well: the Flûte triangulaire, for example, has a triangular cross-section when viewed from above). In addition, a cylindrical or rectangular pipe can be tapered: that is, it can be made to be wider at the bottom than at the top. The internal shape of the pipe is a major factor in tone color.

The end of the pipe opposite the reed or mouth may be either open or closed (also known as stopped). A closed flue pipe with a uniform cross-section sounds an octave lower than a similar open pipe of the same length. Also, such an open pipe produces a tone in which both the even-numbered and the odd-numbered partials are present, while a stopped pipe, such as a gedackt, produces a tone with odd-numbered partials. The tone of a stopped pipe tends to be gentler and sweeter than that of an open pipe, though this is largely at the discretion of the voicer.

For more about the pitch of organ stops, see Organ stop: Pitch and length.

The pitch produced by an organ pipe is a function of its length, the wavelength of the sound produced by an open pipe being approximately twice its length. A pipe half the length of another will sound one octave higher. If the longest pipe, C, is 8 feet (2.4 m) in length, the pipe one octave higher will be 4 feet (1.2 m) long, and two octaves above (middle C) will be 2 feet (0.61 m) long. A closed (stopped) pipe produces a sound one octave lower than an open pipe. For example, the lowest Gedackt / closed C pipe (2 octaves below middle C) will be 4 feet (1.2 m) long. 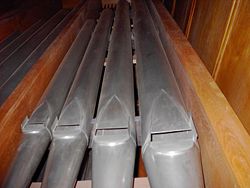 A set of flue pipes of a diapason rank in the Schuke organ in Sofia, Bulgaria.

The sound of a flue pipe is produced with no moving parts, solely from the vibration of air, in the same manner as a recorder or a whistle. Wind from the "flue", or windway is driven over an open window and against a sharp lip called a Labium. By Bernoulli's principle this produces a lower pressure region just below the window . When the vacuum under the window is large enough, the airstream is pulled under the Labium lip. Then the process works in reverse, with a low pressure region forming over the Labium which pulls the airstream to the other side again. This 'fluttering' airflow creates high and low pressure waves within the pipe's air column. A high and a low pressure wave form a single "cycle" of the pipe's tone. (See Wind Instrument.)

Flue pipes generally belong to one of three tonal families: flutes, diapasons (or principals), and strings. The basic "foundation" (from the French term fonds) sound of an organ is composed of varying combinations of these three tonal groups, depending upon the particular organ and the literature being played.

The different sounds of these tonal families of pipes arise from their individual construction. The tone of a flue pipe is affected by the size and shape of the pipes as well as the material out of which it is made. A pipe with a wide diameter will tend to produce a flute tone, a pipe with a medium diameter a diapason tone, and a pipe with a narrow diameter a string tone. A large diameter pipe will favor the fundamental tone and restrict high frequency harmonics, while a narrower diameter favors the high harmonics and suppresses the fundamental. The science of measuring and deciding upon pipe diameters is referred to as pipe scaling, and the resulting measurements are referred to as the scale of the pipe. Ranks of all three tonal families can be either open or stopped, although flutes are by far the most common of the three to be stopped.

A rank of Vox Humana (reed) pipes, with part of the reed section of the organ shown in the background.

The sound of a reed pipe is produced by a beating reed: wind is directed towards a curved piece of brass (the reed). A partial vacuum is created by higher velocity air flowing under the Reed which causes it to be pulled closed against a hard surface called the shallot. This shuts off the vacuum and allows the Reed to spring open again. A tuned resonator extends above this assembly and reinforces the sound produced. The principle is the same as that of the orchestral clarinet. The pitch of a reed pipe is determined primarily by the length of the reed but the cubic volume of air in the resonator supports that frequency. Most Reed pipes have a slide to adjust the vibrating length of the Reed to fine tune it. Because of the precision required in the making of the vibrating reed,resonator pipe and its accompanying parts, reed pipes are more complicated to manufacture than flue pipes.

By altering any of several parameters (including the shape and cubic volume of the resonator, as well as the thickness and shape of the reed), a reed pipe can produce a wide variety of tonal colors. This allows reed stops to imitate historical musical instruments, such as the krumhorn or the regal. Because the resonator is partially stopped/closed by the Reed, odd-numbered partials/harmonics are dominant (in the hollow tones of Krumhorn and Clarinet stops, for example). If the resonator pipe expands outward to conical, the geometry allows the production of both even- and odd-numbered partials, resulting in the fuller tones of Trumpet and Oboe stops.

These are quite uncommon among others. See Reed pipe

The diaphone is a unique and uncommon organ pipe. Invented by Robert Hope-Jones around 1900, it has characteristics of both flue pipes and reed pipes. The pipe speaks through a resonator, much like a reed pipe, but a spring-loaded pallet instigates the vibration instead of a reed. Possessing a powerful bass groundtone, the pipe is generally made of wood and can be voiced at various wind pressures. The diaphone is usually found at 16′ and 32′ pitches, however there are a few examples of 8′ diaphones. There are two 32' Diaphones in Philadelphia's Wanamaker Organ, and a full-length 64′ Diaphone-Dulzian is installed in the Boardwalk Hall Auditorium Organ in Atlantic City.

Hope-Jones also developed an imitative version of the diaphone called the diaphonic horn, which had a more reed-like quality than the diaphone and was voiced on lower wind pressures. Wurlitzer built a version of the diaphonic horn for their theater organs at 32′ and 16′ pitches with huge wooden resonators as extensions of its Diaphonic diapason, and at 16′ with metal resonators as an extension of its smaller-scale Open diapason. The Austin Organ Company also developed a metal diaphone at 16′ pitch known as a Magnaton. Due to its penetrating tone, the diaphone has also been used in foghorns and fire signals.