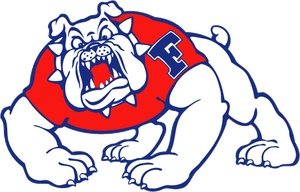 logo_width = 130
university = California State University, Fresno
conference = WAC | division =
director =
city = Fresno
state = California
stateabb = CA
teams = 16
stadium =
baseballfield =
arena = Save Mart Center
mascot =
nickname = Bulldogs
fightsong =
color1 = Cardinal
color2 = Blue
hex1 = 9a122c
hex2 = 0000ff
pageurl = http://www.gobulldogs.com/
pagename = www.gobulldogs.comThe Fresno State Bulldogs represent (commonly referred to as Fresno State) in 16 sports. The teams have been members of the since 1992. Before that, it had been a member of the since (the conference was known as the until ). Fresno State was also a member of the from its beginning in (when Fresno State was in ).

Fresno State's football team is currently coached by . Since joining the WAC in 1992, it has shared three WAC titles; in 1992 and 1993 under Head Coach Jim Sweeney, and in 1999 with the University of Hawaiokinai, Hill's only title. However, Hill has garnered a reputation for being willing to play any top-ranked opponent, anytime, anywhere (usually on the opponent's field). Fresno State (as of December 2005) has achieved success with a 10-8 record against BCS teams, the most by any program not in a BCS conference. This has provided the Bulldogs a following among college football fans who admire its willingness to challenge the best teams (and has resulted in the Bulldogs being featured more regularly on college football TV programs than most non-BCS conference teams). However, their success in their non-conference games hasn't translated to championships in conference play. The Bulldogs haven't won the WAC title since sharing it in 1999. Fresno State often travels between 10,000-20,000 miles (30,000 km) during its football season, between its WAC conference games (the conference itself is spread from Ruston, Louisiana to Honolulu, Hawaiokinai) and its usually brutal non-conference schedule. Boise State and Hawaiokinai are two of Fresno State's major in-conference rivals.

Bulldog basketball squads play at the crown jewel of the WAC, the Save Mart Center. This facility houses the ECHL's hockey team and is regularly on the list of top 25 concert and entertainment venues by attendance.

The Fresno State baseball team is currently coached by and has made 4 trips to the in its history, most recently to the . On , 2008, the Fresno State Bulldogs defeated the Georgia Bulldogs to win the 2008 College World Series.

The perennial national power Bulldog women's softball team has had a lengthy tradition of winning since the inception of the sport. The softball team owns the distinction of winning the school's first team NCAA National Championship in 1998. Fresno State defeated then-top ranked Arizona 1-0 in the 1998 NCAA championship game in Oklahoma City thanks to the strong arm of All-American pitcher Amanda Scott and the bat of All-American Nina Lindenberg, who scored the game's only run on a solo home run. The Bulldogs finished the season with a 52-11 record and ranked No. 1 in the nation. Arizona entered the 1998 national championship game against Fresno State with a 67-3 overall record.

Through the 2008 season, Fresno State continues to be the nation's only softball team to have earned bids to all 27 NCAA Division I championship tournaments. In addition to Fresno State's 1998 NCAA championship, the Bulldogs have reached the NCAA championship game four other times (1984, 1988, 1989, 1990), and the College World Series 12 times. The Bulldogs are coached by Margie Wright, the nation's winningest Division I coach in the sport. Wright, who has led Fresno State to nine Western Athletic Conference championships in the last 11 years and 17 league crowns overall, enters her 24th season as head coach of the Lady Bulldogs in 2009. She enters the 2009 season having won 1,307 games in her career.

*Official colors are Cardinal and Navy blue
*The of Fresno State is a named Timeout.
*The green "V" worn on the back of the football players' helmets stands for San Joaquin Valley pride. The green in the "V" is a symbol to the agricultural community of the Central Valley, which is the world's richest agricultural area in export dollars. This was instituted in 1997, when Pat Hill took over as head coach. He was upset with the lack of pride shown by students and athletes in what should be a very proud community.
*In , Fresno State brought back the official live Bulldog of the team. , a 2-year old Bulldog, was introduced during the football home opener versus Nevada on September 1, 2006.

"Let us in song, our voices raise"In cloistered courts, to sound thy praise.""Each voice and heart that sings is true""To thee, oh, Cardinal and Blue.""For thee, our hopes and memories;""For thee, our hearts and loyalties.""Thy sons and daughters hail thee great,""Our Alma Mater, Fresno State!"