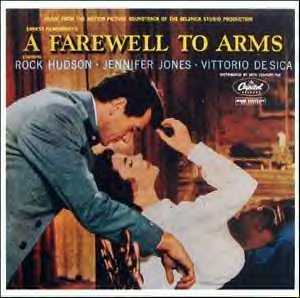 "A Farewell to Arms" is a 1957 American directed by . The by , based in part on a 1930 play by , was the second adaptation of 's 1929 semi-autobiographical novel of the same name. It was the last film produced by .

Frederick Henry is an American serving as an driver for the during . While recovering from a wound in a British base in northern , he meets Catherine Barkley, a nurse, and the two engage in an affair resulting in her . The couple are separated before the birth of their child, and Catherine comes to believe Frederick has abandoned her. Following the , in which his close friend Alessandro Rinaldi dies, he makes his way to , where Catherine is hospitalized. Their child is stillborn, and Catherine dies shortly afterward.

For many years David O. Selznick had wanted to film the Hemingway novel, but owned the property and refused to sell it to him. He found himself in an advantageous bargaining position when Warners bought the remake rights to "A Star is Born", to which he owned the foreign rights. Without them, the studio could not release their intended remake with overseas. Selznick offered to relinquish his rights to "Star" in exchange for the rights to "Farewell", and Warners agreed ["Memo from David O. Selznick", selected and edited by Rudy Behlmer, The Viking Press, 1972, pg. 441] .

The film was shot on location in the Italian Alps, in the in the region of , , and .

In his review in the "", noted, "Mr. Selznick's picture . . . lacks that all-imporant awareness of the inescapable presence and pressure of war. That key support to the structure of the theme has been largely removed by Ben Hecht's script and by a clear elimination of subtle thematic overtones . . . [it] is a tedious account of a love affair between two persons who are strangely insistent upon keeping it informal . . . as a pure romance . . . it has shortcomings. The essential excitement of a violent love is strangely missing in the studied performances that Rock Hudson and Jennifer Jones give in the leading roles. Mr. Hudson is most noticeably unbending, as if he were cautious and shy, but Miss Jones plays the famous Catherine Barkley with bewildering nervous moves and grimaces. The show of devotion between two people is intensely acted, not realized. It is questionable, indeed, whether Mr. Hudson and Miss Jones have the right personalities for these roles." [ [http://movies.nytimes.com/movie/review?res=9B06E4DA1239EF3BBC4D51DFB7668383649EDE "New York Times" review] ]

"" calls it "an overblown Hollywood extravaganza that . . . hasn't improved with age . . . the chief virtue of this hollow epic is the stupendous color photography of the Italian Alps . . . also enjoyable is Vittorio De Sica's inspired performance as the wily Maj. Rinaldi, but it's not enough to offset the flagrant overacting by Jones and the woodenness of Hudson." [ [http://www.tvguide.com/movies/farewell-arms/review/114370 "TV Guide" review] ]

"" describes it as an "inflated remake" with "surplus production values and spectacle" and adds, "A padded Ben Hecht script and Selznick's invariable tendency to overkill are equally to blame." [ [http://www.timeout.com/film/newyork/reviews/66440/A_Farewell_to_Arms.html "Time Out New York" review] ]

In his review of the release, Jeremiah Kipp of "" awarded the film two out of a possible five stars and stated, "To those willing to endure "A Farewell To Arms": Don't be a hero! . . . We have David O. Selznick to blame for this bloated two-hour-plus remake, announcing from the larger-than-life opening credits set against epic shots of sunsets, mountains, and valleys that he's aiming for another "Gone with the Wind" . . . without compelling lovers at the heart of his grand-scale love story, it's all just a meaningless protracted spectacle." [ [http://www.slantmagazine.com/dvd/dvd_review.asp?ID=641 "Slant Magazine" review] ]

Vittorio De Sica was nominated for the but lost to for "".