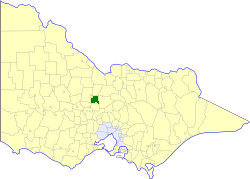 The Shire of Strathfieldsaye was a Local Government Area located immediately to the east and southeast of the regional city of Bendigo, Victoria, , and included the eastern suburbs of Bendigo's metropolitan area. The shire covered an area of convert|601.34|km2|sqmi|1, and existed from 1861 until 1994.

Strathfieldsaye was first incorporated as a district on 20 August 1861, and became a shire on 17 September 1866.

On 7 April 1994, the Shire was abolished—one of the first to disappear under the Kennett Liberal government's statewide local government restructuring program—and merged with the , the , the and the to form the . [cite web|url=http://www.mav.asn.au/guide.nsf/Council/Greater+Bendigo+City+Council?OpenDocument|title=Greater Bendigo City Council|author=Municipal Association of Victoria|year=2006|accessdate=2008-01-08 Date cross-checked with the Records Division, Greater Bendigo City Council.] [cite news|title=Marong to fall in line on super council|last=Taylor|first=Thomas|page=6|date=6 April 1994|work= Accessed via Factiva online.]