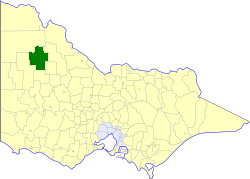 The Shire of Karkarooc was a Local Government Area located in northwestern Victoria, . The shire covered an area of convert|3719|km2|sqmi|1, and existed from 1896 until 1995.

Land in Karkarooc was originally governed by the Shire of St Arnaud from 1861 onwards, and then by the Borung after its severance from St Arnaud. Parts of the North and West Ridings of Borung severed to form the Shire of Karkarooc on 29 May 1896. On 29 May 1897 it annexed the northeastern part of , and two days later annexed part of Castle Donnington. On 31 May 1906 it also annexed part of the Tyrrell Riding of the .

A new shire, Walpeup, was formed in western Victoria on 1 October 1911, taking in some areas of Karkarooc and sections of five other shires. Karkarooc also lost some of its West Riding to Dimboola on 14 December 1932.

Karkarooc was, at the time of dissolution, not divided into ridings, and its twelve councillors represented the entire Shire.