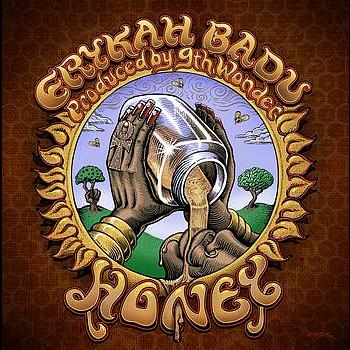 The was directed by Badu and Chris Robinson (credited under the alias "Mr. Roboto"). The song is interrupted by a video-in-a-video, as an excerpt of "Annie", recorded by Badu's super-group side project Edith Funker, plays on the store's video screen. The video is set in a record store, from the perspective of a customer browsing the racks. The various records shown are parodies of popular records which feature altered titles and Badu portraying the artist instead. The album sleeves shown are:

In the video, Badu also spoofs ex-boyfriend in 's 2004 video "", changing the green setting for a pink one. There is also a parody of the cover of the , issue of "" magazine featuring and , entitled "Riding My Hip".

The video for "Honey" won Best Direction at the , and was nominated for Best Special Effects, Best Editing, and Best Cinematography.