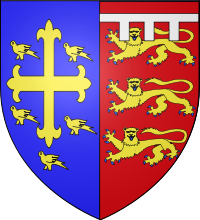 /ˈmoʊbri/) is an Anglo-Norman baronial house, derived from Montbrai in Normandy. From this village came Geoffrey de Montbrai who came to be Bishop of Coutances and accompanied Duke William of Normandy at the Conquest of England in 1066.

For his support he was granted some 280 English manors (each about the size of a village). His nephew Robert de Montbrai became Earl of Northumberland in 1080, but he rebelled against William II (Rufus) and was captured and imprisoned in Windsor Castle for thirty years. His divorced wife, Matilda, married Nigel d'Aubigny (sometimes spelt d'Albini) whose family came from Saint Martin d'Aubigny, 16 km. west of Saint-Lô and 15 km. north of Coutances. However, Robert was the maternal uncle of Nigel and although Nigel inherited Robert's vast landholdings, the marriage was annulled for consanguinity before any issue. By his second wife, Gundred, he had a son and heir Roger whose name was changed by royal command from d'Aubigny to de Montbray. The family flourished (Baronial Pedigree) and the name spelling evolved to Mowbray.

The baronial line died out in England with a young heiress ca. 1475, although a son of an earlier generation had founded a dynasty in Scotland where issue has survived. The family was active up and down the east side of the country and settled predominantly in the counties of Durham, Lincolnshire and Leicestershire in historic times. Since then there has been the usual migration into other areas and overseas.

As with any name, there are numerous spelling variations over time, but the major ones are MOUBRAY, the Scottish version, and MOWBERRY which stemmed from a Leicestershire migration into Glinton, Northamptonshire, where the variant became established and eventually spread into a Lincolnshire branch. One of the many heraldic badges of the house was a mulberry tree.

The baronial house was founded at the Conquest by Geoffrey de Montbray, bishop of Coutances. His brother's son Robert de Montbray, who rebelled with him against William Rufus on the Conqueror's death, was made, after their reconciliation, earl of Northumbria, as his uncle's heir but was forfeited and imprisoned for life on rebelling again in 1095.

Roger d'Aubigny (of Aubigny in the Cotentin) had two sons, Nigel and William, who were ardent supporters of Henry I. They were rewarded by him with great estates in England. William was made king's butler, and was father of William d'Aubigny (de Albini), first earl of Arundel; Nigel was rewarded with the escheated fief of Robert de Montbray in Normandy and a number of lands in England. Nigel married, by dispensation, the wife of Robert de Montbray, the imprisoned earl, but afterwards divorced her, and by another wife was father of a son Roger, who took the name of Mowbray.

Roger, a great lord with a hundred knight's fees, was captured with King Stephen at the battle of Lincoln, joined the rebellion against Henry II (1173), founded abbeys, and went on crusade. His grandson William, a leader in the rising against King John, was one of the 25 barons of the Great Charter, as was his brother Roger, and was captured fighting against Henry III at the rout of Lincoln (1217). William's grandson Roger (1266–1298), who was summoned to parliament by Edward I, was father of John (1286–1322), a warrior and warden of the Scottish March, who, joining in Thomas of Lancaster's revolt, was captured at Boroughbridge and hanged.

His wife, a Braose heiress, added Gower in South Wales and the Bramber lordship in Sussex to the great possessions of his house. Their son John de Mowbray, 3rd Baron Mowbray (d. 1361) was father, by Joan of Lancaster, a daughter of Henry, 3rd Earl of Lancaster, of John, Lord Mowbray (c. 1328–1368), whose fortunate alliance with the heiress of John de Segrave, 4th Baron Segrave, by the heiress of Edward I's son Thomas, earl of Norfolk and marshal of England, crowned the fortunes of his race. In addition to a vast accession to their lands, the earldom of Nottingham and the marshalship of England were bestowed on them by Richard II, and the dukedom of Norfolk followed.

The 1st duke left two sons, of whom Thomas the elder was only recognized as earl marshal. Beheaded for joining in Scrope's conspiracy against Henry IV (1405), he was succeeded by his brother John, who was restored to the dukedom of Norfolk in 1424. His son John, the third duke, was father of John, 4th and last duke, who was created earl of Warrenne and Surrey in his father's lifetime (1451). At his death (14l8) his vast inheritance devolved on his only child Anne, who was married as an infant to Edward IV's younger son Richard (created duke of Norfolk and earl of Nottingham and Warrenne), but died in 1481.

The next heirs of the Mowbrays were then the Howards and the Berkeleys, representing the two daughters of the first duke. Between them were divided the estates of the house, the Mowbray dukedom of Norfolk and earldom of Surrey being also revived for the Howards (1483), and the earldom of Nottingham (1483) and earl marshalship (1485) for the Berkeleys. Both families assumed the baronies of Mowbray and Segrave, but Henry Howard was summoned in his father's lifetime (1640) as Lord Mowbray, which was deemed a recognition of the Howards' right; their co-heirs, from 1777, were the Lords Stourton and the Lords Petre, and in 1878 Lord Stourton was summoned as Lord Mowbray and Segrave. The former dignity is claimed as the premier barony, though De Ros ranks before it. Lord Stourton's son claimed, but unsuccessfully, in 1901–1906 the earldom of Norfolk (1312), also through the Mowbrays. Of the Mowbray estates the castle and lordship of Bramber is still vested in the dukes of Norfolk.