It was the last bona fide hit before the Disney slump of the early 2000s grossing $171,091,819 domestically and $448,191,819 worldwide, outgrossing its predecessors Hercules (1997) and Mulan (1998). To date, it is the last film based on the character Tarzan to have had a theatrical release, and also held the record for being the most expensive Disney animated film, with a budget of $150 million, until it was broken by Tangled in 2010, with $260 million. It was also the first Disney animated feature to open at #1 since Pocahontas. This was the last major box office success of the Disney Renaissance.

In the 19th Century, an English couple and their infant son escape a burning ship, ending up on land near uncharted rainforests off the coast of Africa. The couple craft themselves a treehouse from their ship's wreckage, but are subsequently killed by Sabor, a rogue leopardess. Kala (Glenn Close), a gorilla whose own son was killed and eaten by the vicious leopardess, hears the cries of the orphaned infant, and finds him in the ruined treehouse where the parents' dead bodies lie in a dark corner. Kala takes an instant liking to the baby. Kala is attacked by Sabor, who wants to kill and eat the baby, but Kala manages to get her tangled in the ropes holding the derelict rowboat, and she and the baby escape.

The kindly Kala takes the baby back to the gorilla troop to raise as her own, despite her mate Kerchak's (Lance Henriksen) disapproval. Kala raises the human child, naming him Tarzan (Alex D. Linz as a young boy, Tony Goldwyn as a young adult). Though he befriends other gorillas in the troop and other animals, including the young female gorilla Terk (Rosie O'Donnell) and the paranoid male elephant Tantor (Wayne Knight), Tarzan finds himself unable to keep up with them, and takes great efforts to improve himself. As a young man, Tarzan is able to kill Sabor with his crude spear and protect the troop, earning Kerchak's reluctant respect.

The gorilla troop's peaceful life is interrupted by the arrival of a team of human explorers from England, consisting of Professor Porter (Nigel Hawthorne), his daughter Jane (Minnie Driver) and their hunter-guide Clayton (Brian Blessed). Jane is accidentally separated from the group and chased by a pack of baboons. Tarzan saves her from the baboons, and recognizes that she is the same as he is, a human. Jane leads Tarzan back to the explorers' camp, where both Porter and Clayton take great interest in him—the former in terms of scientific progress while the latter hoping to have Tarzan lead him to the gorillas so that he can capture them and return with them to England. Despite Kerchak's warnings to be wary of the humans, Tarzan continues to return to the camp and be taught by Porter, Clayton, and Jane to speak English and learn of the human world, and he and Jane begin to fall in love. However, they are having a hard time convincing Tarzan to lead him to the gorillas, due to Tarzan's fear for their safety from the threat of Kerchak.

When the explorers' boat returns to pick them up, Clayton persuades Tarzan that if he shows the group the gorillas, then Jane will stay with him. Tarzan agrees and leads the party to the gorilla troop's home, while Terk and Tantor lure Kerchak away to avoid having him attack the humans. Porter and Jane are excited to meet and mingle with the gorillas, but Kerchak returns and threatens to kill them after witnessing Clayton threatening some gorillas with his rifle. Kerchak heads directly towards Clayton but Tarzan is forced to hold Kerchak at bay while the humans escape, and then leaves the troop himself, alienated by his actions. Kala reluctantly takes Tarzan back to the treehouse where she found him as a baby, and shows him his true past.

Encouraged by Kala to follow his heart, Tarzan decides to leave with Jane, Clayton, and Professor Porter after saying a tearful goodbye to his adopted mother. When they return to the ship, they are all ambushed by pirates and it is then revealed that Clayton desires to capture and sell the gorillas in England for a fine price. Tarzan and the others are then locked up in the hull of the ship, but are rescued by Terk and Tantor and race back to the gorilla home.

Clayton and his men arrive back in the jungle and capture the gorillas. Making their way back to the gorillas' home, Tarzan recruits some miscellaneous animal friends (baboons, rhinos etc.), and together they fight and/or scare away the rest of Clayton's men, imprisoning them in the very same cages they planned to imprison the gorillas in. As the rest of the gorillas (including Kala) are freed by Jane, Professor Porter, Terk and Tantor, Kerchak and Tarzan together battle Clayton. Kerchak is fatally shot while Tarzan continues the fight into the vine-covered trees and destroys Clayton's gun. The fight ends when Clayton accidentally cuts a vine surrounding his neck, causing him to fall and get killed when the vine snaps his neck, leaving him hanged. Tarzan goes to Kerchak's side and asks Kerchak for his forgiveness, but Kerchak instead asks for Tarzan's for never accepting him as one of the herd and names him the new leader of the pack and calls Tarzan his son for the first time ever as he dies.

The next day, as Porter and Jane prepare to leave on a row boat, Tarzan reveals that he now plans to stay with the gorilla troop to continue his position as their new leader. As the ship leaves shore, Porter encourages his daughter to stay with the man she loves, and Jane jumps overboard to return to shore. Porter shortly follows her, telling the captain to tell the British that the crew never found them. The Porters reunite with Tarzan and his family and prepare for a new life together.

To create the sweeping 3D backgrounds, Tarzan's production team developed a 3D painting and rendering technique known as Deep Canvas (a term coined by artist/engineer Eric Daniels).[1] This technique allows artists to produce CGI background that looks like a traditional painting, according to art director Daniel St. Pierre.[1] (The software keeps track of brushstrokes applied in 3D space.)[1] For this advancement, the Academy of Motion Picture Arts and Sciences awarded the creators of Deep Canvas a Technical Achievement Award in 2003.

After Tarzan, Deep Canvas was used for a number of sequences in Atlantis: The Lost Empire, particularly large panoramic shots of the island and several action sequences. Expanded to support moving objects as part of the background, Deep Canvas was utilized to create about 75% of the environments in Disney's next major animated action film, Treasure Planet, though the results were less stunning, due to the film's tighter painting style which could have been accomplished without such advanced software. Deep Canvas was designed to accomplish a very loose, brushstroke-based style without hard edges, but Treasure Planet's backgrounds were more hard-edged and clean.

Various action figures and plush toys were produced, including a talking Terk and Tantor produced by Gund.[2]

The songs for the film were written and performed by singer Phil Collins.

"Trashin' the Camp" and "You'll Be in My Heart" are the only songs in the feature to be sung by the characters; all the other songs are background music.

Ty Burr of Entertainment Weekly gave the soundtrack a B-, stating that it was awkwardly split between Collins's songs and the traditional score, was burdened by too many alternate versions of the tracks, and in some instances bore similarities to The Lion King and Star Wars.[3]

The standard VHS and DVD release of Tarzan was on February 1, 2000. Disney also released a 2-Disc Collector's Edition on April 18, 2000 with behind-the-scenes, music videos, games, and more. Those 2 editions were eventually put in the Disney Vault. On October 15, 2005, Disney released a single-disc special edition.

Reviews for the film were very positive. It currently holds a score of 88% on Rotten Tomatoes.[4] Entertainment Weekly compared the film's advancement in visual effects to that of The Matrix (stating that the backgrounds are "themselves animated – yet still look as if they were painted with feathery brushstrokes"), and that the film far surpasses previous live-action attempts, in some cases on an emotional level.[5]

Tarzan was also nominated for 11 Annie Awards, winning one.

A spin-off television animated series named The Legend of Tarzan ran from 2001 to 2003. The series picks up where the film left off, with Tarzan adjusting to his new role as leader of the apes following Kerchak's death, and Jane (whom he has since married) adjusting to life in the jungle.

A Broadway musical, also titled Tarzan, produced by Disney Theatrical began previews on March 24, 2006 which had an official opening night on May 10 of the same year. After performing for a year on Broadway, the show closed on July 8, 2007. 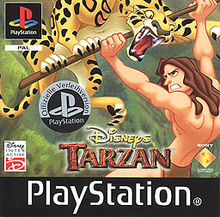 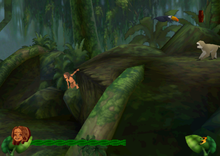 A screenshot of the PC version of Disney's Tarzan.

There are some video games loosely based on the film:

Disney's Tarzan (also known as Tarzan Action Game) is an action, platformer developed by Eurocom and published by Sony Computer Entertainment for the PlayStation console in 1999. Konami published the game for its Japanese release. It was also released on the PC, Nintendo 64, and Game Boy Color. The player takes control of the eponymous Tarzan who ultimately has to save his home, the jungle, from Clayton, a hunter for gorillas. Tarzan starts up as a child learning the skills of the apes. The game has 3 difficulties: easy, medium and hard. In the easy and medium difficulties, little Tarzan gets tips from his friend Turk. Tarzan's enemies are monkeys, baboons, eagles, and different animals, including some humans and Clayton.

Disney's Tarzan: Untamed (known as Disney's Tarzan: FreeRide in Europe) is a 2001 action-adventure video game released by Ubisoft Montreal for the PlayStation 2 and was a launch title for the GameCube. Picking up quite a while after the defeat of Clayton, Jane and Professor Porter now speak Gorilla-language fluently and Jane is married to Tarzan. However, their lives are threatened once again by a brutal band of British explorers led by the unscrupulous Oswald Gardner, who becomes fascinated with Tarzan and strives to capture the ape-man and take him back to England as a media attraction.

Tarzan's home, "Deep Jungle", is a playable world in the Disney/Square Enix video game Kingdom Hearts released for PlayStation 2 in 2002. It does not appear in any subsequent games in the series, due to Square Enix's failure to acquire the required rights from the family of Edgar Rice Burroughs.[citation needed]

Tarzan, Jane, Tantor, and Terk, in their young forms, appear as playable characters in Disney's Extreme Skate Adventure, developed by Toys for Bob and released for PlayStation 2, Gamecube, Xbox and Game Boy Advance in 2003.