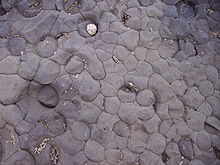 Mudstone (also called mudrock) is a fine grained sedimentary rock whose original constituents were clays or muds. Grain size is up to 0.0625 mm (0.0025 in) with individual grains too small to be distinguished without a microscope. With increased pressure over time the platey clay minerals may become aligned, with the appearance of fissility or parallel layering. This finely bedded material that splits readily into thin layers is called shale, as distinct from mudstone. The lack of fissility or layering in mudstone may be due either to original texture or to the disruption of layering by burrowing organisms in the sediment prior to lithification. Mud rocks, such as mudstone and shale comprise some 65% of all sedimentary rocks. Mudstone looks like hardened clay and, depending upon circumstances under which it was formed, it may show cracks or fissures, like a sun-baked clay deposit.[1]

They can be separated into these categories: