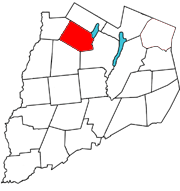 Exeter is a town in Otsego County, , . The population was 954 at the 2000 census. It is named after the county town in England.

The Town of Exeter is located in the norther part of the county.

The name Exeter derives from the town of in , .

John Tunnicliff purchased convert|12000|acre|km2 of a patent that included the town from David Schuyler and others in 1756, but had to abandon attempts to settle the town until after the .

The first settlements were made around 1769 near Angel Hill. The town was formed from the Town of Richfield in 1799.

The east town line borders, in part, . flows down the west side of the town. Angel Hill is an elevation near the south town line.

There were 373 households out of which 31.4% had children under the age of 18 living with them, 62.7% were married couples living together, 9.9% had a female householder with no husband present, and 24.9% were non-families. 20.4% of all households were made up of individuals and 11.0% had someone living alone who was 65 years of age or older. The average household size was 2.56 and the average family size was 2.94.

Communities and locations in Exeter