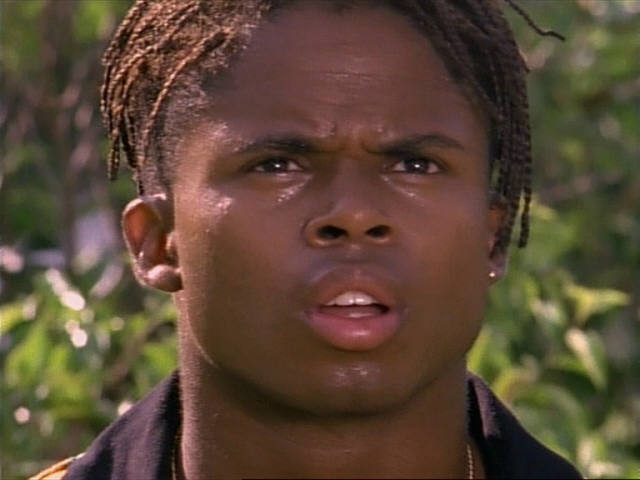 Zachary "Zack" Taylor is a in the universe, appearing in the "". He is the original of the first generation of Power Rangers. He was played by Walter Jones.

He was also played by Jones in the pre-television pilot as "Zack" (the surname didn't come until the TV series). Surprisingly, Zack is the only Ranger from the original team to not appear in the video game "".

Zack and his close friends , , and were picked as the five original Power Rangers by . Zack was chosen as the Black Power Ranger, gaining the Power Coin and the Mastodon Dinozord.

Quick witted and clever, Zack relies on a combination of skill, strength, and agility to win his battles. The original Black Ranger is an energetic, charismatic and perpetually fun-loving young man. He enjoys athletics (such as basketball, American football, and scuba diving), dancing, parties, and girls. Whenever he didn't have an arm around Trini or Kimberly, Zack could be found pursuing his attractive, but hard-to-get classmate, Angela. Zack always loved a good joke. Though he loved all the people close to him, Zack's best friend was clearly Jason.

Zack is extremely confident and positive. Only three occasions saw Zack ready to give up: when the Green Ranger took out Zordon, and the Command Center while removing the Rangers from the Megazord; when his team was placed under a spell to take away their confidence; and when their Dinozords were commandeered by 's first monster, Pirantishead. Oddly enough, despite his plentiful confidence, Zack is an extreme ophidiophobe and arachnophobe. He also hated bugs, although, on one occasion when performing magic for a group of children seeking shelter from a monster attack, he handled two fake snakes and used them to scare off . Because of this, it can be assumed that Zack's fear of snakes deteriorated over time, especially after an encounter on Rita's Island of Illusion where his strength of will was tested against his fear of snakes.

Zack enjoyed just as much as he did dancing and, as a result, created his own fighting style, called Hip Hop kido. The customized art consisted of dance-like maneuvers flourished with fast and powerful strikes, much like . This effective combination of power and prowess made Zack an incredibly formidable combatant. He was also very resourceful. On several occasions, it was his cunning that lead to the victory of his team. Such occasions included his discovery of the means to overcome the Nasty Knight who was sent to isolate and destroy him on his birthday- the monster possessed the ability to redistribute the Ranger's force in order to fry the weapons they used against him. When the storm-bringing chimera monster Goatan froze the Megazord, Zack analyzed what little resources the Megazord had left and used it to regain dominance in the battle.

After joined the team, he and Zack quickly became close friends as a result of their similar interests. When Tommy was nervous about trying to engage a romantic relationship with Kimberly, it was Zack who Tommy sought for advise. Before Tommy appeared (or if Tommy is not at the Youth Center) Zack is usually Jason's sparring partner when practicing Karate. Tommy and Zack would also act as sparring partners for each other, as well. Though Jason was the Ranger Tommy selected to take on his Green Ranger powers after Rita eliminated Tommy's link to the Morphing Grid, Zack is the only other individual to don the Dragon Shield when Tommy gave it to him so that it's enhanced regenerative powers could heal Zack from the Oysterizer monster's acidic attack.

In the Season 2 episode "Green No More, Part 1, Zack's cousin Curtis was introduced, who would have a small recurring role throughout the middle of the season. Curtis was very similar to Zack due to their similar interests in dance and music, as well as their smooth-talking speech pattern. He also formed a friendship with Trini's crush Richie. The two once even managed to fight off a group of Putties while they were skating.

Zack left the team along with Jason and Trini to attend a peace conference in . His replacement was .

There was controversy surrounding the fact that an African-American was playing "the black ranger." The petitioned FOX in 1994 to take the show off the air, citing the show had racist undertones. Little was done about this until the character of Zack was written out of the television program along with the characters of Jason and Trini. This has largely been attributed to the idea that the actors for all three characters were unhappy with their low salaries and long hours.