Reservoirs and dams in Laos

Reservoirs and dams in Laos

Hydro-electric power is one of the few significant resources in Laos with an estimated (theoretical) potential of 18000MW. 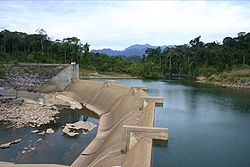 A section of the Theun-Hinboun Dam © Laurence McGrath, 2005

All existing and potential dams are on tributaries of Laos's main river, the Mekong. The country's earliest major dam is on the Ngum river near Vientiane providing 150MW mainly for domestic consumption. Completed in 1971 with Japanese aid, it flooded 370km² of forest and farmland to create the country's largest reservoir. Other major schemes are for export of electricity. Currently, the largest dam is the 80m Houay-Ho dam in the south of the country producing 150MW. One of the most productive has been the Theun-Hinboun scheme in the center of the country. With a relatively small dam and reservoir, it works by transferring most of the Theun river to the neighbouring (and lower) Hinboun river by tunnel, producing 210MW. Theun-Hinboun provides substantial economic benefits to Laos through energy sales to neighboring Thailand, local energy supplies in Laos, and regional development benefits. [www.thpclaos.com]

At least eleven sites have been identified for a series of further large dams to be built up to 2020 to produce a total of 5000MW. Thailand would be supplied by a dam on the Ngiep and further dams on the Ngum and Theun, other sites being on the Kong, Mo, Xe Pian and Xe Kaman in the south of the country for supply to Vietnam. With political support, the only questions concern raising finance on the international markets. The largest dam planned is the Nam Theun II, 50km upstream of Theun-Hinboun. This will be 50m high, provide 1000MW and flood an area of 450km², construction cost being around half the annual Laos GDP. Final hurdles to starting construction appear to have been cleared early in 2005, despite considerable environmental opposition.

The controversy of dam building mirrors that concerning globalization. Proponents argue that the dams provide a sustainable source of foreign currency vital for economic growth, achieved primarily by selling electricity to neighbouring Thailand. Opponents argue that most of the income is needed to pay off foreign debt, and the locals who suffer most upheaval never get properly compensated. Flooding and water diversion adversely affect the environment, and projects can end up less profitable than expected due to silting and/or market changes.