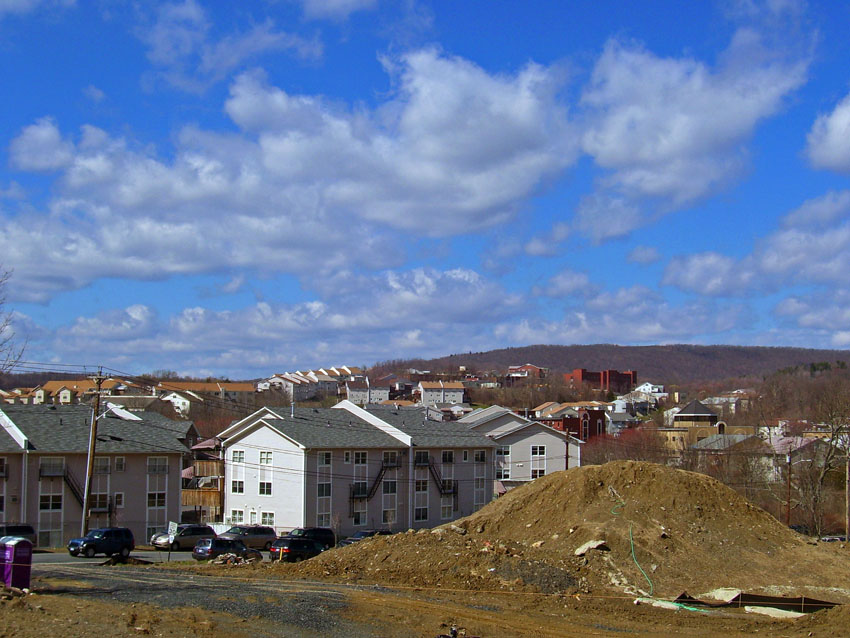 Kiryas Joel (also known as "Kiryas Yo'el" or "KJ") (Hebrew: קרית יואל, " of ") is a within the town of Monroe in , . The great majority of its residents are Hasidic s who strictly observe the and its commandments, and belong to the worldwide Satmar Hasidic dynasty.

Most of the village's residents speak as their first language. The village has the youngest (15.0) of any population center of over 5,000 residents in the United States.

Kiryas Joel is named for , the "" of Satmar and driving spirit behind the project. Teitelbaum himself helped select the location a few years before his death in 1979. Rabbi Teitelbaum was the founding "rebbe" of the Satmar Hasidic dynasty, originally from . The Satmars who established Kiryas Joel came from Szatmarnemeti, Hungary (now Satu Mare, Romania), Teitelbaum's hometown, whose 12,000 Jewish residents were deported to .

In 1946, Teitelbaum originally settled with his followers in . By the 1970s, however, he decided to move the growing community to a location that was not far from the commercial center of but was also more secluded from what he saw as the harmful influences and immorality of the outside world. Teitelbuam's choice was Monroe. The land for Kiryas Joel was purchased in 1977, and fourteen Satmar families settled there. By 2006, there were over 3,000. When he died in 1979, Rabbi Teitelbaum was the first person to be buried in the town's cemetery. His funeral reportedly brought over 100,000 mourners to Kiryas Joel at that time.

The village has become a contentious issue in Orange County for several reasons, mainly related to its rapid growth.

Monroe also contains two other villages, Monroe and Harriman. Kiryas Joel's boundaries also come close to the neighboring towns of Blooming Grove and Woodbury.Residents of these communities and local Orange County politicians view the village as encroaching on them. Due to the rapid population growth occurring in Kiryas Joel, resulting almost entirely from the high birth rates of its Hasidic population, the village government has undertaken various efforts to expand its area, to the dismay of the majority of the residents of the surrounding communities. Many of these area residents see the expansion of the high-density residential, commercial village as a threat to the in the surrounding suburban communities. They view it as a prime source of (most land surrounding it is largely undeveloped). This designation is questionable, because the high density townhouses and condominiums of Kiryas Joel take up much less space per person than the typical suburban community. Only 5.4% of housing units in Kiryas Joel are single, detached houses,

On , , residents of Woodbury voted by a 3-to-1 margin to incorporate much of the town as a village to constrain further annexation. Kiryas Joel has vigorously opposed such moves in court,.Fact|date=October 2007 and even some Woodbury residents are concerned about adding another layer of taxation without any improved defense against annexations.

In March 2007, the village sued the county to stop it from selling off a million gallons (3,780 m³) of excess capacity at its sewage plant in Harriman. Two years before, the county had sued the village to stop it from tapping into New York City's , arguing that the village's environmental review for the project had inadequately addressed concerns about the additional wastewater it would generate. The village is appealing an early ruling siding with the county.

In its action, Kiryas Joel accuses the county of inconsistently claiming limited capacity in its suit when it is selling the million gallons to three communities outside its sewer district.

Critics of the village cite its impact on local politics. Villagers are perceived as voting in a solid bloc. While this is not always the case, the highly concentrated population often does skew strongly toward one candidate or the other in local elections, making Kiryas Joel a heavily-courted swing vote for whichever politician offers Kiryas Joel the most favorable environment for continued growth.

Kiryas Joel played a major role in the 2006 Congressional election. The village sits in the 19th Congressional District, represented at that time by Republican . Village residents had been loyal to Kelly in the past, but in 2006, voters were upset over what they saw as lack of adequate representation from Kelly for the village. In a bloc, Kiryas Joel swung around 2,900 votes to Kelly's Democratic opponent, John Hall in that year's election. The vote in Kiryas Joel was a major reason Hall carried Orange County, as he defeated Kelly in the county by 93 votes.

Women usually stop working outside the home after the birth of a second child. Most families have only one income and many children. The resulting rate makes a disproportionate number of families in Kiryas Joel eligible for welfare benefits when compared to the rest of the county; and cost of welfare benefits is subsidized by taxes paid county-wide. The "New York Times" wrote,

The unusual lifestyle and growth pattern of Kiryas Joel has led to litigation on a number of fronts. Most noted in legal circles is the "Grumet" decision about school district boundaries; but there has also been litigation over what entity should pay for the education of children with disabilities in Kiryas Joel, and over whether the community's boys must ride buses driven by women. main|Board of Education of Kiryas Joel Village School District v. Grumet

In 1994, the Supreme Court ruled that the Kiryas Joel school district, which covered only the village, was designed in violation of the of the 1st Amendment, because the design accommodated one group on the basis of religious affiliation. 512 U.S. 687 (1994). Subsequently, the New York State Legislature established a similar school district in the town that has passed legal muster. [ " [http://query.nytimes.com/gst/fullpage.html?sec=health&res=9904E7DA133FF933A15757C0A9649C8B63 Controversy Over, Enclave Joins School Board Group] " by Tamar Lewin, , april 20, 2002]

In the local media