There is evidence of a controversy over religious male circumcision in Early Christianity. A Council of Jerusalem,[1] possibly held in approximately 50 AD, decreed that male circumcision was not a requirement for Gentile converts. This became known as the "Apostolic Decree"[2] and may be one of the first acts differentiating Early Christianity from Judaism.[3] At roughly the same time Rabbinic Judaism made their circumcision requirement for Jewish boys even stricter.[4]

According to the Columbia Encyclopedia,[5] "the decision that Christians need not practice circumcision is recorded in Acts 15;[6] there was never, however, a prohibition of circumcision, and it is practiced by Coptic Christians."

Main article: Circumcision in the Bible

There are numerous references in the Hebrew Bible to the obligation for circumcision among Jews. For example, Leviticus 12:3[7] says:

On the eighth day a boy is to be circumcised.

And the uncircumcised are to be cut off from the Jewish people - Genesis 17:14:[8]

Any uncircumcised male, who has not been circumcised in the flesh, will be cut off from his people; he has broken my covenant.

According to the Jewish Encyclopedia article on circumcision of proselytes:[9] 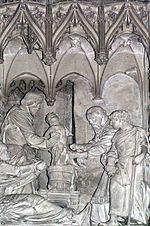 According to the Gospel of Luke, Jesus was circumcised eight days after his birth, in accordance with Mosaic Law.[11]

Disputes over the Mosaic Law or Old Covenant generated intense controversy in Early Christianity. This is particularly notable in the mid-1st century, when the circumcision controversy came to the fore. Alister McGrath, a proponent of Paleo-orthodoxy, claimed that many of the Jewish Christians were fully faithful religious Jews, only differing in their acceptance of Jesus as the Messiah.[12] As such, they believed that circumcision and other requirements of the Mosaic Law were required for salvation, if one equates fully faithful religious Jews with Legalism (theology), for a counterview, see Covenantal nomism. See also Judaism and Christianity. Those in the Christian community who insisted that biblical law, including laws on circumcision, continued to apply to Christians were pejoratively labeled Judaizers by their opponents and criticized as being elitist and legalistic, besides other claimed sins.[13] 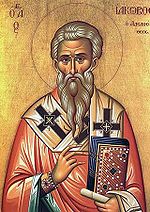 The Council of Jerusalem[6] of about 50 AD was the first meeting in early Christianity called upon to consider the application of Mosaic Law to the new community. Specifically, it had to consider whether new Gentile converts to Christianity were obligated to undergo biblical circumcision for full membership in the Christian community, but it was conscious that the issue had wider implications, since circumcision is the "everlasting" sign of the Abrahamic Covenant.[14] Jewish culture was still trying to find its place in the more dominant Hellenistic culture which found circumcision to be repulsive.[15]

At the time, the Christian community would have considered itself a part of the wider Jewish community, with most of the leaders of the Church being Jewish or Jewish proselytes.

The decision of the Council came to be called the Apostolic Decree[16] and was that most Mosaic law[17], including the requirement for circumcision of males, was not obligatory for Gentile converts, possibly in order to make it easier for them to join the movement.[18] However, the Council did retain the prohibitions against eating meat containing blood, or meat of animals not properly slain, and against "fornication" and "idol worship".[19] Beginning with Augustine of Hippo,[20] many have seen a connection to Noahide Law, while some modern scholars[21] reject the connection to Noahide Law[22] and instead see Lev 17-18[23] as the basis. See also Old Testament Law directed at non-Jews and Leviticus 18. In effect, however, the Jerusalem Church created a double standard: one for Jewish Christians and one for Gentile converts. See Dual-covenant theology for the modern debate.

The Decree may be a major act of differentiation of the Church from its Jewish roots,[24] the first being the Rejection of Jesus.[25] Although the outcome is not inconsistent with the Jewish view on the applicability of Mosaic Law to non-Jews, see also Jewish background to the early Christian circumcision controversy, the Decree created a category of persons who were members of the Christian community (which still considered itself to be part of the Jewish community) who were not considered to be full converts of the wider Jewish community. These partial converts were welcomed, a common term for them being "God fearers" (similar to the modern movement of B'nei Noah), but there were certain rituals[26] and areas in the Temple from which they (Gentiles) were excluded, just as, for example, only the Kohen Gadol could enter the Kodesh Hakodashim of the Temple. This created problems especially when the Christian community had become dominated by new Gentile members with less understanding of the biblical reasons for the dispute.

See also: Pauline Christianity and Paul of Tarsus and Judaism

While the issue was theoretically resolved, it continued to be a recurring issue among Christians. Four years after the Council of Jerusalem, Paul wrote to the Galatians about the issue, which had become a serious controversy in their region. There was a burgeoning movement of Judaizers in the area that advocated adherence to traditional Mosaic laws, including circumcision. According to McGrath, Paul identified James the Just as the motivating force behind the movement. Paul considered it a great threat to his doctrine of salvation through faith and addressed the issue with great detail in Galatians 3.[28][29]

Paul, who called himself Apostle to the Gentiles, attacked the practice, though not consistently. In the case of Timothy, whose mother was Jewish Christian but whose father was Greek, he personally circumcised him "because of the Jews" that were in town.[30][31] He also appeared to praise its value in Romans 3:1-2.[32]

Two interpretations exist of Paul's comment on those wanting to force circumcision on Gentile Christians in Galatians 5:12. The KJV reading "I would they were even cut off" suggests cut off from the church, but most modern versions, following scholars such as Lightfoot, R. C. H. Lenski and F. F. Bruce, read as the ESV "I wish those who unsettle you would emasculate themselves!" - due to a reading of the Greek text apokopsontai[33] "be cut off" as Paul wishing that the circumcisers would castrate themselves.[34] This parallels κατατομή katatomē. Eusebius reported that the early Christian Origen did in fact castrate himself, though following Matthew 19:12.[35]

Paul argued that circumcision no longer meant the physical, but a spiritual practice.(Romans 2:25-29) And in that sense, he wrote: "Is any man called being circumcised? let him not become uncircumcised" (1 Corinthians 7:18) - probably a reference to the practice of epispasm[36]

Later Paul more explicitly denounced the practice, rejecting and condemning those who promoted circumcision to Gentile Christians. Paul warned that the advocates of circumcision were "false brothers".(Gal 2:4) He accused Galatian Christians who advocated circumcision of turning from the Spirit to the flesh: "Are you so foolish, that, whereas you began in the Spirit, you would now be made perfect by the flesh?" (Gal 3:3) He accused advocates of circumcision of wanting to make a good showing in the flesh (Gal 6:12) and of glorying or boasting of the flesh (Gal 3:13). Some believe Paul wrote the entire Epistle to the Galatians attacking circumcision and any requirement for the keeping of Jewish law by Christians, saying in chapter five: "Mark my words! I, Paul, tell you that if you let yourselves be circumcised, Christ will be of no value to you at all." (Galatians 5:2). However, no Christian denomination today is known to reject members who are circumcised.[citation needed]

In a late letter he warned Christians to "Beware of dogs, beware of evil workers, beware of the concision," (κατατομή, katatomē)[37] saying that Christians were the true circumcision because they worshipped in the Spirit of God (Phil 3:2-3).

Florentine Bechtel (1910) The Catholic Encyclopedia: Judaizers[38] notes: "Paul, on the other hand, not only did not object to the observance of the Mosaic Law, as long as it did not interfere with the liberty of the Gentiles, but he conformed to its prescriptions when occasion required (1 Corinthians 9:20). Thus he shortly after circumcised Timothy (Acts 16:1-3), and he was in the very act of observing the Mosaic ritual when he was arrested at Jerusalem (Acts 21:26)." 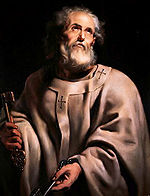 St. Peter holding the Keys of Heaven, by Rubens

Simon Peter, who later came to be called the first Pope, condemned required circumcision of converts.[39] When the various passages from the New Testament regarding circumcision are gathered together, a strongly negative view of circumcision emerges, according to Michael Glass.[40] Some Biblical scholars think that the Epistle of Titus, generally attributed to Paul, but see Authorship of the Pauline epistles, may state that circumcision should be discouraged among Christians,[41] though others believe this is merely a reference to Jews. Circumcision was so closely associated with Jewish men that Jewish Christians were referred to as "those of the circumcision"[42][43] or conversely Christians who were circumcised were referred to as Jewish Christians or Judaizers. These terms (circumcised/uncircumcised) are generally interpreted to mean Jews and Greeks, who were predominate, however it is an oversimplification as 1st century Iudaea Province also had some Jews who were not circumcised, and some Greeks (called Proselytes or Judaizers) and others such as Egyptians, Ethiopians, and Arabs who were.

A common interpretation of the circumcision controversy of the New Testament was, that it was over the issue of whether Gentiles could enter the Church directly or ought to first convert to Judaism. However, the Halakha of Rabbinic Judaism was still under development at this time, as the Jewish Encyclopedia[44] notes: "Jesus, however, does not appear to have taken into account the fact that the Halakha was at this period just becoming crystallized, and that much variation existed as to its definite form; the disputes of the Bet Hillel and Bet Shammai were occurring about the time of his maturity." This controversy was fought largely between opposing groups of Christians who were themselves ethnically Jewish, see section Jewish background above. According to this interpretation, those who felt that conversion to Judaism was a prerequisite for Church membership were eventually condemned by Paul as "Judaizing teachers".

The source of this interpretation is unknown; however, it appears related to Supersessionism or Hyperdispensationalism (see also New Perspective on Paul). In addition, modern Christians, such as Ethiopian Orthodox and Coptic Orthodox still practice circumcision while not considering it a part of conversion to Judaism, nor do they consider themselves to be Jews or Jewish Christians.

The Jewish Encyclopedia article on Gentile: Gentiles May Not Be Taught the Torah[45] notes the following reconciliation:

Today, most Christian denominations are neutral about ritual male circumcision, neither requiring it nor forbidding it. The practice is customary among the Coptic, Ethiopian, and Eritrean Orthodox Churches, and also some other African churches.[46] Some Christian churches in South Africa oppose circumcision, viewing it as a pagan ritual, while others, including the Nomiya church in Kenya,[46][47] require circumcision for membership. Some participants in focus group discussions in Zambia and Malawi said that Christians should practice circumcision because Jesus was circumcised and the Bible teaches the practice.

The Greek Orthodox Church celebrates the Circumcision of Christ on 1 January,[48] while Orthodox churches following the Julian calendar celebrate it on 14 January. The Russian Orthodox Church considers it a "Great Feast".[49] In the Catholic, Anglican and Lutheran churches it has been replaced by other commemorations.[50]