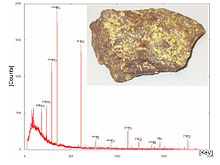 The gamma-ray spectrum of natural uranium, showing about a dozen discrete lines superimposed on a smooth continuum, allows the identification the nuclides 226Ra, 214Pb, and 214Bi of the uranium decay chain.

Gamma-ray spectroscopy is the quantitative study of the energy spectra of gamma-ray sources, both nuclear laboratory, geochemical, and astrophysical. Gamma rays are the highest-energy form of electromagnetic radiation, being physically exactly like all other forms (e.g., X rays, visible light, infrared, radio) except for higher photon energy and frequency, and shorter wavelength. (Because of their high energy, gamma-ray photons are generally counted individually, whereas the lowest energy forms of EM radiation (e.g., radio to sub-millimeter) are observed as electromagnetic waves consisting of many low-energy photons.) While a Geiger counter or Gamma Probe determine only the count rate (i.e. the number of gamma rays interacting in the detector in one second), a gamma-ray spectrometer also determines the energies of the gamma-rays photons emitted by the source. Radioactive nuclei (radionuclides) commonly emit gamma rays in the energy range from a few keV to ~10 MeV, corresponding to the typical energy levels in nuclei with reasonably long lifetimes. Such sources typically produce gamma-ray "line spectra" (i.e., many photons emitted at discrete energies), whereas much higher energies (upwards of 1 TeV) may occur in the continuum spectra observed in astrophysics and elementary particle physics. The boundary between gamma rays and X rays is somewhat blurred, as X rays typically refer to the high energy EM emission of atoms, which may extend to over 100 keV, whereas the lowest energy emissions of nuclei are typically termed gamma rays, even though their energies may be below 20 keV.

Most radioactive sources produce gamma rays of various energies and intensities. When these emissions are collected and analyzed with a gamma-ray spectroscopy system, a gamma-ray energy spectrum can be produced. A detailed analysis of this spectrum is typically used to determine the identity and quantity of gamma emitters present in the source. The gamma spectrum is characteristic of the gamma-emitting nuclides contained in the source, just as in optical spectroscopy, the optical spectrum is characteristic of the atoms and molecules contained in the sample.

A gamma spectroscopy system consists of a detector, electronics to collect and process the signals produced by the detector, and a computer with processing software to generate, display, and store the spectrum. Other components, such as rate meters and peak position stabilizers, may also be included.

Gamma spectroscopy detectors are passive materials that wait for a gamma interaction to occur in the detector volume. The most important interaction mechanisms are the photoelectric effect, the Compton effect, and pair production. The photoelectric effect is preferred, as it absorbs all of the energy of the incident gamma ray. Full energy absorption is also possible when a series of these interaction mechanisms take place within the detector volume. When a gamma ray undergoes a Compton interaction or pair production, and a portion of the energy escapes from the detector volume without being absorbed, the background rate in the spectrum is increased by one count. This count will appear in a channel below the channel that corresponds to the full energy of the gamma ray. Larger detector volumes reduce this effect.

The voltage pulse produced by the detector (or by the photomultiplier in a scintillation detector) is shaped by a multichannel analyzer (MCA). The multichannel analyzer takes the very small voltage signal produced by the detector, reshapes it into a Gaussian or trapezoidal shape, and converts that signal into a digital signal. In some systems, the analog-to-digital conversion is performed before the peak is reshaped. The analog-to-digital converter (ADC) also sorts the pulses by their height. ADCs have specific numbers of "bins" into which the pulses can be sorted; these bins represent the channels in the spectrum. The number of channels can be changed in most modern gamma spectroscopy systems by modifying software or hardware settings. The number of channels is typically a power of two; common values include 512, 1024, 2048, 4096, 8192, or 16384 channels. The choice of number of channels depends on the resolution of the system and the energy range being studied.

The multichannel analyzer output is sent to a computer, which stores, displays, and analyzes the data. A variety of software packages are available from several manufacturers, and generally include spectrum analysis tools such as energy calibration, peak area and net area calculation, and resolution calculation.

Gamma spectroscopy systems are selected to take advantage of several performance characteristics. Two of the most important include detector resolution and detector efficiency.

The most common figure used to express detector resolution is full width at half maximum (FWHM). This is the width of the gamma ray peak at half of the highest point on the peak distribution. Resolution figures are given with reference to specified gamma ray energies. Resolution can be expressed in absolute (i.e., eV or MeV) or relative terms. For example, a sodium iodide (NaI) detector may have a FWHM of 9.15 keV at 122 keV, and 82.75 keV at 662 keV. These resolution values are expressed in absolute terms. To express the resolution in relative terms, the FWHM in eV or MeV is divided by the energy of the gamma ray and multiplied by 100. Using the preceding example, the resolution of the detector is 7.5% at 122 keV, and 12.5% at 662 keV. A germanium detector may give resolution of 560 eV at 122 keV, yielding a relative resolution of 0.46%.

Scintillation detectors use crystals that emit light when gamma rays interact with the atoms in the crystals. The intensity of the light produced is proportional to the energy deposited in the crystal by the gamma ray. The mechanism is similar to that of a thermoluminescent dosimeter. The detectors are joined to photomultipliers that convert the light into electrons and then amplify the electrical signal provided by those electrons. Common scintillators include thallium-doped sodium iodide (NaI(Tl))—often simplified to sodium iodide (NaI) detectors—and bismuth germanate (BGO). Because photomultipliers are also sensitive to ambient light, scintillators are encased in light-tight coverings.

Scintillation detectors can also be used to detect alpha- and beta-radiation. 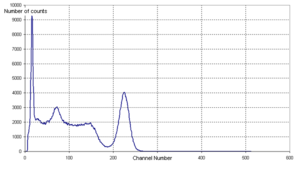 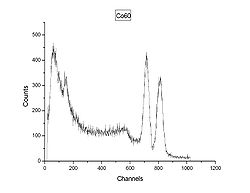 NaI(Tl) is also convenient to use, making it popular for field applications such as the identification of unknown materials for law enforcement purposes.

An example of a NaI spectrum is the gamma spectrum of the cesium isotope 137Cs—see Figure 1. 137Cs emits a single gamma line of 662 keV. It should be noted that the 662 keV line shown is actually produced by 137Bam, the decay product of 137Cs, which is in secular equilibrium with 137Cs.

The spectrum in Figure 1 was measured using a NaI-crystal on a photomultiplier, an amplifier, and a multichannel analyzer. The figure shows the number of counts (within the measuring period) versus channel number. The spectrum indicates the following peaks (from left to right):

The Compton distribution is a continuous distribution that is present up to channel 150 in Figure 1. The distribution arises because of primary gamma rays undergoing Compton scattering within the crystal: Depending on the scattering angle, the Compton electrons have different energies and hence produce pulses of different heights.

If many gamma rays are present in a spectrum, Compton distributions can present analysis challenges. To reduce gamma rays, an anticoincidence shield can be used—see Compton suppression. Gamma ray reduction techniques are especially useful for small lithium-doped germanium (Ge(Li)) detectors.

The gamma spectrum shown in Figure 2 is of the cobalt isotope 60Co, with two gamma rays with 1.17 MeV and 1.33 MeV respectively. (See the decay scheme article for the decay scheme of cobalt-60.) The two gamma lines can be seen well-separated; the peak to the left of channel 200 most likely indicates a strong background radiation source that has not been subtracted. A backscatter peak can be seen at channel 150, similar to the second peak in Figure 1.

Sodium iodide systems, as with all scintillator systems, are sensitive to changes in temperature. Changes in the operating temperature caused by changes in environmental temperature will shift the spectrum on the horizontal axis. Peak shifts of tens of channels or more are commonly observed. Such shifts can be prevented by using spectrum stabilizers.

Because of the poor resolution of NaI-based detectors, they are not suitable for the identification of complicated mixtures of gamma ray-producing materials. Scenarios requiring such analyses require detectors with higher resolution. 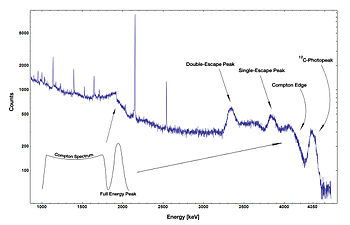 Semiconductor detectors, also called solid-state detectors, are fundamentally different from scintillation detectors: They rely on detection of the charge carriers (electrons and holes) generated in semiconductors by energy deposited by gamma ray photons.

In semiconductor detectors, an electric field is applied to the detector volume. An electron in the semiconductor is fixed in its valence band in the crystal until a gamma ray interaction provides the electron enough energy to move to the conduction band. Electrons in the conduction band can respond to the electric field in the detector, and therefore move to the positive contact that is creating the electrical field. The gap created by the moving electron is called a "hole," and is filled by an adjacent electron. This shuffling of holes effectively moves a positive charge to the negative contact. The arrival of the electron at the positive contact and the hole at the negative contact produces the electrical signal that is sent to the preamplifier, the MCA, and on through the system for analysis. The movement of electrons and holes in a solid-state detector is very similar to the movement of ions within the sensitive volume of gas-filled detectors such as ionization chambers.

If a gamma spectrometer is used for identifying samples of unknown composition, its energy scale must be calibrated first. Calibration is performed by using the peaks of a known source, such as cesium-137 or cobalt-60. Because the channel number is proportional to energy, the channel scale can then be converted to an energy scale. If the size of the detector crystal is known, one can also perform an intensity calibration, so that not only the energies but also the intensities of an unknown source—or the amount of a certain isotope in the source—can be determined.