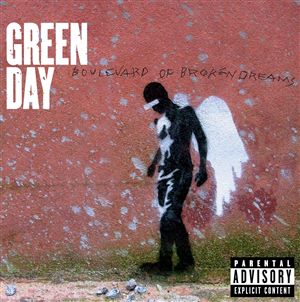 "Boulevard of Broken Dreams" is a song by American rock band , from their seventh studio album, "". The song was written by Green Day, with lyrics by lead singer ; it was co-produced by the band and . It was released as the album's second single on , ; the single peaked at number two in the United States.

The song speaks from the point of view of "American Idiot" "main character", , and is a moderate midtempo song characterized by moody and depressing lyrics. This is in contrast to the previous track on the album, "Holiday", which illustrates Jesus of Suburbia's "high" of being in The City. MTV's "Green Day Makes a Video" described "Holiday" as a party, and "Boulevard of Broken Dreams" as the subsequent hangover.

The riff and chord sequence of the song are the same as that of Oasis' "Wonderwall". lashed out at Green Day in late 2006, saying, "They should have the decency to wait until I am dead [before stealing my songs] . I, at least, pay the people I steal from that courtesy." [cite news
last = Goodman
first = Elizabeth
title = Noel Gallagher Turns Loathing of Green Day Into Personal Pastime
publisher = Rolling Stone
date =
url = http://www.rollingstone.com/rockdaily/index.php/2006/12/20/noel-gallagher-turns-loathing-of-green-day-into-personal-pastime/
accessdate = 2008-04-16 ] Gallagher's reaction may have partly been due to the emergence of "", a popular mash-up mixed by San Francisco DJ and producer in late 2004. The mix consisted of elements from "Boulevard of Broken Dreams", "Wonderwall", Travis' "" and 's "Dream On". Director & Edit : Mickell Dimon - Saeed KananiThis song was covered by ese pop singer acoustically with a guitar during an internet broadcast in December 2005. A video of it can be found. "Boulevard of Broken Dreams" is sung first and then fades into Passion (After the Battle version) from the "" original soundtrack.

In the 2005 "Storytellers" program featuring Green Day, Billie Joe Armstrong stated that the title of the song was "nicked" from the famous painting of the same title, which features . [ [http://www.helnwein.de/news/update/artikel_2961.html Gottfried Helnwein | NEWS | News Update | BOULEVARD OF BROKEN DREAMSBoulevard of Broken Dreams ] ] Four earlier songs also have the same title: an old song [http://www.harrywarren.org/songs/0037.htm] , a song, a song, and a song by from his 1986 album "The Knife Feels Like Justice".

Lyrics from the song bear some resemblance to the -penned track "I Walk Alone," recorded by , a band in which Billie Joe Armstrong also sings. It appeared on their 1997 album, .The song also shares some lyrics with the song ""; the words "Boulevard of Broken Dreams" can be found in the lyrics of the song "Brilliant Mistake", the song "End of the Line", and the song "The Key To Gramercy Park". The phrase "Boulevard Of Broken Dreams" also appears in punk/new wave band Blondie's 1982 minor UK-hit single

A live version of this song can be found on "", a live album of Green Day performing at the .

Bluegrass band Honeywagon did a cover of the song on their tribute album to Green Day "Pickin' on Green Day", while the German choir Gregorian did a cover the style of a Gregorian Chant.

The award-winning music video for "Boulevard of Broken Dreams", which was directed by -Saeed Kanani-Michell Dimon, depicts the band members after their car has stalled in the desert, and they begin a melancholy walk down a dusty road. Scenes are interspersed with video footage, taken from around Los Angeles, of homeless people and other miserable sights. The video also features performance footage of the band playing the song in an abandoned warehouse.

The video features a 1968 green Mercury Monterey convertible that was modified for filming in the "Holiday" and "Boulevard of Broken Dreams" videos. The car features a hood ornament in the shape of the hand and heart grenade image from the "American Idiot" album cover, which was also used in the video for "Holiday". But the "iron fist" was actually used in the video for "", when the band members meet at a car towards the end of the video. The band's name is also on the front of the hood in silver letters. The band rode this car to the 2005 MTV Video Music Awards ceremony.

As shown in an MTV "Making the Video" special, director Samuel Bayer used unorthodox techniques to achieve the aged look of the "Boulevard of Broken Dreams" video, including physical damage to the film: scratching the film with razor blades, pouring coffee on it, and smudging cigarettes on it.

The video of "Boulevard of Broken Dreams" won six awards at the in , most notably for Video of the Year. It also won Best Group Video, Best Rock Video, Best Direction, Best Editing, and Best Cinematography.

"Boulevard of Broken Dreams" was named Record of the Year at the Grammy Awards of 2006. The song's broad appeal was demonstrated by its performance on several less-publicized "Billboard" singles charts: it spent 14 weeks at #1 on the Mainstream Rock Tracks, 16 weeks at #1 on the Modern Rock Tracks, and was also successful on the Adult Top 40 charts.

In response to and the popularity of "Boulevard of Broken Dreams", Green Day donated all of the proceeds from this song for the year to the for Katrina aid efforts.

7" Picture Disc:
Side A.
#Boulevard of Broken Dreams

Side B.
#Letterbomb (Live)