The A20-series Mitsubishi Colt 1000, 1100, 1200, and 1500 is a series of passenger cars produced by Shin Mitsubishi Heavy-Industries, Ltd, one of the companies which would become Mitsubishi Motors.[1] Built from 1963 until 1970, they were available in four bodystyles (2-dr/4-dr sedan, 2-dr van, and 4-dr wagon) and on two different wheelbases. After a May 1968 facelift, they were marketed as the "New Colt". Along with the smaller, fastback Colts they formed the mainstay of Mitsubishi's passenger car lineup in the 1960s. With the late 1969 introduction of the new Colt Galant, the outmoded Colt-series soon faded away.

Available as a four-door sedan, with a traditional Panhard layout, the A20 Colt 1000 was powered by a 977 cc engine producing 51 PS (38 kW) at 6,000 rpm. The Colt 1000 was introduced in July 1963.[3] Top speed was 125 km/h (78 mph).[4] Traditional throughout, the Colt 1000 also had a column shifter for its four-speed manual transmission. In December 1965, a 3-speed semi-automatic transmission was also added, unfortunately named SCAT (Single Coupling Automatic Transmission).[5] Top speed remained the same. There was also a two-door wagon, known as the "Van", as is typical in Japan where wagons are traditionally only for commercial purposes, which featured a horizontally divided tailgate and a maximum 400 kg (882 lb) payload (200 kg with 4 passengers).[6]

In motorsport, Colt 1000-based touring cars took a clean sweep of the podium in their class at the 1964 Japanese Grand Prix,[7] following the successes of the preceding Mitsubishi 500 and Colt 600s. 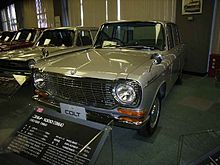 Along with trim differences, such as a different grille without a dip in the lower middle part, bumper overriders meant that the 1100 was also 35 mm (1.4 in) longer than its predecessor. Somehow the weight dropped by 40 kilos, to 800 kg (1,764 lb).[4] The 1100 was also available with a floor-mounted shifter, unlike the 1000 and later 1200. Originally available in Standard or DeLuxe trims, a Sporty DeLuxe version joined the lineup soon after its introduction. This also formed the basis for the Colt 1500 SS. The Colt 1100 was replaced by the "New Colt" 1200 in 1968. 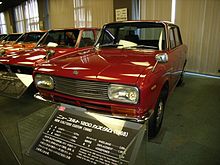 Along with a May 1968 facelift, whereby the Colt became the "New Colt", the engine was upgraded again: with the long-stroke 1,189 cc and 62 PS (46 kW) KE46 it became the Mitsubishi New Colt 1200, chassis code A23. "New Colts" are easily recognized by the large rectangular headlights rather than the earlier round ones, along with a lower front grille and more sloping tip of the hood. On the rear, wide slim rectangular taillamps replaced the earlier round ones. All New Colt sedans were built on the longer body of the Colt 1500, which received the same upgrades simultaneously.

Available as a two-door and four-door sedan, and also as a two-door wagon ("Van", still with the shorter wheelbase), the Colt 1200 could reach 140 km/h (87 mph). An extremely rare four-door wagon, more luxuriously equipped than the Van and with entirely different rear bodywork was added later, and was aimed at private rather than commercial use. A four-speed, full-synchro, column shifted manual was standard, whether in Standard or Custom equipment levels.[10] The Colt 1200 remained available alongside the new Galant for a brief period in late 1969 and early 1970, but not much customer interest remained.[11]

The Mitsubishi Colt 1500 (A25)[12] was a bigger engined version, joining the smaller Colt 1000 in November 1965.[3] The engine was a bored-out, four-cylinder version of the new Debonair's six-cylinder KE64 engine. Unlike its lesser one-liter sibling, the 1500 received four headlights and sat on a 65 mm longer wheelbase (2,350 mm, 92.5 in). Originally available as a four-door sedan and two-door wagon, it was powered by a 1,498 cc engine producing 70 PS (51 kW).[13] The wagon (Colt 1500 Van) had a horizontally divided rear tailgate and used the shorter wheelbase body of the 1100; it was available in either Standard or DeLuxe trim. Equipped with a three-speed column-shifted manual, a four-speed model (Overtop, "OT") was available on sedans. The fourth gear raised the top speed from 140 to 145 km/h (87 to 90 mph). The Van versions, lower geared for more load capacity, could only reach 125 km/h (78 mph). Later, a now extremely rare four-door wagon aiming for private buyers (unlike the Van commercial vehicle) was added, as for the Colt 1200. This was more comfortably equipped than the Van version, sitting on the longer wheelbase, and with unique rear bodywork.

Echoing the Sporty DeLuxe version of the 1100, the 1500 Sports Sedan appeared in December 1966, discernible by its blacked-out grille and single headlights. Actually, the 1500 SS used the entire shorter and lighter Colt 1100 body (thus weighing in at 890 kg or 1,962 lb) and its floor-mounted shifter. It also received a close ratio four-speed transmission and front disc brakes. Top speed remained unchanged, with the quartermile sprint requiring 19.0 seconds.[11]

In May 1968 the 1500 became the New Colt, receiving the same body modifications as described in the Colt 1200 section, including the rectangular headlights. The chassis code became A27. New was a two-door sedan bodystyle, unusual in having roll-down rear windows. The three-speed was discontinued, with all standard models now receiving the 3+OT transmission. Top speeds were 145 km/h for the sedan, 135 km/h for the Van (84 and 90 mph respectively).[14] An 85 PS (63 kW), twin-SU carbureted "Super Sports" model was added in August 1968, and was popular in rallying. The Colt 1500 was discontinued in late 1969 upon the introduction of the company's Colt Galant sedan,[15] although the Colt 1200 remained available for a little longer.