Weaver ants or Green ants (genus Oecophylla) are eusocial insects of the family Formicidae (order Hymenoptera). Weaver ants are obligately arboreal and are known for their unique nest building behaviour where workers construct nests by weaving together leaves using larval silk.[2] Colonies can be extremely large consisting of more than a hundred nests spanning numerous trees and contain more than half a million workers. Like many other ant species, weaver ants prey on small insects and supplement their diet with carbohydrate-rich honeydew excreted by small insects (Hemiptera). Oecophylla workers exhibit a clear bimodal size distribution, with almost no overlap between the size of the minor and major workers.[3] [4] The major workers are approximately eight to ten millimeters in length and the minors approximately half the length of the majors. There is a division of labour associated with the size difference between workers. Major workers forage, defend, maintain and expand the colony whereas minor workers tend to stay within the nests where they care for the brood and 'milk' scale insects in or close to the nests. Oecophylla weaver ants vary in color from reddish to yellowish brown dependent on the species. Oecophylla smaragdina found in Australia often have bright green gasters. These ants are highly territorial and workers aggressively defend their territories against intruders. Because of their aggressive behaviour, weaver ants are sometime used by indigenous farmers, particularly in southeast Asia, as natural biocontrol agents against agricultural pests. Although Oecophylla weaver ants lack a functional sting they can inflict painful bites and often spray formic acid[5][6] directly at the bite wound resulting in intense discomfort.

The weaver ants belong to the ant genus Oecophylla (subfamily Formicinae) which contains two closely related living species: O. longinoda found in Sub-Saharan Africa and O. smaragdina found in southern India, southeast Asia, and Australia.[7][8] They are provisionally placed in a tribe of their own, Oecophyllini. The weaver ant genus Oecophylla is relatively old, and 15 fossil species have been found from the Eocene to Miocene deposits.[9][10] Polyrhachis and Dendromyrmex are two other genera of weaving ants that also use larval silk in nest construction, but the construction and architecture of their nests are simpler than those of Oecophylla.[2] In Australia, Oecophylla smaragdina is found in the tropical coastal areas as far south as Rockhampton and across the coastal tropics of the Northern Territory down to Broome in West Australia.

The common features of the genus include an elongated first funicular segment, presence of propodeal lobes, helcium at midheight of abdominal segment 3 and gaster capable of reflexion over the mesosoma. Males have vestigial pretarsal claws.[11] 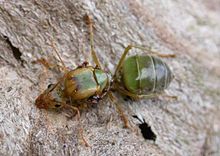 A dealate queen of O. smaragdina having shed her wings after a mating flight

O. smaragdina major workers inspecting and cleaning (allogrooming) another worker on its return to the nest, Thailand

Weaver ant colonies are founded by one or more mated females (queens).[12] A queen lays her first clutch of eggs on a leaf and protects and feeds the larvae until they develop into mature workers. The workers then construct leaf nests and help rear new brood laid by the queen. As the number of workers increases, more nests are constructed and colony productivity and growth increase significantly. Workers perform tasks that are essential to colony survival, including foraging, nest construction, and colony defense. The exchange of information and modulation of worker behaviour that occur during worker-worker interactions are facilitated by the use of chemical and tactile communication signals. These signals are used primarily in the contexts of foraging and colony defense. Successful foragers lay down pheromone trails that help recruit other workers to new food sources. Pheromone trails are also used by patrollers to recruit workers against territorial intruders. Along with chemical signals, workers also use tactile communication signals such as attenation and body shaking to stimulate activity in signal recipients. Multimodal communication in Oecophylla weaver ants importantly contribute to colony self-organization.[13][14] Like many other ant species, Oecophylla workers exhibit social carrying behavior as part of the recruitment process, in which one worker will carry another worker in its mandibles and transport it to a location requiring attention. 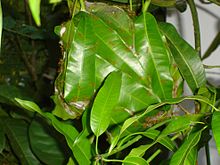 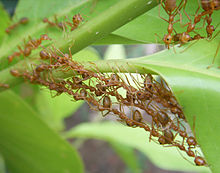 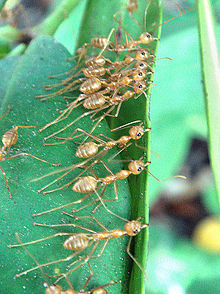 Oecophylla weaver ants are known for their remarkable cooperative behaviour used in nest construction. Possibly the first description of weaver ant's nest building behaviour was made by the English naturalist Joseph Banks, who took part in Captain James Cook's voyage to Australia in 1768. An excerpt from Joseph Banks' Journal (cited in Hölldobler and Wilson 1990) is included below:

The ants...one green as a leaf, and living upon trees, where it built a nest, in size between that of a man's head and his fist, by bending the leaves together, and gluing them with whitish paperish substances which held them firmly together. In doing this their management was most curious: they bend down four leaves broader than a man's hand, and place them in such a direction as they choose. This requires a much larger force than these animals seem capable of; many thousands indeed are employed in the joint work. I have seen as many as could stand by one another, holding down such a leaf, each drawing down with all his might, while others within were employed to fasten the glue. How they had bent it down I had not the opportunity of seeing, but it was held down by main strength, I easily proved by disturbing a part of them, on which the leaf bursting from the rest, returned to its natural situation, and I had an opportunity of trying with my finger the strength of these little animals must have used to get it down.[2]

The weaver ant's ability to build capacious nests from living leaves has undeniably contributed to their ecological success. The first phase in nest construction involves workers surveying potential nesting leaves by pulling on the edges with their mandibles. When a few ants have successfully bent a leaf onto itself or drawn its edge toward another, other workers nearby join the effort. The probability of a worker joining the concerted effort is dependent on the size of the group, with workers showing a higher probability of joining when group size is large.[15] When the span between two leaves is beyond the reach of a single ant, workers form chains with their bodies by grasping one another's petiole (waist). Multiple intricate chains working in unison are often used to ratchet together large leaves during nest construction. Once the edges of the leaves are drawn together, other workers retrieve larvae from existing nests using their mandibles. These workers hold and manipulate the larvae in such a way that causes them to excrete silk. They can only produce so much silk, so the larva will have to pupate without a cocoon. The workers then maneuver between the leaves in a highly coordinated fashion to bind them together.[2] Weaver ant's nests are usually elliptical in shape and range in size from a single small leaf folded and bound onto itself to large nests consisting of many leaves and measure over half a meter in length. The time required to construct a nest varies depending on leaf type and eventual size, but often a large nest can be built in significantly less than 24 hours. Although weaver ant's nests are strong and impermeable to water, new nests are continually being built by workers in large colonies to replace old dying nests and those damaged by storms. 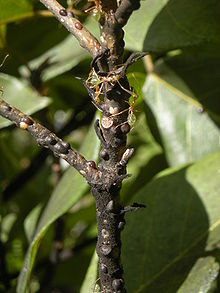 Large colonies of Oecophylla weaver ants consume significant amounts of food, and workers continuously kill a variety of arthropods (primarily insects) close to their nests. Insects are not only consumed by workers, but this protein source is necessary for brood development. Because weaver ant workers hunt and kill insects that are potentially harmful plant pests, trees harboring weaver ants benefit from having decreased levels of herbivory. They have traditionally been used in biological control in Chinese and Southeast Asian citrus orchards from at least 400 AD.[16][17] Many studies have shown the efficacy of using weaver ants as natural biocontrol agents against agricultural pests.[18] The use of weaver ants as biocontrol agents has especially been effective for fruit agriculture, particularly in Australia and southeast Asia.[19][20] Fruit trees harboring weaver ants produce higher quality fruits, show less leaf damage by herbivores, and require fewer applications of synthetic pesticides.[20][21] Farmers in southeast Asia often build rope bridges between trees and orchards to actively recruit ants to unoccupied trees. Established colonies are often supplemented with food to promote faster growth and to deter emigration.

Oecophylla colonies may not be entirely beneficial to the host plants. Studies indicate that the presence of Oecophylla colonies may also have negative effects on the performance of host plants by reducing fruit removal by mammals and birds and therefore reducing seed dispersal and by lowering the flower-visiting rate of flying insects including pollinators.[22][23] Weaver ants also have an adverse effect on tree productivity by protecting sap feeding insects such as scale insects and leafhoppers from which they collect honeydew.[23][24] By protecting these insects from predators they increase their population and increase the damage they cause to trees.[25]