La Cienega Boulevard is a major, well-known north–south arterial road that runs between El Segundo Boulevard in El Segundo, California on the south and the Sunset Strip/Sunset Boulevard in West Hollywood.

It is unusual among most Southern California roadways in that part of it was built to freeway standards in the late 1940s as part of the proposed Laurel Canyon Freeway, part of State Route 170. The SR 170 freeway was never completed south of U.S. Route 101, and the stretch of La Cienega from just north of Fairview Blvd in Inglewood, through the Baldwin Hills and along the Kenneth Hahn State Recreation Area to Rodeo Road in Los Angeles is a divided, limited access highway with few traffic signals. As such, emergency call boxes like those found along the area's freeways were installed along that stretch in the 1970s.

From south of Fairview and from north of Rodeo, La Cienega Boulevard is a regular surface street and one of Hollywood's major thoroughfares. Offices for A&E Network, The History Channel and the Academy of Motion Picture Arts and Sciences are located on La Cienega as are the studios of Citadel Broadcasting flagships KABC and KLOS, two of Los Angeles' biggest radio stations. A portion of La Cienega in and adjacent to Beverly Hills is known as "Restaurant Row" for its large number of upscale restaurants. South of Olympic, La Cienega is known for its large number of automotive-related business including several used car dealerships and many body shops and auto mechanics.[1] 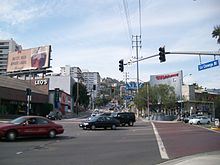 La Cienega Boulevard is named after Rancho Las Cienegas Mexican land grant roughly in the region now called "West Los Angeles." The Spanish phrase la ciénaga translates into English as "the swamp" and the area named "Las Ciénegas" was a continual marshland due to the course of the Los Angeles River through that area prior to a massive southerly shift in 1825 to roughly its present course. The difference in spelling between the Spanish word ciénaga and the name of the thoroughfare originated with the name of the rancho.

La Cienega Boulevard is referenced in the Ryan Adams song, "La Cienega Just Smiled" on his album Gold. Additionally, the 2004 Mountain Goats album The Sunset Tree begins with the line "I checked into a bargain-priced room on La Cienega". Most recently, Smoke or Fire referenced the boulevard on their song "California's Burning," in the lyric, "Alone and walking down, the ashes cover ground along La Cienega."

On June 14, 1989, Zsa Zsa Gabor slapped a policeman who pulled her over on La Cienega Boulevard. 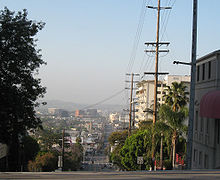 Looking south down La Cienega Blvd. from the intersection with Sunset Blvd.

The area of La Cienega Boulevard, from Beverly Boulevard to Santa Monica Boulevard, and its satellite streets is known as the La Cienega Design Quarter. Its shops and galleries house many antiques, furniture, rugs, accessories and art.

The entire route is in Los Angeles County.