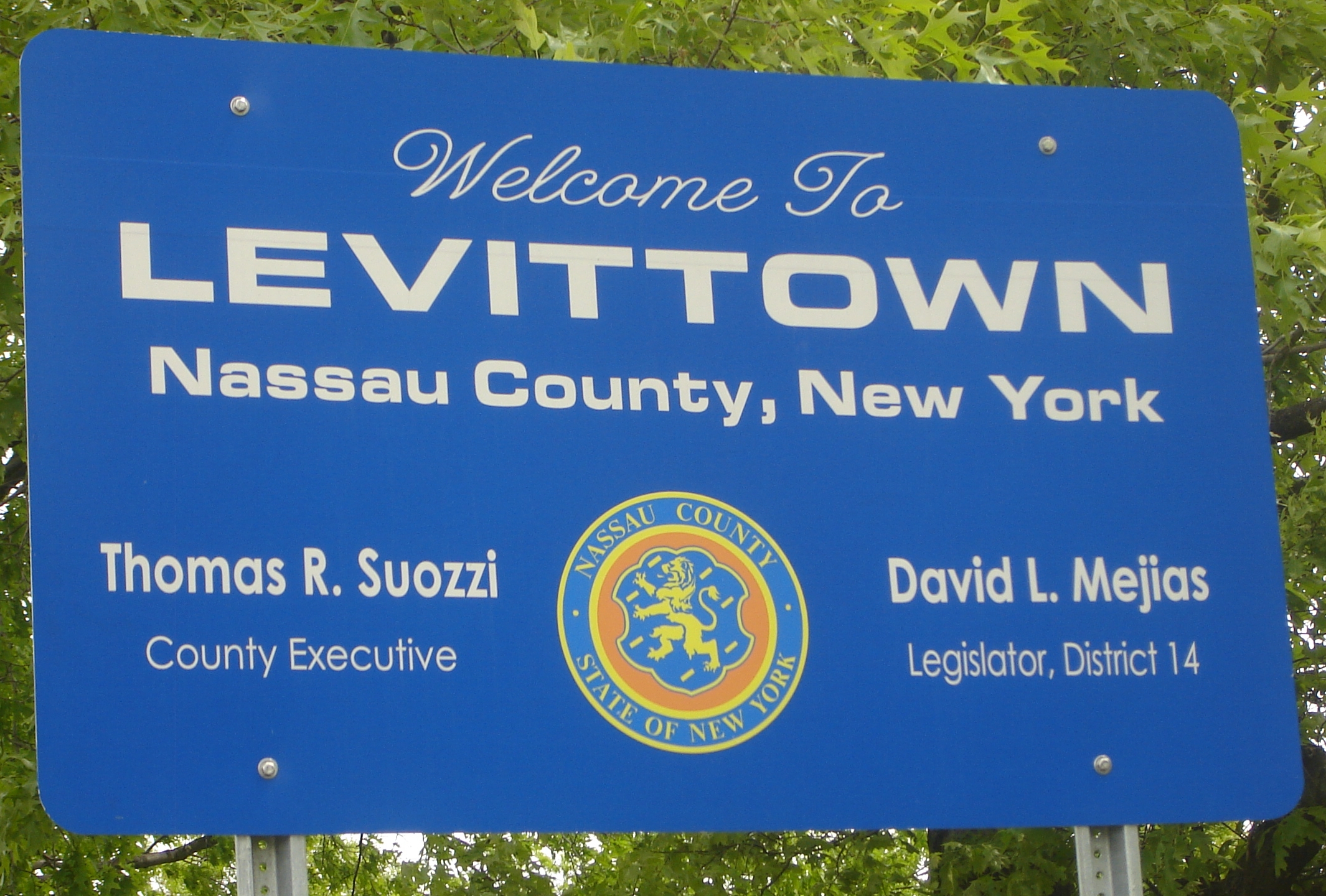 Levittown, a of New York City, is a hamlet in the located on in . Levittown is mid way between the villages of and . As of the 2000 census, the community had a total population of 53,067.

Levittown gets its name from its builder, the firm of Levitt & Sons, Inc., which built it as a between 1947 and 1951. Levittown was the first truly mass-produced and is widely regarded as the archetype for postwar suburbs throughout the country.

The building firm, Levitt and Sons, headed by and his two sons, William and Alfred, built four planned communities called "Levittown" (in , Pennsylvania, New Jersey and Puerto Rico), but Levittown, New York was the first and most famous. Levitt and Sons designs are prevalent in the older portion of , .

Levittown was built on what used to be potato farms in an area previously known as Island Trees. On May 7, 1947, Levitt and Sons publicly announced their plan to build 2,000 mass-produced rental homes for veterans on their Island Trees land. Two days later, the "" reported that 1,000 of the 2,000 proposed homes had already been rented. Levittown, as the new development would eventually be named, was off to a booming start.

To build their homes cheaply and quickly, Levitt and Sons wanted to eliminate basements and build on concrete slabs instead, as they had in . This practice was prohibited in the but, because the need for housing was so urgent, the Town modified their building code to allow the Levitts to proceed with their own plan.

Levitt and Sons used many of the building methods they had used over the years in previous developments but reorganized these methods for even better efficiency and cost savings. All the lumber was precut and shipped from a lumber yard they owned in where they erected a nail factory as well. An abandoned rail line was re-opened to bring construction materials to Island Trees. To keep costs down, non-union contractors were used, though this was met with heavy opposition. The production line technique used to build this new development was so successful that, by July 1948, the Levitts were turning out 30 houses a day.

Even at this pace, the Levitts couldn't keep up with the demand. Although all 2,000 homes had been rented almost immediately, hundreds of veterans were still applying, so the Levitts decided to build an additional 4,000 houses. The community soon had its own schools, its own postal delivery, even phone service and streetlights.

In 1949, Levitt and Sons discontinued building rental houses and turned their attention to building a larger, more modern house, which they called a "ranch" and which they would sell for $7,990. All a prospective buyer needed was a $90 deposit and payments of $58 per month. The Levitt ranch measured convert|32|ft|m|1 by convert|25|ft|m|1 and came in five different models, differing only by exterior color, roof line, and the placement of windows. Like previous Levitt homes, the ranch was built on a concrete slab with hot-water pipes, had no garage, and came with an expandable attic. The kitchen was outfitted with a stove and refrigerator, stainless steel sink and cabinets, the latest Bendix washer, and a York oil burner. Immediately, the demand for the new Levitt ranches was so overwhelming that even the procedure for purchasing them had to be modified to incorporate "assembly line" methods. Once these techniques were put into action, a buyer could choose a house and sign a contract for it within three minutes.

So great and so far-reaching was the success of the Levittown community that on July 3, 1950 William Levitt was featured on the front cover of "Time" magazine. This success continued throughout 1950 and 1951, by which time the Levitts had constructed 17,447 homes in Levittown and the immediate surrounding areas. As the GI homeowners settled into well-paying jobs and began to spawn families, the Levitt models and the surrounding community were modified to suit the needs of growing families. 1950 ranches came with a carport and a 12-1/2 inch Admiral TV set built into the living room staircase. The 1951 model included a partially finished attic. "Thousand Lanes", a magazine devoted to the decorating, expanding, and remodeling of Levitt homes became a must-have for Levittown residents. Shopping centers, playgrounds, and a $250,000 community center sprang up to accommodate Levittown's active residents.

As the second (The first was Oliver Rousseau and David Bohannon who planned a community in San Lorenzo, CA) and one of the largest mass-produced suburbs, Levittown quickly became a symbol of postwar suburbia, for good and for bad. Although Levittown provided affordable houses in what many residents felt to be a congenial community, critics damned its homogeneity, blandness, and racial exclusivity (the initial lease prohibited rental to non-whites). Today, "Levittown" is used as a term of derogation to describe overly-sanitized suburbs consisting largely of tract housing. Oddly enough, although Levittown is remembered largely for its homogeneity and conformism, the houses of Levittown have by now been so thoroughly expanded and modified by their owners that their original architectural form can be quite difficult to see.

Levittown has become so ingrained in American culture that the in Washington would like to put on display an entire Levittown house. Bill Yeingst, a historian with Smithsonian's National Museum of American History Domestic Life Division [cite web
url=http://americanhistory.si.edu/about/staff.cfm?key=12&staffkey=278
title=NMAH | William H. Yeingst
publisher=americanhistory.si.edu
accessdate=2008-10-08] said "An original ranch model would be ideal. We would like someone to donate their Levittown house, or we would like to find a donor to provide the funds so that we could secure a Levittown house." He noted that "The stories played out in suburban Levittown are the stories of America. They are stories important to everyone." Although "None of this is set in concrete," according to Mr. Yeingst, "the Levittown house would be dismantled at the site, transported to Washington and reconstructed. Then it would exhibited along with other innovations in American home life." [cite news
url=http://query.nytimes.com/gst/fullpage.html?res=950DE1DD1F3EF936A35752C1A96F948260
title=LONG ISLAND JOURNAL - New York Times
publisher=New York Times Company Inc.
date=1989-11-05
accessdate=2008-10-08
last=Ketcham
first=Diane]

In 1982 Island Trees gained national attention from the United States Supreme Court case "Board of Education v. Pico". The case determined that students' first amendment rights were violated when the school board removed several books it found objectionable from the high school's library.

While there is no passenger train operation in Levittown, the provides service from the Hicksville station, which serves the Port Jefferson and es, and the Wantagh station on the Montauk-Babylon branch. Both lines run east-west between New York's Pennsylvania Station and points east on Long Island.

Fire:Levittown is protected by three s, the with 231 members operating out of 3 stations, Station 3 of the which covers portions of Levittown west of Division Avenue and Station 2 of the which serves portions of Levittown South of Abbey Lane School. [cite web
url=http://www.nassaucountyny.gov/mynassauproperty/main.jsp
title=Land Record Viewer
publisher=www.nassaucountyny.gov
accessdate=2008-10-09]

Police:Levittown is patrolled by the eighth precinct of the

Has one main Post Office located at 180 Gardiners Ave.

* The 1954 Levittown documentary "A City Is Born" featured an interview with creator William J. Levitt, aerial views of the development, and a 45-second time-lapse sequence showing one of the houses being constructed.

*
*
* - another Levittown which has since reverted to its original name