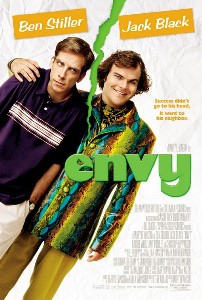 "Envy" is a 2004 , starring and Jack Black and was directed by . The film was a disaster with both critics and audiences. It currently has a freshness rating of a lowly 6% percent on Rotten Tomatoes review aggregate. The film had been stalled for some time, and it was only the success of "" that prompted the distributors to release the film to theatres. Many scenes were cut out of the film due to bad test screenings, evidence of this can be viewed in the "Envy" trailers. 's role as a private investigator was also deleted from the film. Originally scheduled for release on May 30, 2003, it was finally released 11 months later on April 30, 2004. Filming of the movie took place in the summer of 2002.

Tim and Nick (played by Stiller and Black) are best friends who are also neighbors and co-workers at . Nick is constantly coming up with crazy ideas to get rich quick, and when he invents Vapoorize, a spray that instantly removes dog excrement, he actually succeeds.

As Nick's wealth continues to grow, so does Tim's jealousy, as he had initially scoffed at the idea and squandered an opportunity to invest $2,000 and become mega-rich himself. Nick is blissfully unaware of Tim's jealousy, and his generosity only serves to make Tim more envious of him.

After a drunken night out, Tim accidentally kills his neighbor's beloved horse, Corkey, and straight away tries to hide the body so Nick does not find out.

With the help of J-Man, he succeeds in this, but his jealousy continues to grow, as does Tim's wife's anger - she blames him for them not being rich like their friends.

One night, Nick reveals that he is going to Rome for the debut of vapoorize there, and gives Tim the opportunity to now join him in a 50/50 partnership.

J-Man finds out that Tim is now rich, and immediately tries to gain from this, but fails. When Tim shoots another arrow off towards his house and strikes J-Man in the back.

At the end of the movie, Corkey is seen floating down a river behind a press conference, and the animal hospital must do tests on him to reveal how he died. It is found that the horse was actually poisoned - Corkey had been eating poop transported into J-Man's closet.

Straight away Vapoorize is pulled from the shelves in all stores, and Nick and Tim almost lose all their wealth and glory - until Tim comes up with an invention of his own - Pocket Flan, inspired by Nick and his family's love for the dessert.

This was the first co-production between and since 1999, and the first film produced by the latter to be distributed by the former since that same year, when Castle Rock switched distribution to most of its films to Pictures. also co-produced the film, and handled US distribution.

The film had been shot almost two years before its release, and was in danger of going straight-to-video in the US due to poor audience response during test screenings. It was only due to Jack Black's "" (2003) that it finally got a theatrical release. Nevertheless, the film performed poorly in US theaters, so much that it was released straight-to-video in Europe and Australia.

At the 2004 , during a press conference for "" (2004), both Jack Black and ' Jeffrey Katzenberg publicly apologized for Envy.