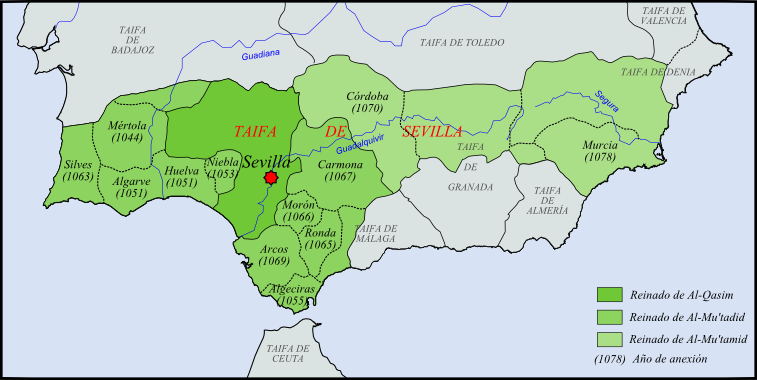 The of Seville (Arabic: طائفة أشبيليّة, "Ta'ifa Ishbiliya" )was a short lived kingdom in what is now southern and . The kingdom originated in and lasted until . It was under the rule of the Arab family. The first king of Seville was Abu al-Qasim (1023-1042). He was of and declared independence of the province of Seville from after its downfall in , becoming king of Seville as Abbad I. The second king was his son Abbad II Al-Mu'tadid (1042-1069) and last king in the dinasty was the king Al-Mu'tamid (1062-1091).

The kingdom started as a small, weakly defended territory comprising parts of current Spanish provinces of , and , but quickly emerged as the most powerful Taifa kingdom of the time, after its rulers began pursuing a policy of expansion. After several military campaigns, the kingdom achieved dominance over all of Western and . Nevertheless, the Abbad family was still subject to taxation by the King of Castile, to whom they were s. The drain of these taxes weakened the kingdom's power, and the country was conquered, in 1091, by the , after the ravaged the city of Seville and Al-Mu'tamid ordered his sons to give up the royal fortress (early ) for saving their lifes. He died as prisoner assassinated in 1095 in Africa. After his death of King Al-Mu'tamid the kingdom was totally ruled by the . Al-Mu'tamid had strongs relations with the northern kingdoms of Iberia, as Castile but he finally supported the military movements of the . The Almoravids did not respected the andalusi king and his court, and he was then made prisoner by the almoravid chief, to whom he had lent support.

Besides the intrigues and the conquerings eagerness of the kings, many artists of the time moved to the court of Seville, as the poet Ibn al-Abbâr, author of epistoles, and the poet Abû `Âmir ibn Maslama and Abû l-Walîd al-Himyarî, that made a compilation of the literary works of both ones.

Al-Mutadid also was a very remarkable poet, learned by the poet Abu Bakr ibn Ammar. On the other hand, he had a very cruel personality. His son Al-Mu'tamid was even more dedicated to poetry than his father. He was friend of the poet Abu Bakr Muhammad Ibn al-`Ammâr, who was famous at that time after defeating the Castilian king Alfonso VI in a contest.

Al-Mu'tamid sons, y were also very interested on arts, but had any interests on politics, and after the death of the king Al-Mu'tamid, the Taifa of Seville was ruled by the Almoravids.

There are chronicles of that time that tells Almoravids fought under a white flag, while Andalusies soldiers as those of King Al-Mu'tamid fought under different green flags with islamic texts written on them. This is supposed to be the origin of the flag, current used as the autonomous region flag, called or Arbondaira.