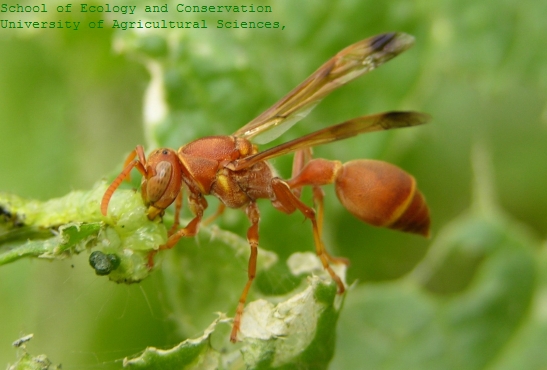 Ropalidiini is a tribe of s inhabiting the , and n biogeographical regions.

"Ropalidia marginata"is an Old world species of paper wasp found in peninsular India, Sri Lanka, South-east Asia and Australia (Vecht 1941, 1962; Das and Gupta 1983, 1989). This species has an aseasonal, indeterminate and perennial colony cycle, which means that nest initiation occurs round the year, and nests are active throughout the year (Gadagkar et al., 1982; Shakarad and Gadagkar 1995; Chandrashekara et al.,1990; Gadagkar 1991). They make gymnodomous nests (open, not covered by an envelop) with one or more petioles, which they coat with ant-repellant chemicals. The nests are usually found in closed spaces with small openings, inside bushes and within various man-made structures like electric poles, broken pillars, crevices of buildings, electric cable boxes, switch boards, tube light holders, the bottom of park benches, and even from within dustbins and letter boxes. Nests that can be accessed only through very small openings are well protected from the hornets "Vespa tropica", which are the prime predators of these wasps. Nest sizes range from 0 to 722 cells (mean ± s.d.: 133.7 ± 119.2), with 1 to 200 females (mean ± s.d.: 21.9 ± 22.3) and 0 to 33 males (mean ± s.d.: 2.4 ± 5.4) (Gadagkar et al., 1982). Males are produced aseasonally, and are thus found throughout the year in a subset of nests in the population. There is only a single queen in any nest of "R. marginata", and she is not morphologically distinguishable from the workers. The nests are made of paper, which is produced by masticating cellulose (collected usually from plant sources) and mixing it with saliva. The queen lays a single egg per cell, and the larvae grow inside the cells, being fed by the workers. The largest larvae spin a cap of silk on their cells and pupate inside. "R. marginata" nests can be founded either by solitary or multiple foundresses, and nest usurpation, adoption and joining are also quite commonly observed (Shakarad and Gadagkar 1995). A female wasp eclosing on a nest at any time of the year has several options open to her. She can (i) leave her natal nest and start her own single foundress colony; (ii) leave her natal nest and initiate or join other multiple foundress colonies along with her nestmates or with wasps from other nests; (iii) stay in her natal nest as a worker; (iv) stay in the natal nest as a worker for some time and then drive away the queen and take over as the new queen of the colony (Gadagkar, 2001). It is clear that this versatility in the options for the workers provides a platform for potential conflict in the "R. marginata" society, and the fact that the queen is able to maintain complete reproductive monopoly makes this an excellent model for studying the evolution of co-operation in a primitive society.

Das, B. P. and Gupta, V. K. (1983). A catalogue of the families Stenogastridae andVespidae from the Indian subregion (Hymenoptera: Vespoidea). Oriental Insects 17,395–464.

Das, B. P. and Gupta, V. K. (1989). The social wasps of India and the adjacentcountries (Hymenoptera: Vespidae). Gainseville, Fla: The Association for the Studyof Oriental Insects.