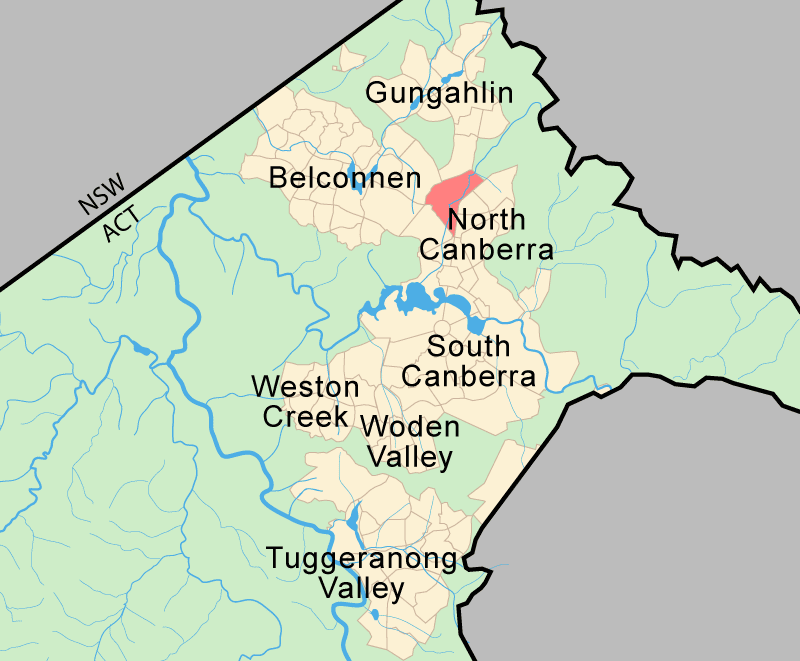 Lyneham is a suburb of , in the . It is named after Sir , premier of the Australian state of from 1899 to 1901. The suburb was gazetted in 1928, but development did not commence until 1958. Like many other suburbs in inner Canberra, it is currently undergoing gentrification.

The suburb has experienced increasing popularity in recent years, evidenced by its high turnover rate: only 1,709 (42%) of its residents were at the same address 5 years prior to the 2001 Census. This is probably due to the large number of students in the suburb (Lyneham is a short distance from both the in Acton and the in Bruce) as well as the changing cost of living in the suburb (in the last 10 years the median house price has risen from $145,000 to $377,000.

Lyneham boasts many attractions for young and old including nature parks and bushland, proximity to the centre of Canberra, popular cafes including the famous Devine Cafe and Gallery as well as the Front cafe and gallery, and a number of sporting facilities including the National Hockey Centre, Canberra Racecourse and the ACT Netball Centre. Every year Australia's best known car festival, , is held at the neighbouring [http://www.epic.act.gov.au Exhibition Park In Canberra (EPIC)] and nearby Dickson plays host to some of the best multicultural restaurants to be found in Australia's capital.

St Ninian's Uniting Church in Brigalow Street is the second-oldest church in Canberra, opened in 1873. It was founded as a Presbyterian Church by the Scottish community, many of whom had come to the area as shepherds. [cite web
title = A Brief History of the Church
publisher = St Ninian's Uniting Church
url = http://www.stninians.org.au/BriefHistory.htm
accessdate = 2006-10-24 ]

The style of the suburb has been evolving since development commenced in 1958. Older heritage style homes sit beside modern townhouse developments. Being one of the older suburbs in Canberra, Lyneham residents enjoy its leafy streets and established gardens. The streets are mostly named after artists and those associated with the development of Canberra in the early years. [cite web
title = Place Names
publisher = ACT Planning and Land Authority
url = http://www.actpla.act.gov.au/actlic/places/search/suburbResults.asp?suburbName=LYNEHAM&Submit=Continue
accessdate = 2006-11-16 ]

For Information about Lyneham High School please go to the link above.

[http://www.lynehamps.act.edu.au/ Lyneham primary] has 300 to 400 students. After many years of declining enrolments there was a dramatic increase in enrolments in 2005. This was the first school in the ACT to increase enrolments after a long period of decline. Fact|date=February 2007

The part of Lyneham north of was a relatively recent addition to the suburb of Lyneham, being built in the mid to late 1980s, while the rest of Lyneham dates back to the 1960s.

Residents of this area sometimes think of it as a separate suburb, even though it is part of the suburb of Lyneham. The area has one main road, Cossington Smith Crescent, which loops through the area with other streets coming off it. It also has a small shopping centre housing shops, a couple of restaurants and a number of small businesses.

North Lyneham backs onto a bush reserve which separates it from the suburb of . The walking trails in the reserve are popular with the local residents and provide scenic views of the inner northern suburbs of to the east and south and and the to the west.

calcareous s from the Canberra Formation is overlain by Quaternary alluvium.This rock is the of the original title of Canberra "Limestone Plains".
from the age Pittman Formation is in the north west. [Henderson G A M and Matveev G, Geology of Canberra, Queanbeyan and Environs 1:50000 1980.]