Defacement is a term used in heraldry and vexillology to refer to the addition of a symbol or charge to another flag.[1][2] For example, the Australian flag is the British Blue Ensign defaced with the Southern Cross in the fly and the Commonwealth Star in the lower hoist quarter, beneath the Union Flag.

In the context of vexillology, "deface" carries no negative connotations, in contrast to general usage. It simply indicates differentiation of the flag from that of another owner by addition of elements. For example, many state flags are formed by defacing the national flag with a coat of arms. 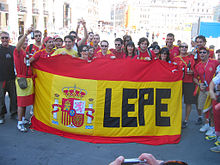 At the 2006 FIFA World Cup, fans from Lepe support Spain

It is common for association football supporters travelling abroad for a match to bring a national flag defaced with the name of their home town or a similar local identifier.