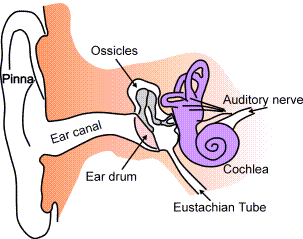 Caption = Anatomy of the human ear.

The ear canal (external auditory meatus, external acoustic meatus), is a tube running from the to the . The human ear canal extends from the pinna to the and is about 26 mm in length and 7 mm in diameter.

The ear canal, because of its relative exposure to the outside world, is a common victim of diseases and other disorders. Some disorders include:
* (swimmer's ear), bacteria-caused inflammation of the ear canal
* of the ear canal
* Ear fungus
* Ear , an extremely rare infestation of maggots
* Bone exposure, caused by the wearing away of skin in the canal
*, a usually caused by tympanostomy tubes
*, a gradual closing of the canal
*Foreign body in ear
*s in animals.

Earwax, also known as cerumen, is a yellowish, waxy substance secreted in the ear canals. It plays an important role in the human ear canal, assisting in cleaning and lubrication, and also provides some protection from bacteria, fungi, and s. Excess or impacted cerumen can press against the eardrum and/or occlude the external auditory canal and impair hearing.