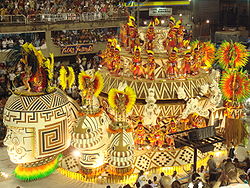 The Grêmio Recreativo Escola de Samba Mocidade Independente de Padre Miguel is a samba school of the city of Rio de Janeiro, being located on Rua Coronel Tamarindo, in the neighborhood of Padre Miguel.

The Mocidade was founded on November 10 of 1955, by eight people: Silvio Trindade, Renato da Silva, Djalma Rosa, Olímpio Bonifácio (Bronquinha), Garibaldi F. Lima, Felipe de Souza (Pavão), Altamiro Menezes (Cambalhota) e Alfredo Briggs. The first flag of the school was offered by Mrs. Gilda Faria Lima. The first queen of the school was Mrs. Neuza de Oliveira. The samba school participated for the first time, in an official parade, with the plot "O Baile das Rosas" ( "The Ball of Roses" ), when it got 5th place. In 1958, it was the champion of Group 2 with the plot "Apoteose ao Samba" ( "Apotheosis to the Samba" ). From 1959 forth, it took on Group 1 and did not descend to lower groups anymore.

In 1959, the bateria, under the expert Master André, gave for the first time the famous "paradinha" (the instant when the bateria of the school stops playing for some instants and during this period the samba-enredo is maintained with the song of the interpreters and of the members of the school) in front of the judging committee, maintaining the rhythm so that the school would continue developing. The folk would pass, later, to accompany such "bossa" with the shout of "Olé". During this period, the Mocidade was known as "a bateria that carried a school on its back", because the bateria was more known than the school itself, that only years later would become a school that would compete with the famous of that epoch (Portela, Império Serrano, Salgueiro, and Mangueira).

In the year of 1974, Arlindo Rodrigues presented the plot "A Festa do Divino" ( "The Party of the Divine" ), getting 5th place. But on that same year the school could win the championship, had she not gotten 4 in clothings and 9 in harmony. The difference between Salgueiro and Mocidade was 6, therefore they would have tied only if Mocidade would have gotten 10. Even if they would tie, Salgueiro would win the championship because it got 10 in harmony.

From then on, the school stopped being known only because of the bateria, and became known as a good samba school. In 76, by irony, Mocidade tied second place, with Mangueira, and lost the decision for getting one point less in the so famous bateria. In 1979, still with Arlindo Rodrigues, Mocidade conquered for the first the championship with "O Descobrimento do Brasil" ( "The Discovery of Brazil" ).

Next year, Fernando Pinto assumed the carnaval, producing exceptionals carnivals in Mocidade and becoming known as the most criative and ingenious carnival producer ever known.

In Fernando Pinto's fisr year in Mocidade, in 1980, the school conquered second place with the plot "Tropicália Maravilha" ( "Splendid Tropicália" ). In 1983, Mocidade received the banner of the best communication with the public with the plot "Como era verde o meu Xingu" ( "How was my Xingu Green" ).

Mocidade in the Sambadrome Era

The Independents of Padre Miguel

Big Performers of the School 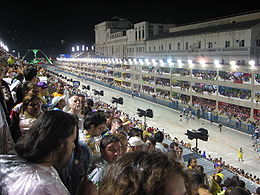