The Rockwell X-30 was an advanced technology demonstator project for the National Aero-Space Plane (NASP), part of a United States project to create a single-stage-to-orbit (SSTO) spacecraft and passenger spaceliner. It was cancelled in the early 1990s, before a prototype was completed, although a lot of development work in advanced materials and aerospace design was completed. While a goal of a future NASP was a passenger liner capable of two hour "trips" from Washington to Toyko, the X-30 was planned for a crew of two and oriented towards testing.

The NASP concept is thought to have come from the "Copper Canyon" project, in Defense Advanced Research Projects Agency (DARPA), running from 1982 to 1985. In his 1986 State of the Union address, President Ronald Reagan called for "a new Orient Express that could, by the end of the next decade, take off from Dulles Airport, accelerate up to 25 times the speed of sound, attaining low earth orbit or flying to Tokyo within two hours."

Research suggested a maximum speed of Mach 8 for scramjet based aircraft, as the vehicle would generate heat due to atmospheric friction, which would thus cost considerable energy. The project showed that much of this energy could be recovered by passing hydrogen over the skin and carrying the heat into the combustion chamber: Mach 20 then seemed possible. The result was a program funded by NASA, and the United States Department of Defense (funding was approximately equally divided between NASA, DARPA, the US Air Force, the Strategic Defense Initiative Office (SDIO) and the US Navy).[1]

In 1990, the companies joined under the leadership of Rockwell International to develop the craft to deal with the technical and budgetary obstacles. Development on the X-30, as it was then designated, continued until 1993, when it was terminated amid budget cuts and technical concerns. 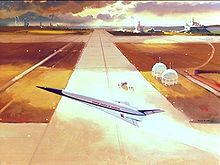 Artist's Concept of the X-30 in orbit

Artist's Concept of the X-30 on reentry 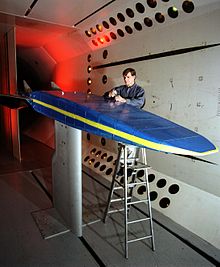 X-30 model in a wind tunnel

The X-30 configuration was a highly integrated engine. The shovel-shaped forward fuselage generated a shock wave to compress air before it entered the engine. The aft fuselage formed an integrated nozzle to expand the exhaust. The engine between was a scramjet engine. At the time, however, no scramjet engine of the kind was close to operational.

The aerodynamic configuration was an example of a waverider. Most of the lift was generated by the fuselage by compression lift. The "wings" were small fins providing trim and control. This configuration was efficient for high-speed flight, but would have made take-off and slow-speed flight difficult.

Temperatures on the airframe were expected to be 980 °C (1800 °F) over a large part of the surface, with maximums of over 1650 °C (3000 °F) on the leading edges and portions of the engine. This required the development of high temperature lightweight materials, including alloys of titanium and aluminium called gamma and alpha titanium aluminide, advanced carbon/carbon composites, and titanium metal matrix composite (TMC) with silicon carbide fibers. Titanium matrix composites were used by McDonnell Douglas to create a representative fuselage section called "Task D". The Task D test article was four feet high by eight feet wide by eight feet long. A carbon/epoxy cryogenic hydrogen tank was integrated with the fuselage section and the whole assembly, including volatile and combustible hydrogen, was successfully tested with mechanical loads and a temperature of 820 °C (1500 °F) in 1992, just before program cancellation.

Despite progress in developing the necessary structural and propulsion technology, NASA still had substantial hurdles to overcome. The Department of Defense wanted it to carry a crew of two and even a small payload. The demands of being a man-rated vehicle, with the instrumentation, environmental control system, and safety equipment, made X-30 larger, heavier, and more expensive than required for a technology demonstrator. The result was a cancellation of the X-30 and a move toward a more modest hypersonic program that culminated in the unmanned X-43 "Hyper-X", which is essentially an unmanned scaled-down X-30. A large, detailed scale mock up of the X-30 was built by engineering students at Mississippi State University's Raspet Flight Research Lab in Starkville, Mississippi. The mock-up is on display at the Aviation Challenge campus of the U.S. Space Camp facility in Huntsville, Alabama.

2. Air Force History of the NASP