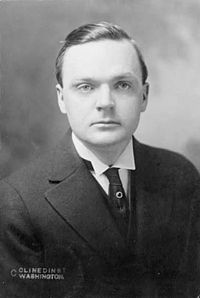 The son of Tammany Democratic official William C. Malone and Rose (McKenny) Malone, Dudley Field Malone was a lawyer and member of the Democratic Party who served as the collector of the Port of New York (1913–1917) and resigned to protest the failure of the Woodrow Wilson Administration to advocate a Woman Suffrage Amendment. The next year, he won the release of women's suffrage activists, imprisoned at the Occoquan Workhouse, by prevailing on appeal from their convictions for "unlawful assembly" by "obstructing the sidewalk" in front of the White House with their persistent anti-Wilson "silent sentinel" demonstrations led by Alice Paul. [1]

He subsequently served as Third Assistant Secretary of State for William Jennings Bryan under Woodrow Wilson.

In 1921, he married the writer and economist Doris Stevens, then in 1930 married Edna Louise Johnson.

For many years he made his primary living as an international divorce lawyer with offices in Paris.

In 1925 Malone was one of the lawyers who joined with Clarence Darrow to defend John T. Scopes in the famous "Monkey Trial". Responding to Bryan's argument against admitting scientific testimony, Malone gave arguably the greatest speech of the trial in defense of academic freedom. "I have never learned anything from any man who agreed with me," was one of his famous quotes.

After the trial, Malone returned to his divorce business. During the 1930s Malone moved to Beverly Hills and launched a new career as a dramatic actor, most notably playing Winston Churchill in the film Mission to Moscow (1943).