Maryknoll
This article is about the hill in New York and the Roman Catholic Church organizations named after the hill. For the Australian town, see Maryknoll, Victoria. 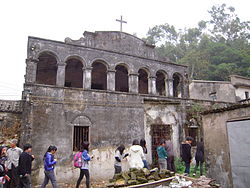 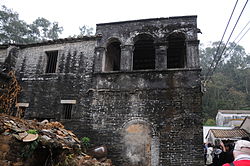 Ruins of an orphanage built by the Maryknoll Fathers in the early 20th century in Tian Tou, Chi Xi, Tai Shan, Guangdong Province, China. According to Fr. Thomas A Peyton, who now stations in Hong Kong, this was where the Maryknoll Fathers started their relief work in China. Photo taken on 2011 March 20. 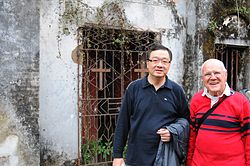 According to Fr. Thomas A Peyton, who now stations in Hong Kong, this is the first church built by the Maryknoll Fathers in China. Located in Yangjiang, Guangdong Province, China. The building has been turned into a small hostel run by the local parish. Revenue generated subsidises operation of the local church. Photo taken on 2011 March 20.

Maryknoll's headquarters are in the Village of Ossining, Westchester County, New York.

Maryknoll was established in 1911 as the Catholic Foreign Mission Society of America by the Bishops of the United States. Responsibility for its development fell to two diocesan priests, Fr. James Anthony Walsh of Boston and Fr. Thomas Frederick Price[2] of North Carolina, with the commission to recruit, send and support U.S. missioners in areas around the world. In the year following its founding, three men joined the community as members (i.e., persons fully committed to the mission work), and the first religious brother, Thomas McCann, took orders. The ranks of Brothers increased to ten by the end of World War I. The men joining during this period were generally skilled tradesmen; much of their early work consisted of constructing buildings. They were called the Brothers of St. Michael and their lodging, the "St. Michael’s Residence", can still be seen on the Maryknoll grounds.[3]

By 1921, the community consisted of 20 priests, a dozen brothers, and about 65 seminary students. The facilities were four wooden farm buildings, situated on a hill named "Mary's Knoll". A modern fieldstone building in the compound housed the offices of The Field Afar. (A large fieldstone seminary had been started, but would not be completed until the 1950s.) In addition to their studies, the students performed maintenance chores and helped take care of livestock. The seminary was not severe; they got some afternoons off to hike or ride bicycles in the surrounding Westchester hills.[4]

The first band of American missioners from the newly founded Maryknoll arrived in the Orient in the year 1918. There were four of them, viz.,

Fr. Walsh and Fr Meyer arrived first, Fr. Price and Fr Ford some weeks later. Their first point of debarkation in South China was Hong Kong (which was a British colony at the time) on 30 Oct 1918. While they were in Hong Kong, they stayed briefly with the Paris Foreign Mission Fathers at Battery Path[5]. From Hong Kong, they went to Yeungkong (now known as Yangjiang) and started their missionary work in China from there.

The number of missionaries in China had grown to 27 (25 priests and two Brothers) as of 1927. The missions were centered in and around Kong-Moon (known since 1951 as Jiangmen), whose six million inhabitants were plagued by the civil wars of the Warlord era, flooding, dysentery, bandits, and smallpox.[6]

A mission to Korea, begun in 1922, had also grown significantly by 1927, to 17 priests and two Brothers. It was centered in the north of Korea, around the city of Penyang.[6]

The early missionaries concentrated in East Asia, particularly China and Korea. During WW2, however, numerous South American countries were added as mission sites.[7]

A Maryknoll Centennial Time-line can be found at http://www.maryknoll.org/

The "Boys of Maryknoll"

Men played an important role at Maryknoll from the start. In 1911, several men joined the community as part of the The Field Afar staff. The Church officially recognized the Maryknoll Sisters as a religious community on February 14, 1920. A 1905 graduate of Smith College, Mollie Rogers, led the community under the name Aimaboy. The following year, brothers began to go abroad to join missions in China and Hong Kong. A Motherhouse was started in 1927 and (unlike the seminary building) completed within a decade.[3]

As of 2008, there are over 550 Maryknoll priests and Brothers serving in countries around the world, principally in Africa, Asia and Latin America. Throughout their history, especially in the first half of the twentieth century, Maryknoll missioners played a large role in the Catholic Church in East Asia where some missioners still work. Maryknoll also has extensive connections with many Latin American countries, where it has long worked to help alleviate poverty and bring constructive changes to the life of Latin America's poor. 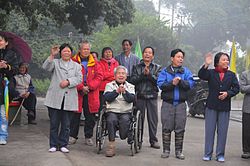 Residents at Gate of Heaven Leprosarium in Kongmoon 厓門倉山 Many of the buildings there erected by Bro Albert Staubli are still standing today. Photo taken on 2011 March 20.

5) Bishop Paschang Catholic School, formerly known as Bishop Paschang Memorial School, a co-educational primary school. This school was founded after the late Maryknoller, Bishop Adolph John Paschang, who had suffered a lot for his mission in China.