The Black Spiny-tailed Iguana, Black Iguana, or Black Ctenosaur (Ctenosaura Similis) is a lizard native to Mexico and Central America that has been introduced to the United States in the state of Florida. It is the largest species in the genus Ctenosaura and has been recorded as the fastest running lizard on earth.

The Black Spiny-tailed Iguana was first described by British zoologist John Edward Gray in 1831.[1] The generic name, Ctenosaura, is derived from two Greek words: cteno (Κτενός), meaning "comb" (referring to the comblike spines on the lizard's back and tail), and saura (σαύρα), meaning "lizard".[2] Its specific name is the Latin word similis meaning "similar to", a common description found in Linnean taxonomy when referring to a new taxa.[3]

Black Spiny-tailed Iguana have distinctive keeled scales on their long tails, which gives them their common name.[4] They are the largest members of the genus Ctenosaura, males capable of growing up to 1.5 meters (4 ft 11 in) in length and females slightly shorter at 1 meter (3 ft 3 in).[2] They have a crest of long spines which extend down the center of their back.[4] Although coloration varies extremely among individuals of the same population, adults usually have a whitish gray or tan ground color with a series of 4–12 well-defined dark dorsal bands that extend nearly to the ventral scales.[4] Males also develop an orange color around the head and throat during breeding season with highlights of blue and peach on their jowls.[2][4]

Black Spiny-tailed Iguanas are excellent climbers, and prefer a rocky habitat with plenty of crevices to hide in, rocks to bask on, and nearby trees to climb.[2] They are diurnal and fast moving, employing their speed to escape predators but will lash with their tails and bite if cornered.[2] The Guinness Book of World Records lists the running speed of this species at 21.7 mph or 34.9 km/h making it the world's fastest lizard.[2][5]

They are primarily herbivorous, eating flowers, leaves, stems, and fruit, but they will opportunistically eat smaller animals, eggs, and arthropods.[2] Juveniles tend to be insectivores becoming more herbivorous as they get older.

The Black Spiny-tailed Iguana is native to Central America, and has the widest range of all Ctenosaura species from the Isthmus of Tehuantepec to northeastern Nicaragua and western Panama on the respective Atlantic and Pacific coasts.[3][2] It is commonly found throughout Costa Rica, Honduras and has been reported in Colombia. In addition to its varied appearance it may interbreed with other Ctenosaur species throughout this range.

The Black Spiny-tailed Iguana has been introduced to South Florida and reproduces in the wild in several feral populations. On the south-eastern Florida coast, Black Spiny-tailed Iguanas have been found on Key Biscayne, Hialeah, and in Broward County. On the south-western Florida coast, it has been discovered on Gasparilla Island and in adjacent areas, throughout Lee and Charlotte counties.[6] This iguana has also been introduced to several islands in the Caribbean.[7] As this species will opportunistically feed on small vertebrates, such as fish, rodents, eggs, birds, and even hatchling sea turtles it may pose a threat to endangered native species.[6]

Mating generally occurs in the spring. Males show dominance and interest by head bobbing; eventually the male will chase the female until he can catch her and subdue her.[2] Within eight to ten weeks, the female will dig a nest and lay clutches of up to 30 eggs.[2] The eggs hatch in 90 days with the hatchlings digging their way out of the sand.[2] These juveniles are typically green with brown markings, although all brown hatchlings have been recorded as well.[4] 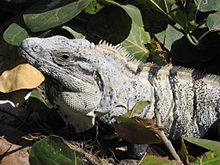 In some parts of Central America, the Black Spiny-tailed Iguana is farmed alongside the Green Iguana as a food source and for export for the pet trade; [2] see Iguana meat. Although it is heavily hunted it does not appear to be endangered in any of its native territory.