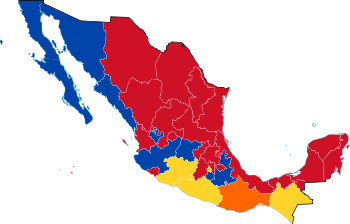 The United Mexican States, commonly known as Mexico, is a federation comprising thirty-one States and one Federal District, commonly known as Mexico City. The Head of Government of the Federal District is not considered a governorship, but the position is included on this list of governors for the sake of completeness. Article 115 of the current Federal Constitution states that for their internal government, the States shall adopt the popular, representative, republican form of government, with the free Municipality as the basis of their territorial division and political and administrative organization. All the governors of the States may not hold office for more than six years. The election of governors of the States and the local legislatures shall be direct and in the manner prescribed by their respective electoral laws. The governors of the States who hold office by regular or special election may not, in any case or for any reason, again occupy that office in an interim, provisional or substitute character, or be in charge of that office in any capacity. The constitutional governor of a State must be a Mexican citizen by birth and a native of the State or with actual residence therein for not less than five years immediately preceding the day of the election.

State Governors and Head of Government