The Wernerian Natural History Society (January 12, 1808 – April 16, 1858), commonly abbreviated as the Wernerian Society, was a learned society interested in the broad field of natural history, and saw papers presented on various topics such as mineralogy, plants, insects, and scholarly expeditions. The Society was an off-shoot of the Royal Society of Edinburgh, and from its beginnings it was a rather elite organization.

The Society was named after Abraham Gottlob Werner, a German geologist who was a creator of Neptunism, a theory of superposition based on a receding primordial ocean that had deposited all the rocks in the crust.[1] At this time all rocks, including basalt, and crystalline substances were thought by some to be precipitated from solution.[2] 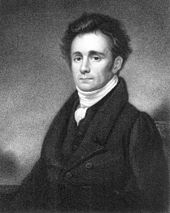 Robert Jameson, founder and life president of the Wernerian Society.

Robert Jameson, Regius Professor of Natural History at the University of Edinburgh, was the founder and life president of the Society. In 1800, he spent a year at the mining academy in Freiberg, Saxony, where he studied under Werner. The Society was founded on 12 January 1808, and the first meeting of the Society occurred on 2 March 1808.[1][3] Between 1811 and 1839 eight volumes of Memoirs of the Wernerian Natural History Society appeared. More than twelve of Jameson's papers on geology and mineralogy were published in these volumes, and he also contributed some on zoology and botany. Proceedings after 1839 were published in Jameson's Edinburgh New Philosophical Journal.[2] The Society hosted many of the notable scientists of its day.

There were no meetings from 1850–1856, which coincided with the decline of Jameson himself. It was eventually decided to close the Society down and dispose of its assets, and it finally closed on 16 April 1858.[1][3]

Members of the Wernerian Society were entitled to use the abbreviation M.W.S. after their name. "Corresponding members", based outside of Edinburgh, used the designation C.M.W.S.